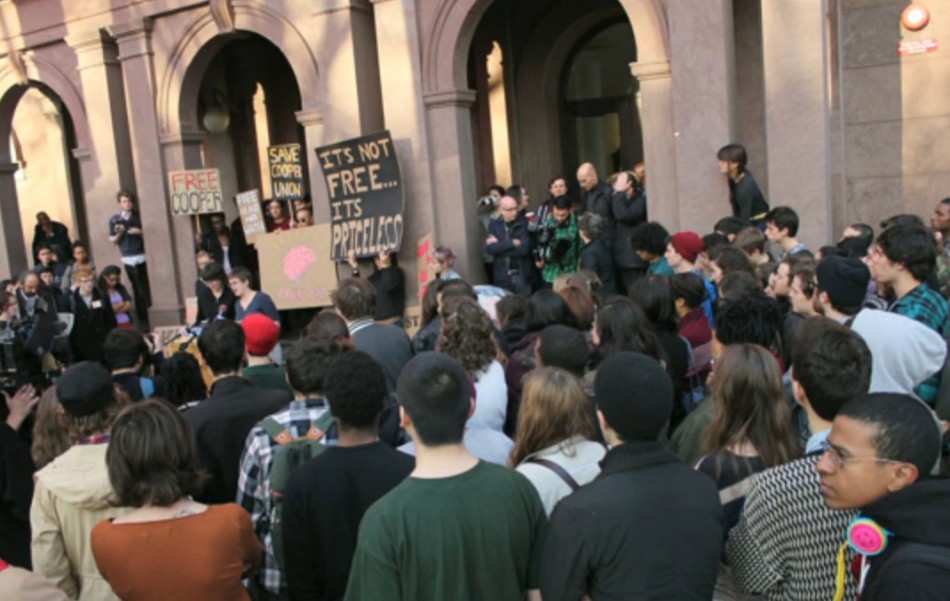 For one week, 11 art students at Cooper Union turned the top floor of the Foundation building into a media command center. They boarded themselves in with homemade wood and steel barricades, a hot plate, laptops, and cell phones; they issued communiqués, coordinated with students organizing on the outside via Skype, and talked with reporters. The move was an escalation in a series of salvos between students and the administration over the future of the school.

Free tuition for every student seems like a foreign notion, but for the students at Cooper Union, it is considered a right, because every accepted student, regardless of citizenship status or income level, receives a full scholarship. In order to manage the school’s precarious financial situation, which was exacerbated during the recent financial crisis, President Jamshed Bharucha announced the school would begin charging tuition to graduate students and more recently has hinted at the possibility of charging undergraduates tuition triggering a firestorm of dissent from students, alumni, and faculty.

“This was always in our minds as the next step,” said Tyler Berrier, a 21-year-old art student, and one of the eleven students who participated in the lock-in.

While initially the occupiers declared they wouldn’t leave the room until their demands had been met, including public affirmation of the value of free tuition and President Bharucha’s resignation, they left because they said they had accomplished what they had set out to do: spark a larger conversation around the value of higher education.

The occupying students worked in concert with other students who organized teach-ins, rallies, and hosted a series of lectures with academics, artists, and activists speaking about the burden of student debt. They worked in tandem with activists at Occupy Wall Street and broadened their scope to include students from CUNY and other schools.

“It was more of a catalytic action that would bring people together,” said Berrier.

The prospect of student debt is not far from Cooper Union students’ minds. According to a study by the Institute for College Access & Success, student loans average $25,600 per student for the class of 2011, up 5% from the previous year. Tuition at Cooper Union is valued at $38,550.

“It’s not something that I have to think about, having been able to go to Cooper, and being able to afford my living expenses,” said Casey Gollan, a senior in the school of art and another one of the occupiers talking about student debt. “But all of my friends deal with it.”

“It doesn’t seem like a sustainable solution for the world where students are given so much debt and they have to spend most of their lives paying it off,” he said.

Cooper Union is one of only a handful of schools that still offers its students a full scholarship. Founded by Peter Cooper, a member of the working class who eventually became a wealthy industrialist during the Industrial Revolution, free tuition for all has been a guiding principle of the school. Despite his eventual wealth, Cooper always considered himself part of the working class.

“He did not think of himself as a capitalist because he had come up from the trade and was largely uneducated,” said Peter Buckley, a historian in the humanities department at Cooper Union, who is currently working on a book about the history of the school. “It was supposed to be a free education for the working classes .” Cooper began the school as a night school so that working men and women “who wished to improve their chances in life” would be able to attend.

In order to cover operating costs, Cooper had a system where a small class of about 15 students, who could afford it, paid tuition to defray the costs for the rest of the students. This model continued until the early 1880s until the Cooper family rented out two floors of the Foundation Building that sits on Cooper Square and eradicated the amateur program. In its first capital campaign the Cooper family, along with a generous donation from Andrew Carnegie, established the school’s endowment.

In the August letter, President Bharucha tasked each of the three degree-granting institutions—Arts, Architecture, and Engineering—with the unenviable job of coming up with a solvency plan for their department, resulting in outcries from students, alumni, and faculty—many of whom believe that it was an underhanded move to force faculty to make the uncomfortable demand for undergraduate tuition.

“At the moment, they are outsourcing the decision, because even the trustees don’t want to be the ones getting rid of 100 years of tradition,” said Buckley.

“They are doing this work that is fundamentally against the mission of the school, their personal beliefs as educators and they are being intimidated into it,” said Kristi Cavataro, a junior in the art school, and one of the occupiers. “I know those of us in this room have a lot of faculty support in what we’re doing.”

Other groups have offered alternative financial plans, chief among them is Friends of Cooper Union, a coalition of alumni, faculty, and students dedicated to keeping the school financially solvent while protecting its centerpiece of free tuition for all.

“They’re building out these hybrid programs,” said Henry Chapman, a spokesperson for Friends of Cooper Union and a 2010 alumnus of the art program referring to establishing new graduate programs as a means to generate revenue. “It’s an extremely questionable path.”

Rather than pursue these revenue-generating graduate programs, which would require startup costs and which would not surmount the shortfall for the foreseeable future, Chapman argues that the school should focus on expense reduction while remaining a tuition-free institution. Friends of Cooper Union believes that implementing a tuition charge would ultimately work against the school because it would lose its main selling point, and ultimately make it less competitive.

“Tuition would certainly influence who applies and who elects to accept Cooper’s enrollment offers,”he said. “It would also diminish Cooper’s prestige and ability to attract leaders in the field of each discipline.”

Many students, faculty, and alumni believe that what is at stake is more than mere tradition, but rather an educational philosophy that has become endangered.

“Even a small embodiment of 19th century idealism can seem so unexplainable to a lot of people today,” said Professor Buckley. “These dreams were alive that anyone with talent could have a free higher education.”

“A lot of people want to look at Peter Cooper and the history of this place, but to me the stronger argument is the state of higher education today,” said Gollan. “It doesn’t make sense to give the next generation chains from the get-go.”

According to Buckley, Cooper himself would be horrified by the burden of student debt. “Debt was for his class a form of enslavement,” said Buckley. “I do think that if he were alive today he would see that college tuition loans were making a new form of enslavement for the American middle class.”

For now, students and faculty will have to wait to see what happens. The school has announced that it won’t make any plans until the new year.

“I’m just not willing to give in to that’s the way the world works,” said Gollan. “If we can stand up for it here and other places too like CUNY, it’s not going to have to be that way. Higher education is really worth it. But that cost can’t be passed to students over the course of the rest of their life.”