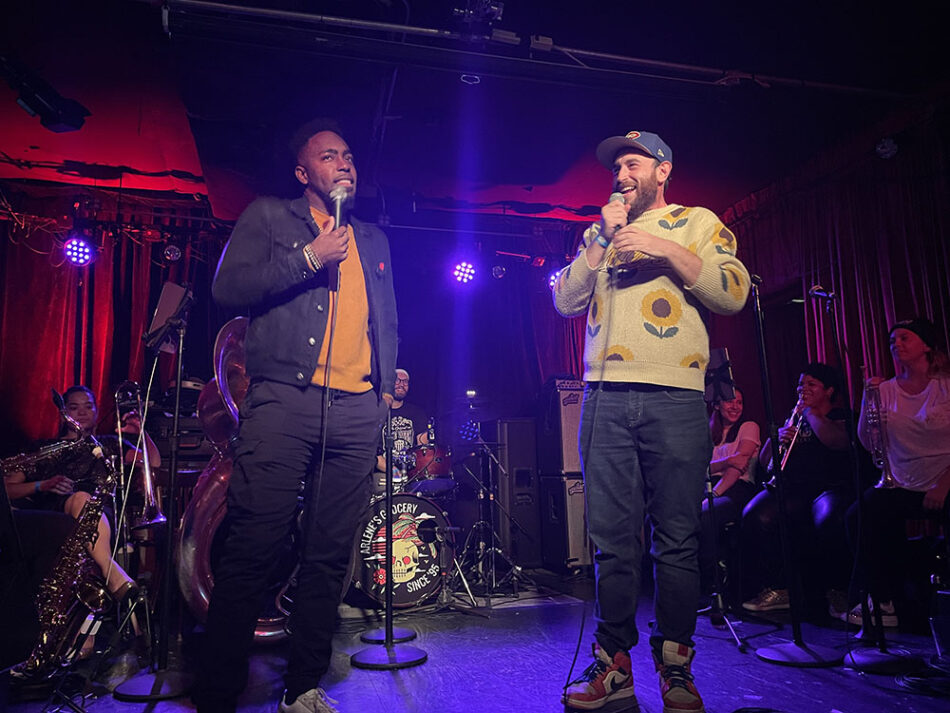 Eitan Levine and Drexton Clemons both realized that they were lying at the same moment. Standing on the stoop outside Arlene’s Grocery, they tried to recruit guests for that night’s edition of their comedy show NYC is Dead, but the lines they had used on passersby in the past were no longer true. Shouting “free comedy” at the passing pedestrians on Stanton Street, the comedians remembered that they weren’t performing for free in Central Park anymore; starting that night, tickets to NYC is Dead cost $20 so “free comedy” was out of date.

NYC is Dead is part comedy show, part concert, and altogether a group effort to find things to celebrate and laugh at in the face of Covid-19. Inspired by the former comedy club owner James Altucher’s op-ed in the New York Post “New York City is dead forever,” Levine and Clemons built a comedy show as a counterpoint to Altucher and others who doubted that New York City would during the pandemic. Over a year later, Altucher’s opinion has been relegated to a cold, and NYC is Dead is alive and well.

The show was hosted weekly in Central Park June of 2020 to October of 2021, and moved this month downtown to Arlene’s Grocery, a rock venue and former bodega on Stanton Street in the Lower East Side. Clemons, a news commentator for Buzzfeed News, and Levine, a jack-of-all trades writer/video producer with Amazon Video Cheddar and Elite Daily on his CV, have relied on comedy as a creative outlet to complement work.

The return to formal stages was a long time coming for Levine (33) and Clemons (28), who were among a small group of comics who never left the city during Covid. Before their triumphant return to the stage at Arlene’s Grocery, they endured zoom shows and drive-in shows where laughs were replaced by audience members flashing their brights.

“Ashkenazi food sucks because the only spice we use is the tears of our ancestors.” Eitan Levine

At the drive-in shows Levine says, “you really found out what was funny and not funny. Laughs can be a little misleading because they are loud. If you have a couple loud laughers, they can overtake everyone else.” Staring into the sea of cars, a comic could count the laughs he got if he chose to do so. Still, Clemons explained, that didn’t make up for the simple fact that comedians “need human connection.”

In the early days of the pandemic, Levine and Clemons took longs walks around Brooklyn and collected unemployment checks. Clemons had a number of New York shows canceled and Levine missed out on his first national tour. The Shalom Habibi Comedy Tour, a national stand-up tour of Jewish, Arab, and Muslim comics, was set to kick off on March 18th 2020 in Des Moines, Iowa. The tour was going to be Levine’s first time making a full salary from stand-up, and instead, he found himself aimlessly walking through Brooklyn with Clemons, because there wasn’t much else to do. The two first met when Levine invited Clemons to appear on one of his shows, and during those early-Covid walks, came up with the idea of crafting an in-person show together.

On the surface, Levine and Clemons are an odd pair. While they both discuss their histories,

Levine taps into his Jewish heritage and Clemons reflects on, among other things, his past life “as a hoe.” Clemons is clean cut, and dresses like someone in the audience might be his next date; Levine regularly wears a Reptar hoodie that would have been chic when he was regularly attending bar mitzvahs. Still, Clemons says the two “just make it work.” Since mid-summer they have not been writing jokes together for their joint hosting, improvising instead, often tiptoeing around the fact that neither of them could make the jokes THAT the other delivers.

“I can’t have that pasta, it makes my knee hot.” ­­– Natasha Vaynblat

Searching for a venue for outdoor pandemic shows, Levine and Clemons settled on the Upper West Side and Central Park, at the 100th street entrance. Central Park was BOTH a perfect space and a horrible space to host a comedy show for the exact same reason: the open air. Laughs trail off into the ether the same way Covid does, and NYC is Dead needed to find ways to increase its physical presence in the show.

To replicate the feel of a comedy club, NYC is Dead moved from daytime to dusk, and jury-rigged spotlights to remind the audience that the comics were worth paying attention to. For Levine, the moment when they added spotlights was “when is felt a little bit more legit.” On top of the physical challenges the park presented, there were logistical challenges as well.

Right before the last NYC is Dead in Central Park on October 9th, Levine remarked that “the police approached, which usually does not happen.” The organizers never bothered to get a permit to perform in the park, which fit the mood, but was undoubtably complicated. They chose the exact spot where they performed, right inside the entrance off 100th street, both for ease of schlepping and to avoid getting into legal trouble. They also couldn’t charge money for a show in the park, so NYC is Dead in Central Park was free, with many hopeful requests for donation via Venmo or in cash in a box labeled “DeBlasio Retirement Fund.” (Early in the show’s run the donations box used to say “Cuomo slush fund” but that didn’t age well, so they changed it.) By the final months in Central Park, they made enough money to pay $10-20 to all the comics who performed each week and they did not have a single legal issue.

“Before the pandemic I was a hoe. Now, I’m an ethical slut.” ­­– Drexton Clemons 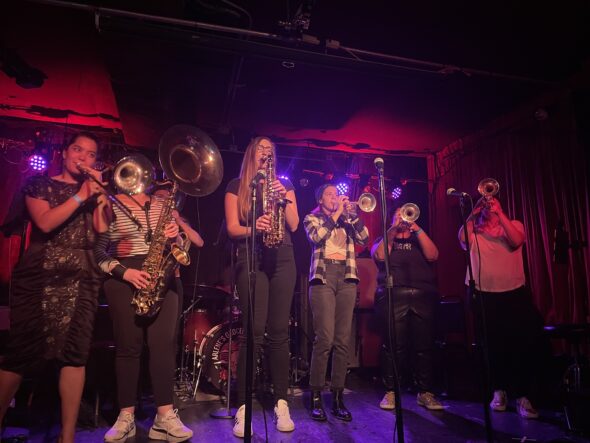 The show’s early success garnered attention in the comedy world, and when Embassy Row optioned the show into a podcast, Levine and Clemons were introduced to the Brass Queens, an eight piece all-female New Orleans-style brass band based in Brooklyn. Adding that entertainment to the show, according to Clemons, really put the show over the top. “They added such a warm energy and such a legitimacy to what we were doing in the park.” For Ally Chapel, a Saxophonist in Brass Queens, the group’s physical presence really meshed with what Levine and Clemons were doing. “We are very engaging with each other … and I think that translates really well to this comedy show where the band is very integrated in the show.”

Trumpeter and band leader Alex Harris adds, “we’re this weird sisterhood internally like sorority vibes.“ Though they have played major gigs before, including the 2021 Met Gala, the looseness of NYC is Dead gave them A space to try new things, musical improvisation that fits both the show and their sisterhood. Harris feels strongly that the Brass Queens “were more than just a band they hired,” and they matched that energy, playing off the comics, writing a protest chant for Clemons and Levine, and truly integrating themselves into the show. With a refined DIY stage and a house band, NYC is Dead was a serious show, and a write-up in Timeout New York in February 2021 brought more legitimacy, and bigger crowds.

“Were any of you around when we got into a fight with Shakespeare at the Park? Tuba Heather hit a guy with her Tuba!” – Levine

But legitimacy is only so much of what NYC is Dead is about. Ari Schaffel, a guest at the October 9th show, said his favorite part was when Clemons asked an off-duty journalist in the crowd to write an article about the show. The fact that the journalist covers sports, and another journalist in the crowd was in fact writing about the show only made the ask that much funnier. Without a true stage, Levine and Clemons have been free to blur the line between audience and performers, freedom that both were all too happy to take advantage of, and that one special audience member was too.

At their Arlene’s Grocery debut, NYC is Dead celebrated the Central-Park era of the show’s existence, and Levine and Clemons lasted all of two minutes before diving into the story of how NYC is Dead was hijacked by a child – a story that by that point The Brass Queens and other return guests had heard at least half a dozen times.

“We have a Bluetooth speaker…” Clemons began. Though Levine and Clemons were proud of their corded microphones and amp, most amps have Bluetooth built in. Usually if you’re not using the Bluetooth, you turn it off, but NYC is Dead is anything but usual. Levine took it from there: “This comic, Jeff Wright, he’s one of the writers for Seth Meyers, so he’s on stage, and noises start coming out of the amp. We don’t know what the noise is.” After Wright finished his set, one of Levine and Clemons asked the crowd if they knew what the sound was, and a biker said it was him. Despite NYC is Dead’s contentious relationship with bikers ¬– noisy bikers were NYC is Dead’s 5th biggest rival in the park, after Shakespeare in the Park, Van Gogh the Experience, Shen Yun, and Barking Dogs – they invited him on stage.

More animated now, Levine explained that the biker was lying to them. The true culprit was his eleven-year-old son, who waltzed up to the staged and showed “how he linked his phone to our amp and played the Russian national anthem!” Why the Russian national anthem? “He said it’s the most annoying song.” In their fifteen-month residency in Central Park, NYC is Dead invited onstage many members of the house band to tell jokes, along with bikers, and even one passing elderly woman who wanted to learn about ayahuasca.

We were lying in the grass during tick season and forgot about regular sick! We were thinking about pandemic stuff and we forgot about Lyme disease!” – Stephen Campbell

The audience at the first show at Arlene’s Grocery consisted of almost entirely new people – you could count on one hand the number of audience members who cheered when asked if they had seen the show in the park. Clemons and Levine are hopeful that some, if not all, of their Upper West Side fans will eventually make their way downtown to see the show in its new home.

A year and a half after Covid hit, Levine and Clemons are working again, happy that their pandemic project has grown into something lasting. Every bit of the show’s story serves as proof that New York City is alive and well. Where else would a comedy show beef with Shakespeare in the Park? Where else would a child feel empowered to hack said comedy show? Where else would these moments of insanity be a source of pride rather than annoyance. New York City is alive, and as bizarre as ever, which will give Levine and Clemons plenty of material to continue NYC is Dead as long as they care to.