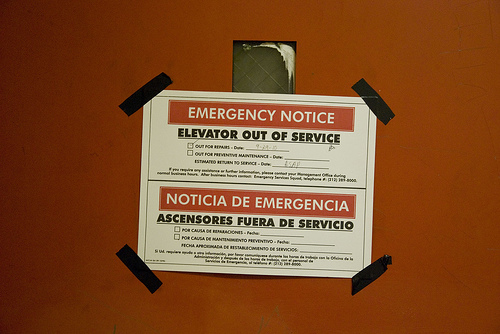 An out-of-service elevator sign is displayed in Wald Houses. ( Photo by Rachel Wise)

David Ortega, 27, lives on the 4th floor of the Wald housing projects on Avenue D. He is confined to a wheelchair. Last year, when his building’s elevator was out of service for a week, Mr. Ortega said he could not leave his home.

“I was stuck inside my apartment,” Mr. Ortega said. “I missed doctors’ appointments. I was just trapped.”

A three-month LEV investigation – including a search of hundreds of city buildings department and environmental violations – shows Mr. Ortega is not alone in his experience with malfunctioning elevators in East Village public housing projects.

The elevator malfunctions often hit the project’s most vulnerable residents – specifically the elderly and infirm – the hardest, limiting their ability to shop, keep medical appointments or socialize with others. And elderly residents complain they do not receive other basic services – like sufficient heat at night – that impact them more than other tenants.

“Some of the residents here are incredibly ill,” says Sarah Augustin, a resident of the all-senior –citizen housing development known as Meltzer. “We’re older, you know? The cold goes straight to our bones.”

More on this project in the New York Daily News, which includes video produced by Reinhard Cate

The East Village projects have been hit with more than 60 building violations over at least the last three decades for failure to maintain elevators.

Twelve of the elevator violations at East Village projects are open, meaning the Department of Buildings (DOB) has not received a certificate indicating the problems that prompted the violations have been fixed. One of these open violations is an Environmental Control Board violation, the most serious type of infraction. These types of violations are issued when problems are found that have direct, immediate impacts on residents.

More than 20 elevator violations were issued against the Housing Authority for not submitting annual elevator inspection reports. The fine for not filing these reports is $1,030.

The Housing Authority takes anywhere from two months to seven years to address elevator problems in the eight housing projects it owns in the neighborhood, records show.

“If the elevator breaks and you’re a senior citizen, you have to walk up 18, 20 stories and come down 20 stories. That is a serious risk of harm,” said Assemblyman Vito Lopez at a recent public hearing in October on Housing Authority repair issues.

Brian Clarke, deputy director of technical services at NYCHA, said at the hearing that his department takes elevator issues very seriously. “Elevators are essential services and they are a priority,” Mr. Clarke said. “We try to respond to elevator emergencies as quickly as possible.”

Mr. Clarke said NYCHA makes sure buildings with only one elevator car are fixed within about eight hours, on average. In some buildings, where there are multiple elevator cars, repairs could take longer. “With weekends, when we have a reduced staff, there could be situations where we could leave an elevator out for a few days,” Mr. Clarke said. “The building would have service, but reduced service.”

When asked to provide documentation verifying Mr. Clarke’s assertion, NYCHA Communications Officer Sheila Stainback suggested via email that the LEV file a Freedom of Information Law request to obtain the documentation. A request was filed, but no response was provided by deadline.

When asked to explain why the elevator in Mr. Ortega’s building was left unfixed for a week, Ms. Stainback said, “We will need more specific info and the person’s consent to share our findings about his personal situation.”

Yvette Quinones lives in the Riis projects, also on Avenue D. Like Mr. Ortega, Ms. Quinones uses a wheelchair to get around and, within the last year, she said her elevator has broken twice.

“The fire department had to carry me down seven flights of stairs,” Ms. Quinones said. “How can they do this to me? I’m in a wheelchair.”

Marquis Jenkins, a public housing community organizer at Good Old Lower East Side, (GOLES), a housing advocacy organization, said elevator breakdowns are a common concern amongst many of the NYCHA building tenants. He does credit NYCHA for generally being diligent about quickly fixing elevators in buildings with only one car. Mr. Jenkins said the eight-hour average repair time mentioned by Clarke seems accurate.

“This has been a huge problem,” Mr. Jenkins said. “There are elevators being shut down on a constant basis. More often then not, we ask people how often do the elevators break, and a number of them say weekly.”

Elevator malfunctions are only one issue that plague elderly and infirm residents of the East Village housing projects. Seniors also complain that there are few activities for them and that general repair issues hamper their quality of life. . “I’m so embarrassed, really, I’m embarrassed,” said Virginia Proto, a Meltzer Tower resident for 24 years. “I can’t bring my friends around here!” she said, shaking her head. “They ask me, hey Virginia why don’t you invite us over? But I can’t, I’m just really embarrassed.”

Meltzer was originally designed as a project especially for seniors. But it hasn’t worked out that way, residents say. “Just ask them,” Proto says, pointing to the group of elderly residents chatting in Meltzer’s lobby. “You’ll see, they just sit here, sit on the radiator. All day. That senior center? These flyers? There’s nothing in there! There’s nothing to do, just sit here.” She blames this on the tenant patrol and tenant president. “She’s supposed to have things going, but they claim they don’t have the funds.”

According to the New York City Housing Authority (NYCHA) website, more than 35% of NYCHA residents are over the age of 62. One of their most common complaints is about the heat – or lack thereof.

The New York City Housing Maintenance Code requires that landlords turn the heat in buildings on between the hours of 10 pm and 6 am if the temperature outside reaches below 40 degrees. Many elderly residents complain the Housing Authority routinely violates that requirement and that they freeze as a result.

The Housing Authority maintained in an email that it meets heating requirements.

But residents say no one responds when they complain about lack of heat. The Department of Housing Preservation and Development is the agency that enforces heating laws in the city. However, HPD spokesman Eric Bederman said in an email that his agency “does not have jurisdiction or the responsibility of enforcing the housing maintenance code in NYCHA properties.”

This is of little comfort to tenants who feel they don’t get enough heat. “Some of the tenants at the back of the building have an ongoing problem, getting sufficient heat. It needs to be checked out,” said Thelma Yearwood, the tenant association president for Meltzer.

Another issue is the alleged lack of help from the resident ‘Senior Advisors’, who are hired by the Authority to help senior citizens with independent living issues, and to provide aid and companionship. Two are working at Meltzer. They declined comment. “They aren’t really helping seniors. And it’s had an effect on the seniors. They don’t know where to turn,” said Yearwood.