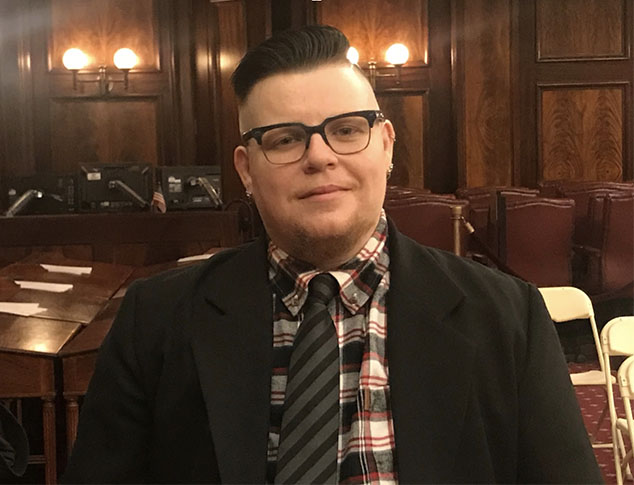 Red Washburn, 38, was one of many transgender members of the CUNY community to testify in front of the Women’s and Gender Equity Committee on November 27, 2019. Washburn said they have hope that the school system will improve its relationship with TGNC students and employees. Photo By Supe Aluko

Parisa Pena, 24,  immediately noticed the transphobic environment at Kingsborough Community College, where she first came out as transgender to her social groups.  She was so scared of what others reactions would be, so to test the waters, Pena lived her life as a gender non-conforming male.

Last month,  Pena was one of over 100 transgender, non-gender conforming and non-binary (TGNCNB) New Yorkers gathered in City Hall’s Council Chambers. Of the 51 individuals slated to testify before the Committee on Women and Gender Equity, 25 were students, staff, and faculty at  City University of New York (CUNY) schools. Each recounted negative experiences encountered as TGNCNB students, staff, and their allies. Complaints included consistently being misgendered, the lack of restroom facilities inclusive to those of all gender expressions, physical and emotional violence, workplace discrimination, and much more.

The oversight hearing, spearheaded by Helen Rosenthal, District 6 Council member and chair of the Committee, allowed them to talk about their experiences living as TGNCNB people.

Despite the passage of anti-discrimination laws such as the Gender Expression Non-Discrimination Act (GENDA), this year, many needs of TGNCNB community, which hovers around 0.6% of all 798,00 adults living in New York, were still being overlooked.

“It became obvious as a city council body, we have an opportunity to have a hearing and ask the administration, ‘What is going on? What are you working on to address the needs of this community?’ she said.  One of those organizations was CUNY and many of their students weren’t going to go unheard any longer.

For Pena, who identifies as a Latinx,  non-binary, transgender woman, it took a few years of being at Kingsborough  Community College before she was comfortable to tell her truth about being a transgender woman. When she did, she, like 78 percent of TGNCNB youth nationwide became a victim of harassment from students and even staff members at the school.

“At times at Kingsborough, I was often sexualized and demoralized for being a transgender woman,” she said.“Students talked about me in the hallways, took pictures of me leaving the bathroom and spread rumors to the student population. Professors refused to use my pronouns,  defaming my gender identity. The student board committee didn’t do anything to protect me. The school just let me know that the student would be talked to and nothing else.”

Shortly after the picture taking incident, Pena’s most upsetting moment came when school officials essentially did what the student did, and took a picture of her without consent, plastering her picture on promotional material for transgender inclusitivity in the school community. The material was circulated around the school, officially outing Pena as transgender to the entire student body. Being outed,  whether done maliciously or not, can lead to harmful, and sometimes fatal consequences. LGBTQ youth contemplate suicide almost three times the rate that their heterosexual counterparts do and are almost five times as likely to have made a suicide attempt compared to heterosexual youth, according to the Trevor Project.

For transgender youth, according to  the 2015 National Center for Transgender Equality survey, 40% of transgender adults within the age range of 10-34, reported making a suicide attempt in their lifetime, and for 92% of them, their attempt occured before they turned 25.

Pena transferred to John Jay College of Criminal Justice, where she is now a senior. While she still faces the occasional microaggression, John Jay has been a safer environment.  But for others like Red Washburn, 38, simply packing up and leaving Kingsborough wasn’t an option.

Washburn, an Associate Professor of English and Director of the Women’s and Gender Studies at Kingsborough, made headlines when they penned a June 2019 op-ed in the Daily News about the abuse they received from the school’s administration after coming out.

The trouble began when Washburn, who identifies as transgender, non-conforming and nonbinary, came out as transgender to their department in 2017, announcing that they were requesting a name and pronoun change, as well as the fact that they were having male chest reconstruction surgery. Within six months of that announcement, Kingsborough informed Washburn, who has been at the college for six years, that the Women and Gender Studies (WSG) program, was getting defunded. They believe it was because they came out.

“I think that is how most interdisciplinary programs are at public universities. It’s hard for people to understand what they are,” Waychoff said.

Despite not having a budget, full-time professors, or even a physical space for the program, Waychoff is remaining positive about its future.

“It’s consistently growing and students are taking the intro class because we have it as general education offering now, she said. “There’s a lot of verbal support for the program and I think that people are generally glad it’s there. There’s just not a lot of tangible support.”

Despite their negative experiences, Waychoff, Washburn and many others have hope that after the hearing, there will be better experiences for the queer  community within the CUNY school system.

“I was really moved and inspired by the testimonies that were shared today, said Washburn.

I know it takes a lot of courage to tell your story and speak your truth, but they gave me a lot of hope that things will change across CUNY.”

For Waychoff, change will only happen if there is continuous and consistent effort on all sides.

“Find your allies and work together,” Waychoff said. “Get on every committee that you can and bring this up at every meeting.”