Dealt many blows, one woman fights on

Carolina Quinones Scott is all smiles as she displays her collection of giraffe figurines in her apartment on Tompkins Avenue in Bedford-Stuyvesant, Brooklyn. A single mother of four, Scott has endured many obstacles in her life but chooses to focus on the positives. Photo by Viviana Gonzalez

Carolina Quinones Scott, a single mother of four, stood in the ninth-floor lobby of her public housing apartment building in Bedford-Stuyvesant, Brooklyn, and described her neighbors — the family next door is often too loud, and the smell of marijuana wafts over from an apartment down the hall, she said.

Scott, 46, lives in an apartment decorated in earth tones with a breathtaking view of the Manhattan skyline and the Brooklyn Bridge.

But sitting in her apartment at night, there have been many times Scott has heard gunshots. In August, Andre Young, 28, who lived on the 10th floor, was shot and killed one afternoon.

What makes Quinones a paradox in a hostile environment is her warm, genuine smile and hospitality, conjured up despite all the adversity she has had to overcome in her life.

Scott endured much pain over the years — the loss of her mother when she was a teenager; a separation from an unfaithful husband; remarriage and the death of her new husband less than a year later; and a diagnosis of a mental disorder.

But Scott said she is grateful for her faith and loving support from family and friends, and chooses to focus on the positive things in life.

Born in Brownsville, Brooklyn, to a large Catholic, Puerto Rican family, Scott was the youngest of five children. She said she has fond memories of her childhood.

“I remember in the summertime when it used to be too hot to be in the apartment, families used to sit outside until 3 in the morning on the weekends with their children, and it was very family-oriented,” she said.

But all that changed when she was 16. Scott stayed in Puerto Rico for the summer and her mother went along. It was the first time her mother had visited the island in a long time. As her mother was helping Scott’s uncle move a stove, she sprained her back.

When they returned to New York, Scott’s mother visited the doctor, who suspected lung cancer. Scott’s mother got a biopsy of her lung, but there were complications. Shortly afterward, she went into a coma. She died 13 days later.

“I always said that if my mother (had) still been alive, that my life would’ve been different,” she said. 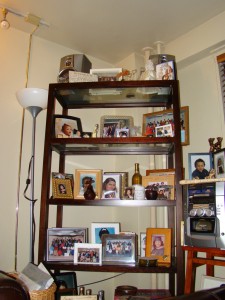 The corner of Carolina Quinones Scott's living room reflects the priorities in her life: faith, family, friends and music. Photo by Viviana Gonzalez

That same year, Scott met her first husband, Robert, the father of her four children. She applied for low-income housing and was accepted to live in the Tompkins Houses in Bedford-Stuyvesant, where she raised her three daughters and a son.

Shortly after their son was born, her husband left the family, leaving Scott to raise four children alone. She discovered her husband had cheated on her, leading to her hospitalization in a psychiatric ward for 30 days.

“For two weeks of my life, I don’t remember much. I just had such anger and such rage,” she said. “It was very difficult, but I guess it was necessary. I learned a lot. I wasn’t well.”

“If it wasn’t for my relationship with God, my kids would be in foster care, I would be in prison, and my husband would be dead,” she said. “That’s the reality. That’s exactly what would’ve happened.”

For Scott, living in Bedford-Stuyvesant has its ups and downs. She likes that she lives in a low-income, spacious, quality-made apartment. She also likes the close proximity to hospitals, shopping centers, public transportation and the Kingdom Hall of Jehovah’s Witnesses.

What Scott doesn’t like about Bedford-Stuyvesant is the crime.

“There’s always some people that you know that makes everybody look at (Bedford-Stuyvesant) like, ‘Oh, that’s a bad neighborhood,’ ” Williams said. “It’s always those who make it look bad when it really isn’t. I mean it could change, but people got to change themselves.”

But Scott has no other choice but to stay.

“I put up with it and I deal with it because it’s all that I can afford right now,” she said. “I can’t afford to go and leave where I live to move to a private person’s home and pay $1,000 rent, and then if I lose my job or get sick again, the landlord is not going to want to hear that.”

Five years after divorcing her first husband, Scott married her second husband, Lorenzo. In the same year, tragedy struck when Lorenzo complained about pain in his leg while he was playing basketball, caused by a blood-clotting disorder. Although his leg was amputated in January 1995, a blood clot reached his lungs and he had a pulmonary embolism and died on Oct. 2, 1995. His death was very difficult for Scott and her children.

Scott experienced her second hospitalization after Lorenzo’s death. In 2000, Scott was diagnosed with bipolar disorder, a serious mental illness characterized by extreme highs and lows. Scott has been able to manage bipolar disorder now that she knows what she has.

Scott was on disability for one year until recently; she now works with the Department of Education, a five-minute drive from home.

Scott credits her faith, family, friends and music for keeping her positive.

“There have been some bumps and a few hiccups along the way, but they’ve made me stronger.”