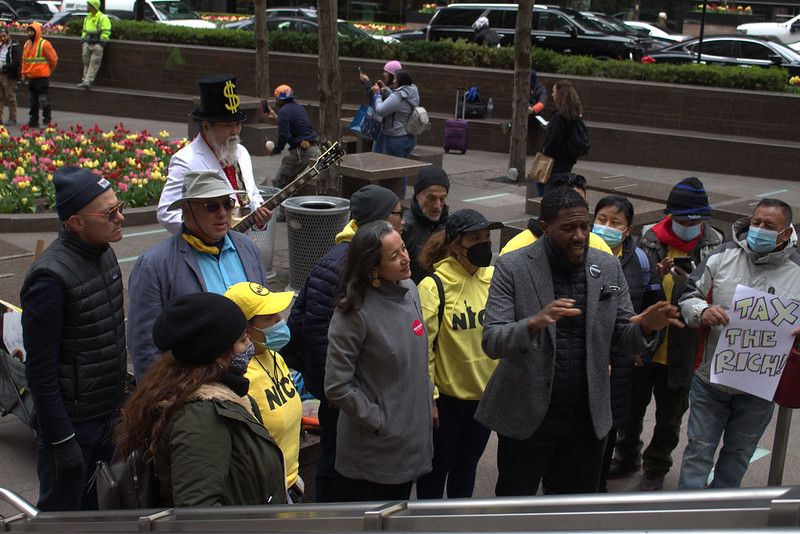 NYC Public Advocate Jumaane Williams, who is running for governor, rallies supporters to ‘tax the rich’ on Tax Day in the Financial District. Photo by Frank Festa

On a chilly Monday afternoon, New York City Public Advocate Jumaane Williams used Tax Day as a platform to call on the country’s wealthiest citizens to pay their fair share in taxes. Williams, who is running for governor this upcoming November, delivered remarks at Zuccotti Park in the Financial District of Lower Manhattan.

Standing alongside running mate for lieutenant governor Ana Maria Archila and advocates, he led supporters in a recurring chant to ‘tax the rich.’

The wealthy are getting more wealthy and those struggling are struggling even more. It’s not by accident, it’s by design. @JumaaneWilliams speaks on the importance of the wealthy paying their fair share this #TaxDay pic.twitter.com/EUirMEQRWe

In the two years since the Covid-19 pandemic began, billionaires in the United States grew 57% richer, adding $1.7 trillion to their worth, according to the policy advocacy group Americans for Tax Fairness. This accumulation of wealth has contributed to a growing chorus of politicians and citizens calling for some form of wealth tax, including President Joe Biden. Part of his 2023 federal budget released this past March included a federal wealth tax proposal, which Biden claimed could reduce that years’ budget deficit by $360 billion.

On April 7, the current New York governor and lawmakers reached an agreement on a $220 billion budget for the state. Touted as ‘historic’ for an array of bolstered investments in key areas such as healthcare, housing tax breaks, and education, the budget is underscored by her kept promise of no new taxes on the state’s wealthiest residents – a missed opportunity, according to Williams.

“They (regular New Yorkers) are suffering because we have a budget by this governor who would rather give nearly a billion dollars to the Buffalo Bills,” said Williams, citing the $1.4 billion deal for the football teams’ new stadium – $850 million of which will use state and local funds. “This is not about yelling at people for being successful; this is about asking people to pay their fair share, to make a New York for the many, not for the few.”

“We’re recovering from a pandemic, everybody’s paying their fair share, and the rich are not, which is just extremely unfair,” said Tecaxco. 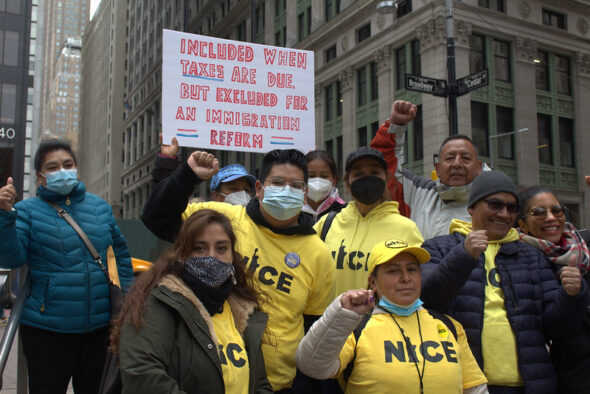 He’s emboldened in his work by previous success advocating for the excluded workers fund, which allocated $2.1 billion last year in aid for undocumented immigrant workers in New York. Tecaxco believes momentum is on their side, and recent data would suggest that he’s right – a memo released this morning by the progressive think tank Data for Progress cited polling that showed two-thirds of likely voters overall and more than half of Republicans think the wealthiest Americans are not presently paying enough in taxes.

Some of the nations’ richest are beginning to agree as well, such as Morris Pearl, who is chairman of the board of Patriotic Millionaires, a group of millionaires and billionaires advocating for more equitable tax policy. Among a constellation of policies the group champions, Pearl believes a higher capital gains tax on investment earnings is one of the most achievable policies in circulation.

“The simplest reason (that this is a priority) is that investors have lower tax rates by law than working people. You know, if you make $100,000, you’ll be paying a couple of grand a month in taxes. If I make $100,000 selling investments, I pay zero,” said Pearl.

According to a CNBC survey, almost half of the millionaires polled would support a higher capital gains tax and more than half support some sort of wealth tax on those worth $10 million or more.

“We need to have rich investors like me pay at least the same tax rates as people who work for a living, not the far lower tax rates that are currently the case,” said Pearl.