Derek Chauvin convicted of murder in the death of George Floyd 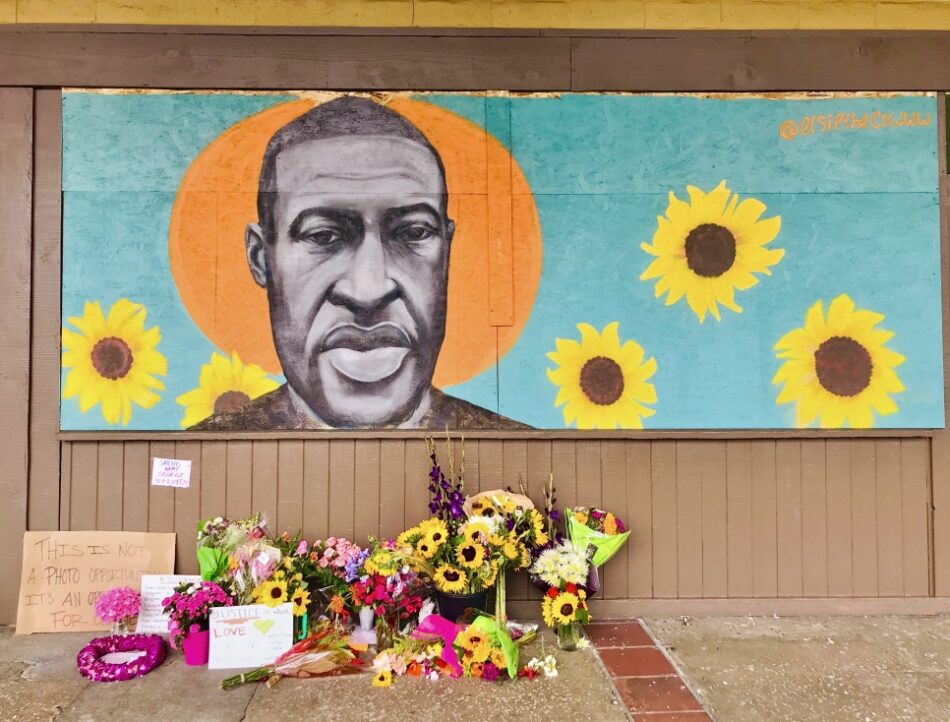 Memorial for George Floyd in La Mesa, California. Photo by @TonyTheTigersSon via Twenty20

After  a gut wrenching trial and 10 hours of deliberations,  former Minneapolis police officer Derek Chauvin, 45, was found guilty of murdering George Floyd, who he arrested for allegedly passing a fake $20 bill. Chauvin kneeled on Floyd’s neck for over nine minutes as Floyd cried that he could not breathe igniting social justice protests around the world

Chauvin was charged with second and third degree murder, and second-degree manslaughter. He was found guilty on all counts  and faces up to 40 years in prison. Sentencing is scheduled  in eight weeks.

Tears of celebration at George Floyd Square as the verdict on Derek Chauvin was read, guilty on all charges. #GeorgeFloyd pic.twitter.com/IDMdjfbMvD

Ms. L, a COTA bus driver in Columbus, Ohio, reacts after hearing the guilty charges for Derek Chauvin. Ms. L was listening to the verdict on her phone and pulled the bus over on North High Street when she heard.

The verdict comes one day after lawyers on both sides delivered their final closing arguments, which was the zenith of three weeks and over 45 witness testimonies. Thirty-eight  from the prosecution side and seven from the defense. Among the 38 witnesses was the young woman who used her cell phone’s camera to document the now-viral video of Chauvin kneeling on Floyd’s neck, and keeping his knee on his neck even after the paramedics found a pulse-less Floyd laying lifeless on the ground.

History should remember the incredibly 17 year old Darnella Frazier who had the strength and composure to capture the murder of #georgefloyd on video. Without her video there may never have been #justice.

Chauvin’s encounter with Floyd ignited a wave of protests across the country that triggered racial discord and conversations regarding defunding the police and enforcing police reform. During the  duration of the trial,  heavy security and barricades were placed outside the courthouse in expectation of civil unrest and protests resulting from the verdict.

The trial of officer #DerekChauvin into the murder of #GeorgeFloyd last year starts on 8th march In #Minneapolis court house heres a video clip of all the barracades they’ve put up hit link https://t.co/GUQKDeHjXU#BLM #DerekChauvinTrial #GUILTY pic.twitter.com/sU0vT9DAco

During the trial, Chauvin’s lawyer Eric Nelson honed in on three arguments: Floyd died as a result of the drug overdose Fentanyl and heart disease; the crowd that gathered around the scene distracted Chauvin and caused him to lose his composure and that Chauvin was within his rights of using his police academy training to restrain Floyd. But the jury was not swayed.

New York congressman Jamaal Bowman tweeted that the verdict does not solve the racism that plagues policing.

We’ve known Chauvin was guilty since the second we saw him murder George Floyd on film — but we also know of the racism inherent in our carceral and policing systems.

This verdict doesn’t change that racism, or the work ahead needed to transform those systems to serve us.

While many are satisfied with the verdict, questions still remain of the future of policing.    On April 11,  Daunte Wright, 20, was gunned down by Minneapolis police  in what they called “an accidental discharge”. Wright was stopped because his tags’ registration had expired . He also had an outstanding arrest warrant.

This trial is meaningful, but not total. Justice remains malnourished when it comes to police use of force. There’s still work to be done.

But still, grateful for the verdict.