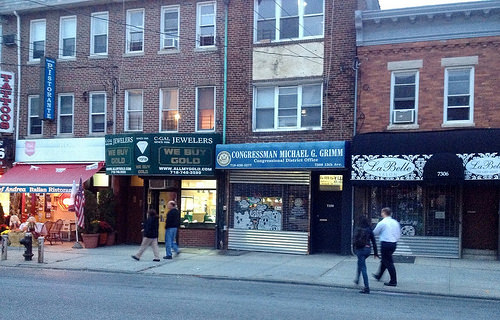 Consumer data, the catnip of credit card issuers, online advertisers and any other business that wants to find new customers, has quickly become a weapon in the toolkit of political campaigns.

President Barack Obama’s campaign staffers point to their ability to use data to target potential voters as a key factor in their 2008 and 2012 victories. In France, the technique helped sweep the Socialist Party to power and elect President François Hollande in 2012.

But harnessing big data’s power for local elections and other grassroots campaigns has proven difficult. The data available in national campaigns, which can include such minutia as a potential voter’s magazine subscriptions, is harder to sift through with a smaller staff and budget. The Republican National Committee has spent years developing its own voter targeting tools, but many of its candidates are not using them in their midterm election campaigns.

“It’s a huge challenge to filter the tools for the 50 state parties,” said voter targeting expert Justin Gargiulo. “The RNC is really not going to do that. It’s not scalable for them.”

Instead, many Republican candidates up for reelection on Nov. 4 have turned to smaller startups like VoterTrove, which Gargiulo founded in Austin in 2012. Its clients include Sen. Thad Cochrane of Mississippi, Sen. John Cornyn of Texas and Rep. Michael Grimm of New York.

“The challenge is having a system that keeps it all in one place,” said Garguilo. Moss local campaign staffers won’t use voter data unless they can quickly access and easily understand it, he said.

Solving these problems is what has voter targeting pioneers excited. At a conference in October at New York University, several strategists sat down to explain why they believe that, despite its current challenges, data-driven campaigns will become the future of politics in the U.S. and abroad.

Anne Filipic, who directed Obama’s Iowa field campaign in the 2008 presidential elections, described that race as one of the early successes in using data to target voters. “When we started in Iowa, nobody knew who [Obama] was,” Filipic said at the conference. “The political pundits all assumed he had no chance.”

Realizing that the campaign was fighting a losing battle, Filipic’s team hitched the data and analytics that the private sector uses to target consumers to tried-and-true grassroots campaigning. Obama supporters were soon knocking on doors whose owners were more likely to listen and to vote. “We had, in some ways, revolutionized electoral campaigns,” Filipic said.

The Obama campaign’s success in harnessing big data to get out the vote inspired two Harvard Business School students, Guillaume Liegey and Vincent Pons. They brought political targeting back to their native France, where they designed and implemented a voter mobilization project for the French Socialist Party. It got the party leaders’ attention and landed their firm a job running François Hollande’s successful 2012 presidential campaign.

“We did not invent door-to-door,” Liegey said at the conference. “What we tried to do was scale it using data and scientific experiments. You use data to know where you’re going to find the voter, and then you use science to find out the most effective technique to change their behavior to what you want.”

Eighty percent of the campaigners had never knocked on doors before, so Liegey and Pons told them to do three things: introduce themselves, listen to the voters’ concerns, and share a personal story about why they decided to get involved in politics.

“It’s very hard to get a French Socialist to listen,” Liegey said, but in the end the strategy worked just as well as it had in Iowa in 2008.

After the presidential campaigns in France and the U.S., targeting pioneers were eager to branch out from the election cycle and turn their data prowess to political challenges. In 2013, Filipic became president of Enroll America, a non-profit that helps Americans enroll in health coverage made available through the Affordable Care Act. She quickly realized the challenges of using data to find the uninsured.

“What struck me was the enormity of the task,” she said at the conference. “At least on an electoral campaign, you have a voter file that you can use to track folks down who are registered to vote. There’s no magical list of the uninsured.”

Overcoming skepticism was another problem. Once they identified the uninsured, Filipic’s staff found that the best way to convince them to enroll was through family members or community leaders, something other non-profits were already doing. Enroll America reduced its staff and forged partnerships with other advocacy groups, but Filipic still sees potential in her approach.

“We recognize that we were never going to be as big as the Obama campaign,” she said. “We were able to engage over five million consumers in this first enrollment period, but we’re just beginning.”

For Donald Green, a professor of political science at Columbia University who also spoke at the conference, the problem is not necessarily the data itself, but how campaigns use it. As targeting and other tools make it easier for Republicans and Democrats to find and mobilize their supporters, the parties are more likely to ignore people who don’t hold strong political convictions.

“They’ve focused their attention on getting a bigger army of their supporters to the battlefield,” he said. “They’ve been able to play increasingly to their activists and their extreme funders, which is why the polarization of American politics has been accentuated by the advent of mobilization-oriented campaigns.”

“We are not yet at the stage where science is determining all the aspects of the campaign,” he told the conference attendees. “But to some extent science has taken power, and the answer to the question of should we regret it is going to be a resounding ‘no.’”