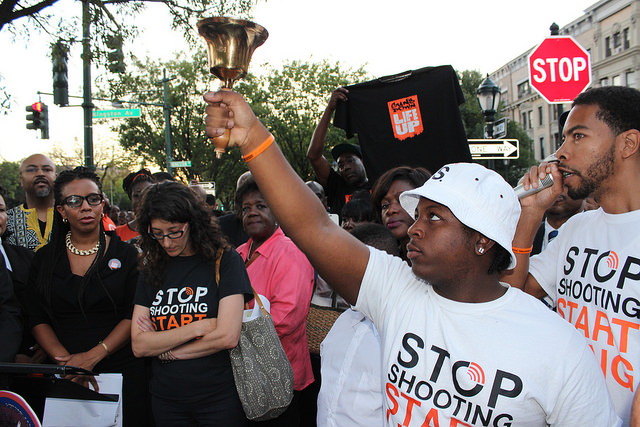 A member of the Save Our Streets organization rings the bell for each of the victims who died due to gun violence in Brooklyn. Photo by Taisha Henry.

Dozens of people gathered in Crown Heights, Brooklyn and chanted “I watch your son, you watch mine.” “Enough is enough.” They held signs that read, “Youth Matter, Black Lives Matter.”

They rallied, they marched, they held vigil  yesterday in memory of Carey Gabay and the 94 Brooklyn victims of gun violence. Carey Gamble served as an attorney in Governor Cuomo’s administration, and was killed by a stray bullet during a West Indian Day celebration on Sept. 17th.

Marcher, Devine Alexander of St. Albans, Queens, is a member of Guns Down Life Up (GDLU), an organization that works to dissuade youth from turning to guns. Alexander, who was once an inner city kid himself, understands it can be hard to escape violence. He believes there are better ways to cope with the struggle inner city kids may face. His group provides mentoring and an outlet for kids to have someone to talk to. 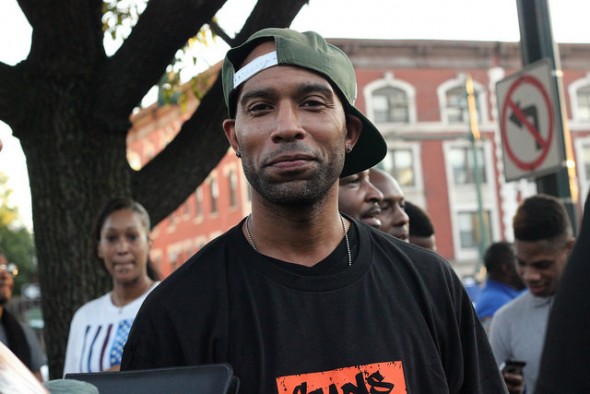 Devine Alexander is a member of Guns Down Life Up (GDLU) an organization that aims to dissuade youth from a gun-violent lifestyle. Crown Heights, Brooklyn. photo by Taisha Henry.

“There’s a lot of unsaid reasons why kids go the way they go, maybe not being financially secure, not having a place to live, or just no no one to talk to, “Alexander said. “So we’re here just to set an example that you can change your life and be a prime citizen of society”.

Alexander believes that his organization and others like it, provide action and change in the community. He said he has seen kids in his organization move away from a violent lifestyle and lead others to do the same.

“We’re trying to start a mindset when they’re very young to educate them, that guns do kill people and guns are dangerous,” he said.

Councilwoman Laurie Cumbo, one of the officials who led the rally, believes that boroughs should have an office dedicated to gun violence with responders who come within 72 hours of a gun-violence incident.

As of June, 72% of New York City’s murder victims were killed by guns, a 15% increase from last year, according to a New York Daily news article.

And according to NYPD’s weekly crime statistics, between September 7 and September 13 there have been 33 incidents of gun violence in Brooklyn, and 51 incidents city wide.

Cumbo is also working to gain funding for Operation SNUG, a project funded and implemented by the New York State Division of Criminal Justice Services, which aims to end gun-violence. 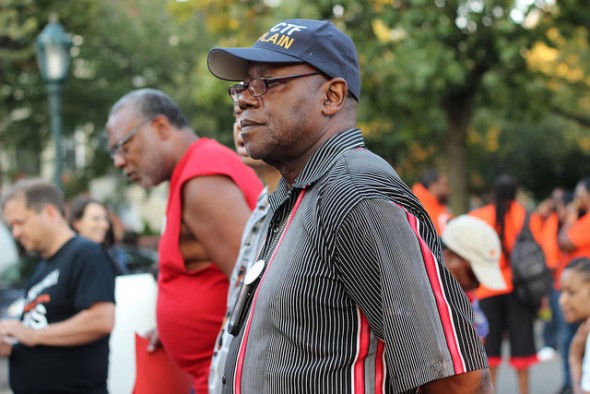 Febe Kennedy who marched with Dr.Martin Luther King believes that the youth need to learn respect and love before any real change can happen. Photo by Taisha Henry

Feber Kennedy, a Coney Island resident, who attended the rally said, that the most important thing that young people need to learn is to respect and love one another.

“I’m one of the old folks, I remember marching with Dr. King,” he said. “We had love back then and I think the love needs to continue up here.”