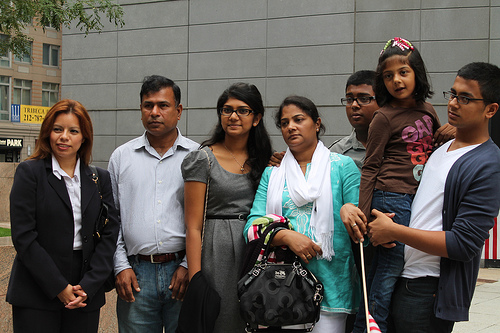 Nadia Habib, (center) a 19 year-old student at Stony Brook University, poses with her family and lawyer outside Federal Plaza before she goes in hear the decision made on whether or not she and her mother will be deported to Bangladesh. Photo by Katherine White

Nadia Habib, an undocumented immigrant, looked up at the dominating skyscraper at 26 Federal Plaza before she walked in for a deportation hearing. She held on tightly to her baby sister in one hand and dragged a small, 50-pound suitcase in another.

Habib, 19, was with her family for a hearing today, which would let her know whether or not she and her mother, Nazmin, would be deported to Bangladesh. The suitcase held all she was allowed to take if deported.

Habib came to America when she was only a year old. She is a psychology student at Stony Brook University, and wants to be a drug researcher. She has three younger siblings who are American citizens. Her dad holds a green card, but her mom is also undocumented.

She is what is know as a “Dream Act kid”, whose path to citizenship has been derailed with the failure of The Dream Act, a bill that would have given undocumented children that right to remain in the only country they know.

But today, Habib got a break. Immigration and Customs Enforcement postponed the case. A new hearing date has not been set.

Habib and her mom had a lot of support from family, friends, the entire Bengali community from Queens and the student led New York State Youth Leadership Council.

“They’re not criminals,” said Tania Mattos, an undocumented student from Bolivia and a member of NYSLC along with Nadia. “They’re heroes. We stand in solidarity with her. They don’t deserve to go through this nightmare. No one does.”

The crowd gathered outside the Federal Plaza in support of Nadia drew not only camera crews and police officers, but even political heavyweights such as State Assemblyman Peter Rivera and Councilman and former Chair of the Higher Education Committee, Ydanis Rodriguez.

After saying a few words, Rivera pushed his Chief of Staff Danny Figueroa to step up. As Figueroa spoke to the heated crowds, he argued for change in the media’s perception of immigrants.

Although the younger supporters among the crowd offered the loudest roars of support, there were also older friends and community leaders who quietly stood in solidarity with Habib and her mom.

Alauddin Ahmed, a 55-year-old businessman from Queens, is a Bengali immigrant himself who came to America in 1956. He started out driving taxis, but these days he runs his own daily shop. Ahmed found the immigration process to be a hard road, but he knew it was all worth it the day he watched his daughter graduate from medical school.

“I realize how they’re feeling,” he said. “Their family should be considered, there should be adjustments. I feel very sad for her because my own daughter was in university and it makes me feel for her. People who have grown up here, we should do something for them. Nadia had very big aims and now, I don’t know. We need the media and everybody to help the students.”

Kamrun Nahar, a 45-year-old woman from Queens who immigrated to America with Habib’s mom, Nazmin said she is worried about the family. “Habib doesn’t even read Bengali,” she said. “Not only does Nadia have no cultural idea of what living in Bangladesh is like, but Nazmin has been taking care of her family as a housewife for the past 19 years and the youngest child of three that she would be forced to leave behind is still only six-years-old. There are no jobs over there. “In our country, we spend all the money for our kids, we need to educate them. If you go back, life is destroyed.”