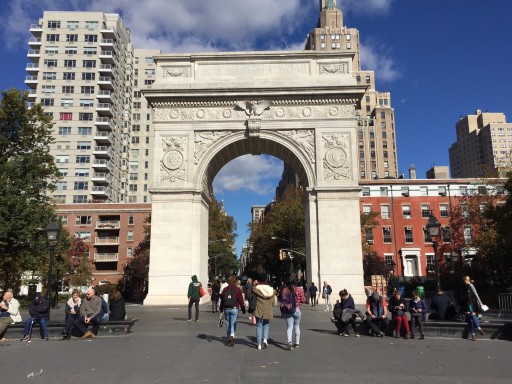 NYU has a voting plan for students. Photo by @taiatorres via Twenty20

One of the most prevalent questions circulating around newsrooms and family rooms alike over the past few months is daunting: what’s at stake this election? Twitter has been a breeding ground for endless memes and vibrant fact-checking debates as President Trump and Joe Biden try to spread their agendas to the masses. But one message in particular from the Biden, Harris campaign has rung loud and clear into the ethers: register to vote and make a voting plan. NYU students and faculty are already on it.

Although NYU has always helped students register to vote and inform them of local and federal elections, an organization called NYU Votes was established after the 2014 midterm elections as a nonpartisan push to educate and register students.

“I believe there are 19 different colleges and schools within NYU, and what we’ve done is we’ve created specific teams for all of those schools,” said Chrissy Beluk, Assistant Director of Service & Leadership at NYU. “NYU is so big that there’s not one universal message that’s really going to connect with students, so what we’ve done is created training that the school teams are able to participate in and they’ll be able to get the tools and resources of how to navigate the election and how to register in a virtual world to then make sure they’re prepared.”

She explained that NYU Votes is essentially a nonpartisan initiative to help eligible students register to vote, whether in the state of New York or requesting an absentee ballot from their home state. This year NYU Votes has about 220 volunteers who have participated in training about how to engage with peers to register. They know that students are going to better receive information about voting when it’s coming from groups they trust (resident halls, clubs, sororities and fraternities, etc.) and they’re giving those organizations the communication material to spread it effectively.

NYU Votes also created a tagging capability on its website that allows any university club or organization to link political events to the NYU Votes page. This is meant to be an additional tactic to keep students informed about political conversations. For example, on Oct. 22 Dr. Lisa Coleman, NYU’s Senior Vice President for Global Inclusion and Strategic Innovation, tagged the virtual event with Alicia Garza, one of the founders of Black Lives Matter, to talk about her new book and the political climate. Tisch School of the Arts tagged a series of documentaries touching on voter suppression and voter rights.

In terms of campaigning and registering students, this year the group was obviously forced to shift to a digital approach. NYU Votes sent out broad messaging campaigns to students listing voting registration deadlines and encouraged residents halls and various groups to push communications on a smaller scale. “We know peer to peer communication is one of the most beneficial ways that people can get ready for the election and will actually change their behavior to make sure they vote,” said Beluk.

According to NYU’s student athlete website, the women’s basketball team initiated a campaign to get every student athlete to register to vote, and did so within 48 hours. Declarations of being registered to vote swept through Instagram. “That was a really cool social media thing I saw a couple of weeks ago,” said Beluk. “And that was just something they did on their own, which is exactly what we’re hoping for.”

NYU Votes has been working with student-run political groups such as GenVote@NYU, which was founded in the spring of 2019 by Robi Lopez-Irizarry, now a third year NYU undergrad student studying Political Science and Public Policy. NYU student Hamilton Brooks is working on a peer to peer voter outreach program, Taylor Hvidsten is GenVote’s media director, and Sam Reinker helped secure the Skirball early voting location.

When the students started GenVote last year, their main goal was to try to turn election day into a school holiday so that students wouldn’t have to stress about finding time to vote between classes and schoolwork. And although they weren’t able to make that happen this year, they were able to compromise. An NYU message sent out to faculty on Oct. 14, read, “The Office of the Provost supports and would like all faculty to be aware of the Senate Executive Committee’s recommendation: that instructors accommodate students who miss class for the purpose of participating in election activities on November 3, 2020. All elections are important; seldom has one been more important than this one.”

Lopez-Irizarry and his crew at GenVote also pushed NYU to publish the National Study of Learning, Voting, and Engagement Report, which is essentially a study done by Tufts University that shows data about each university’s election statistics: how many people are voting, what is the demographic, where are they registered, etc. The study’s purpose is to increase the civic engagement among students in the coming elections.

Christopher Echeveria, the Assistant Director of Government Affairs at NYU, said that the university has always had polling places on campus for every election, be it national, state, or NYU’s specific district, but this is the first year the campus has an early voting site.

“A couple months ago, we got approached by a group of students who said they really wanted to see an early voting site at NYU,” said Christopher. Around the same time that GenVote was pressing the Government Affairs office for early voting sites, they heard from The Board of Elections that they were losing early voting sites due to shutdowns at senior centers and local schools refusing to allow members of the public in. “They were kind of in the situation where they really needed space and students really wanted this. So we said, hey, whatever this is going to take, let’s make this happen.”

While walking around Washington Square Park, I spoke with several students about what’s at stake this election. Amber Alex, an undergraduate senior studying engineering, who is a registered voter from Texas. “I feel like everything is at stake,” said Amber. “I feel like my voice has to be heard to change what has been happening because that’s the only power I have.” She adds, “Most of what I’ve heard regarding the elections hasn’t come from NYU, except for through NYU Votes and the campaign they have going on and through the organization I’m a part of at NYU, Sigma Gamma Rho.”

Devon Speak, who is a third year in Political Studies with a concentration in Sustainability, is registered to vote in Washington State. “I’m very politically active. I have a long history of organizing and I’m also a military vet, and I’ve done a lot of not for profit. And with all that perspective, I’m aware that systemically it’s the same system that’s going to happen regardless of who wins. Joe Biden’s policies are still under the liberal, overarching system, and that seems to be the general problem. I think overwhelmingly it’s kind of going to be the same, but of course there will be some small wins that will cater to the middle class and quelling unrest if Joe Biden wins.”

Lopez-Irizarry summed up his thoughts by saying, “Regardless of what party you stand for, our democracy is at stake. We have seen, especially since Shelby County V. Holder in 2013, we’ve seen really an explosion of voter suppression laws and voter ID cards and tactics to prevent people from voting, and that’s what I personally see as being at stake in this election.”