Protesters with the group Movement for Justice in El Barrio hold signs protesting the mayor’s plan to rezone East Harlem. The plan will allow new developments to begin construction in the neighborhood. Photo by Kristen Torres.

Protesters gathered outside an East Harlem town hall meeting last night to push back against Mayor Bill De Blasio’s plan to rezone some sections of the neighborhood.

They held up signs that said things like “East Harlem is not for sale,” and “Say no to racist rezoning.”

Salome Leon was one of the protesters. She’s part of a group called Movement for Justice in El Barrio, which aims to stop gentrification in the neighborhood.

“We’re here because what De Blasio is saying is a lie,” Leon said. “He keeps saying rent won’t go up with these new developments, but they will, and we won’t be able to afford it anymore.”

Leon said she’s lived in the area for the last 19 years. She raised her children just down the street from the Johnson Community Center, where the town hall meeting took place.

“De Blasio keeps using the affordable housing mandate as an excuse for these buildings being built. But the landlords aren’t complying,” Leon said. “We want him to ditch the rezoning plan. It doesn’t help the people who live here.”

The East New York Neighborhood Plan was announced by the mayor’s office in 2015, and is meant to create 1,500 new affordable housing units in the borough, according to De Blasio.

Contrary to what Leon and her fellow protesters claim, De Blasio said the rezoning would actually help more people get out of shelters and into permanent housing.

“When this is all over, we’ll have four thousand, five thousand people into new homes,” he said.

She pushed back against the mayor at the meeting, asking why so much money was going into building new affordable housing, while the existing units were falling into disrepair.

“Public housing is the only low income housing option that we know of,” Velez said. “If we’re going to talk about preserving public housing, then we need money, too.”

Some residents also pushed De Blasio about his motives for the rezoning, claiming he was giving out development contracts to campaign contributors.

“I have spent plenty of time in the last four years taking on landlords and developers,” De Blasio said to the town hall participants. “I’ve done a lot that goes against any interest of the real estate industry. So you might disagree with me on the vision, but don’t look for a motive that isn’t there.”

De Blasio also said current affordable housing buildings will never be switched over to private companies — a concern that many Harlem locals brought up over the course of the two hours.

“East Harlem has the highest amount of affordable housing units in the country,” De Blasio said. “If we don’t keep investing in new affordable housing, though, a huge number of people won’t be able to continue living in the city.” 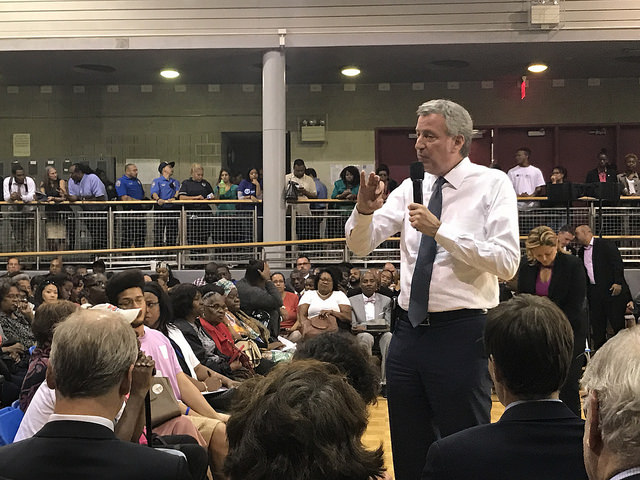 The rezoning plan says the city will rush the construction of 1,200 new public and private affordable housing units over the next two years in the neighborhood.

It rezoned certain areas of East Harlem to allow construction of mixed use buildings, meaning developers can have storefronts on the ground level, and housing units on the upper floors.

“Look, I get it. There’s a lot of bad connotation when it comes to saying anything we do is privatized,” De Blasio said. “But everyone is going to keep what they already have. We’re just taking the opportunity to develop new units.”