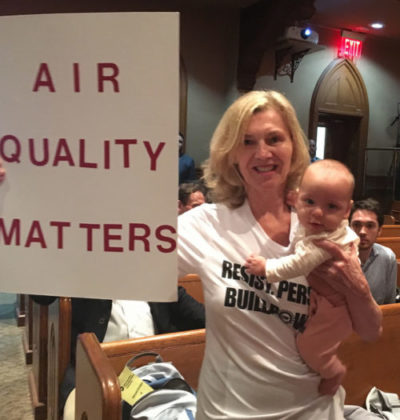 East Village resident Georgette Fleischer  spoke out at the town hall meeting for residents to discuss the L train shutdown yesterday. She said her biggest concern is that the increased traffic and associated fumes will give her daughter, Augusta, asthma. Photo by Kerry Breen.

Residents near 14th Street in the East Village are gearing up for what they fear will be more pollution then they can handle when the L train shuts down. Yesterday evening, they were able to address a panel of officials at a town hall meeting.

“I think the quality of my life will be drastically interrupted. It will be a disaster,” said Ken Ettinger, who lives on 13th Street. “If you go to 6th Avenue, north of 14th Street, when they have three buses lined up, it takes up the whole block. How do you think six buses are going to be maneuvering across a place where by definition, just being there is going to bring the street to its knees?”

The L train, which carries over 400,000 riders daily, is shutting down from the Bedford Avenue station in Brooklyn to the Eighth Avenue station in Manhattan, beginning in April 2019 to repair damages in the Canarsie Tunnel, caused by Superstorm Sandy in 2012. The shutdown is expected to last 15 months. In the meantime, the MTA is increasing alternative subway, bus, and ferry services, as well as encouraging commuters to bicycle to their destination. But the increased services will unleash a fleet of buses on heavily congested 14th Street day and night, transforming it into the busiest bus route in the country.

The town hall meeting, one of more than 100 such meetings, was organized to give residents a forum to vent their concerns. Held at the Middle Collegiate Church in the East Village, over 100 people attended.

Multiple residents asked why the buses could not be more evenly diffused throughout the city.

Michele Campo, president of the Bowery Alliance of Neighbors and member of the Kenmare/Little Italy Loop Coalition, proposed a route that takes different streets, but makes several turns, instead of going in a straight line. While the route is less direct, she said it follows existing bus routes and passes by all needed subway entrances.

“This route is logical, because it doesn’t impact the much smaller, residential, and the extremely congested-at-all-times Kenmare Street,” Campo said.

She also said  that the route currently proposed by the MTA and DOT interferes with emergency service routes, and said that her organization’s proposed route uses less trafficked and less residential streets, making it “smoother all around.”

Local resident Georgette Fleischer held her four-month-old daughter in her arms as she told the panel of transportation officials how she was worried that the diesel-fueled buses could harm the health of children. Fleischer pointed out the risk to her own daughter, as well as the presence of a Headstart child-care center near the route. She wanted to know why zero-emissions buses could not be used. The majority of the 200 additional buses are diesel-powered.

“If you cared about the long-term health of our children, you would have this in place or you would do something to get it in place,” she said.

While there do not seem to be plans to reduce or change the bus routes, officials did say that air quality levels would be monitored, and expressed an interest in reducing the number of diesel-fueled buses that will be taking the route.

“I wish I had more electric buses,” said panelist Andy Byford, the Chief Executive Officer of the New York City Transit Authority, in his response to Fleischer. “We are getting as many electric buses as we can. If there was a way of getting, of just buying brand-new electric buses from somewhere, we would do that.”

According to Department of Transportation Commissioner and panelist Polly Trottenberg, 70 buses an hour will be entering the neighborhoods in three new bus routes. While residents understood the necessity of the construction to repair the tunnel, they worried about the health risk to neighborhood children.

“Remember, rush hour is very close to when school-age kids are going to school,” said Daniel Nauxe, a small business owner who lives on 11th Street and Avenue A. He said he was representing his block.

“They’re going to be walking down the streets, breathing in an excessive amount of carbon monoxide, and diesel fumes, and gas fumes,” Nauxe said. “So, this is not really well thought out.”

George Jones, who lives on 14th Street, highlighted the presence of two local high schools, as well as a 17-floor dormitory building for students at the New School, estimating that hundreds of students lived there.

“A large number of the high school students spend their out of class hours congregating at the steps of brownstone buildings, immediately opposite the school,” Jones said.

He believes the students will face danger crossing congested streets.

The panel also featured Deputy Commissioner for Transportation Planning and Management Eric Beaton and Chief of Operations Planning Peter Cafiero. Byford said that he would check in with the project manager as early as the following day, and try to make an immediate visit to 14th Street.