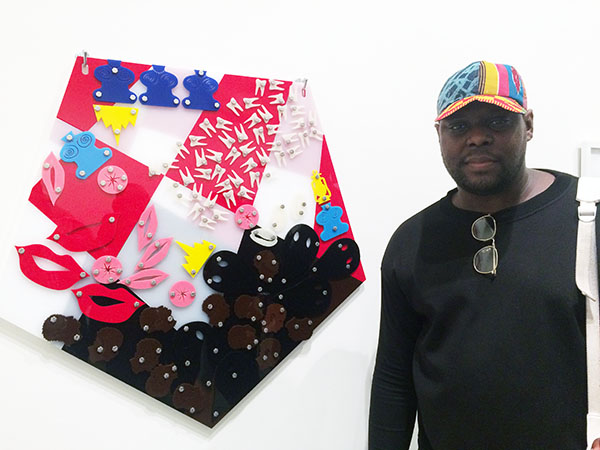 Damien Davis stands in front of his politically themed abstract sculpture, “2016” at the Joshua Liner Gallery. Photo by Alexander Gonzalez

“All of the connections to Donald Trump were kind of overwhelming,” explains Steiner, a former copyright lawyer turned artist. “Ronald Reagan was this actor who became a politician, so he came in it at the same angle as Donald Trump. … Reagan used the expression ‘Let’s Make American Great Again,’ and Trump is using the exact same motto for his campaign.”

Housed in the Chelsea-based Joshua Liner Gallery, the group show includes 27 works from 21 artists who capture the intersecting themes of politics, sexuality and celebrity through sexually explicit paintings and abstract sculptures.

Steiner’s two watercolor portraits, “Why I Want to Fuck Donald Trump” and “Why I Want to Fuck Hillary Clinton,” alluded to Ballard’s 1967 statement about “the probability of presidential figures being perceived primarily in genital terms.” Steiner depicted Clinton and Trump as a painted collage of phalluses and vaginas—a raw flesh-colored vulva replaced Trump’s signature hairdo while Clinton sported a knob-bob.

“My work is exceedingly vulgar,” Steiner said. “It is that way because I think there is this undercurrent that goes often largely ignored, and, maybe for the first time ever, has really bubbled to the surface in this campaign.”

His paintings often draw from pop culture icons, such as the Simpsons and SpongeBob, and have been exhibited in more than 20 international group shows since 2006. Throughout his body of work, he reconstructs cartoon characters using genitalia, food or household objects.

Steiner added a backdrop of election paraphernalia to his portraits of Trump and Clinton. Red and blue banners advertising past White House hopefuls, such as Mitt Romney, Ross Perot and John Kerry, clashed with the flesh tones of this year’s candidates.

Politically-themed portraits by artists Tom Sanford, Eric Yahnker and Jonathan Yeo are also on display in the exhibit. Yahnker’s “Hell Yeah!” portrays a lighter side of Hillary Clinton who sticks out a pierced tongue drawn with colored pencil on paper. In “BUSH,” Yeo captures a close-up of George W. Bush’s face composing a series of sexually charged scenes.

After viewing the show, Jenny-Rebecca Lewis, a Wall Street lawyer, said that it had helped her gain a “deeper” understanding of the candidates. She was drawn to another Steiner piece: two prints of Trump and Clinton that swapped faces when exposed to the flash of a camera. Steiner embedded retro-reflective dots, a technology that reflects light to reveal a new image masked under the one visible to the naked eye.

“The switch of the candidates allowed me to remember compassion,” said Lewis. “That it’s not one or the other. We’re all interconnected in some way.”

Steiner stressed that he did not intend to curate a “facile anti-Trump show” although 12 of the 27 works in the show directly refer to Trump. He drew on Ballard’s work to address issues with the two-party system along with the conversation about sexuality and celebrity in politics Steiner, who has consistently voted as a Libertarian, said he plans to vote for Gary Johnson.

Unlike the art works containing overt references to unexciting candidates and corrupt politics, Damien Davis wanted to offer viewers a more open-ended, “cerebral” challenge. His abstract sculpture “2016” is meant to be an unapologetic critique of American society: 50 white teeth, 13 brown and black heads and eight vagina-like shapes “float” on a red-and-white Plexiglas plane held together with stainless steel screws.

“My work is really about taking this fixed set of iconography and seeing how much content, how much information or narrative I can generate by juxtaposing elements together,” said Davis, a faculty administrator for NYU’s art department.

The 31-year-old said he wanted “2016” to tell a loose history of the United States and its relationship to slavery and colonialism. His work often focuses on currency—emotional, intellectual and sexual. He explained that the 50 teeth represent slaves whose quality on the auction block was based on their dental health.

But Davis said he did not anticipate how the current political climate would inform his sculpture. “There are vaginas in the work. … Who would’ve known that a video was going to be released of Trump grabbing people by the pussy?” Davis said about sexual assault accusations against Trump. “The most interesting thing about this show is seeing its reading and interpretation play out in this extreme way over a short fixed amount of time.”

For more information and a complete list of artists, visit joshualinergallery.com. The exhibit will be on display until Nov. 12.