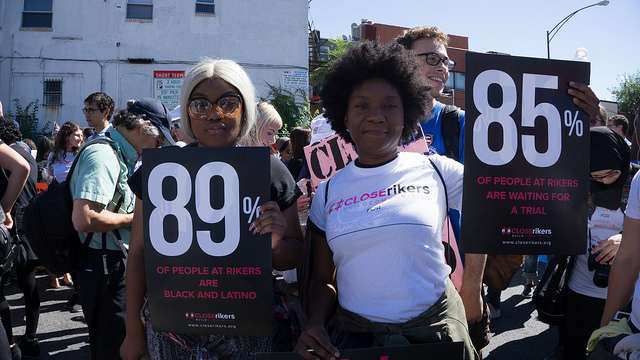 Stephon Rose, 27, (left) and Finella Jarvis, 31, (right) hold up signs with Rikers Island statistics during  a rally against the troubled prison yesterday. Photo by Sophie Herbut.

When Finella Jarvis’s brother was arrested, he was sent to Rikers Island for months to await his trial before being transferred upstate. She panicked and worried about her brother’s safety. Jarvis knew Rikers Island to be a legal cage for human beings that devolves them into desperate animals.

“It was heart-wrenching because that’s my twin,” Jarvis, 31, from Canarsie, Brooklyn said. “So just imagine going to court dates and going to appeals and just waiting for your brother to be exonerated and to be released. It takes a huge toll on the family and unfortunately our mom passed away when he was in there.”

Jarvis and hundreds of protestors gathered on Steinway Street and 30th Avenue in Astoria, Queens yesterday to urge the closing of Rikers Island. The protesters marched to Hazen Street and 19th Avenue, the edge of the bridge to Rikers Island, chanting to free their sisters, brothers and friends.

Rikers Island has been heavily criticized over claims and reports of extreme violence among inmates and correctional officers, corruption among the officers and contraband being snuck onto the island. Most recently an officer who pled guilty for covering up and helping beat an inmate to death.

Jarvis’s brother was charged with a felony weapon charge. He was released this past December on appeal.

Rikers Island has a notorious reputation. Mayor Bill de Blasio says he is trying to reform the prison. His plan includes giving some correction officers stun guns  to help decrease violence and added mental health units. Glenn Martin, the founder and president of JustLeadershipUSA, an organization dedicated to cutting prison population, said that the reforms are like “lipstick on a pig.”

Jarvis said Rikers Island is too far gone for anything to help. She said the best solution is to close it down.

“Rikers needs to be shut down because it’s just a tool that just perpetuates the demise of the black, the Latino, and every underprivileged community” Jarvis said. “No one is being rehabilitated there.”

Jarvis’s brother graduated with a degree in Africana studies from Brooklyn College and is on his way to law school. But she knows there are not the same opportunities throughout every community.

“They’re people that made mistakes,” she said. “They come from communities that are underserved, underprivileged and they don’t have some of the opportunities that our white counterparts have.”

Jarvis said there needs to be more avenues for people to rehabilitate and learn from their mistakes instead of being branded a criminal and then having less opportunities than they did before.

Walter Rodriguez, 45, from Claremont, Bronx, works in the Bronx Defenders, a public defense organization for residents in the Bronx. He said he sees clients wait years in Rikers Island for their trial in “deplorable” and “dehumanizing” conditions.

“By closing Rikers, it could help expedite justice because then we’re not warehousing people,” he said. “It’s part of a broken down criminal justice system.”

Rodriguez said that getting a court room to open in the South Bronx takes so long and therefore his clients are forced to wait in Rikers Island. He said targeting these petty crimes and having people wait so long for a trial is a “funnel for criminalizing people and then bringing them into jails.”

Stephon Rose, 27, from Canarsie, Brooklyn said that these police tactics target minorities and low-income neighborhoods and once they have a criminal record, it’s almost impossible to come out of it. She said some of the laws are so obscure that not many people know about them.

“You’re treated like a hardcore criminal,” Rose said. “Whether you’re a murderer or you jump the turnstile.”

Rose said that detainees suffered emotional, mental and physical abuse as the cost of a small crimes. She said a resolution would be to provide education on these minor laws to make sure people don’t commit crimes they don’t know are against the law. 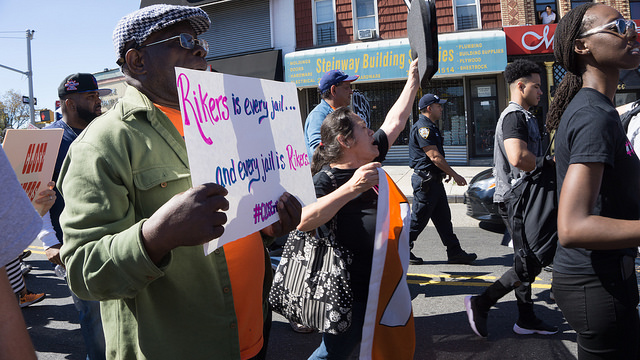 Protestors held signs with shocking statistics on the population of Rikers, as well as the amount of money, $209,000, being channeled into every inmate.

“The statistics say that 89 percent of Rikers [detainees] are Latino and black,” said Rose. “That number is disgusting.”

“There’s no reason why African Americans and Latinos are still minorities, but they’re the majority in our city jail,” Jarvis said. “As a whole, as a community, everyone should be out here supporting this cause.”

Pooja Kumbri, 23, from Harlem said that the best way to address people who have committed crimes is through compassion and understanding.

“So many people there for crimes of poverty,” Kumbri said. “Which is a larger issue than the individual.”

As the rally approached its destination, police officers patrolled the barricade put up to prevent the protestors from crossing that point.

“It’s ironic to see so many corrections officers protecting the island as if we want to go to Rikers Island,” City Council member Daniel Drom pointed out to the now halted crowd.