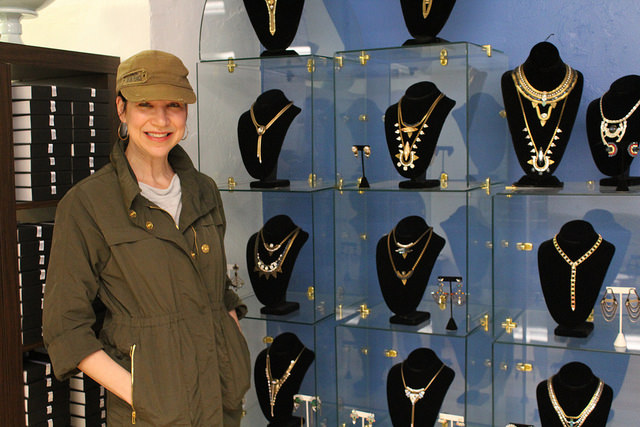 For many brides-to-be, finding the perfect wedding dress can be daunting. So it’s nothing short of jovial, with a matching sigh of relief, when they finally find “The Gown.”

In the case of Aliya Chandia-Lakhani, she felt triumphant when she found multiple wedding outfits while on tour in New York City

It was quite a fashion fairy tale for the Dubai-based corporate executive. She just got engaged and when she came to the city, she found herself in a shopping tour organized by Karen Parker O’Brien, the president of Style Room NYC Shopping Tour Experiences.

“At that time, I really had no intention of buying a wedding gown,” said Chandia-Lakhani. “But during the shopping tour, Karen introduced me to this wonderful dress designer who had the most beautiful evening and wedding gowns. We just bought clothes on the spot!”

And in fashion, that’s one sweet story that retail therapies are made of, as Parker O’Brien can attest to.

As a New Yorker and having been in an industry insider for more than 20 years, Parker O’Brien knows how vital fashion is to NYC’s business system.

Shopping and tourism, as  O’Brien put it, help drive the city’s economy. Her idea of organizing shopping tours seemed like a feasible business idea.

“Shopping tours have been around since I was a child,” said O’Brien. “So when I entertained the idea of professionally doing one myself four years ago, I decided to make it more customized, where I would take people to all these private designer showrooms and where it’s more intimate and fun to shop. When I talked to some people about it, they wanted to do it and after a week, I organized my very first tour and it just took off from there.”

Fashion’s ephemeral nature makes it a tricky industry, especially for designers who have to tread the thin line between personal creativity and what customers and retailers actually need and want. But a constant theme in this business is how lucrative it is.

Globally, fashion is worth US$1.2 trillion , and NYC is considered as one of its major capitals, along with London, Milan, and Paris.

From a business perspective, the city’s fashion subculture alone is responsible for employing more than 180,000 people, or 6 percent of the city’s overall workforce, with tax revenues accounting to US$2 billion. Latest statistics  reveal that there are around 900 international fashion companies are based here, and NYC is also the home to more than 75 trade shows and thousands of showrooms, both from established and emerging fashion designers.

“New York City is like the center of the world,” said O’Brien. “And when people come here to visit, they shop.”

Now, imagine what tourists—excluding locals and expats—can do to every cash register placed throughout NYC.

Last year, the office of incumbent mayor Bill de Blasio announced  that NYC reached an “all-time record” of accommodating 56.4 million visitors in 2014, translating into an overall economic impact of US$61.3 billion.

“I think people are drawn to New York City because it’s an exciting place,” said Jim Dykes, a friend of O’Brien’s and the president of his own tour company, Abuzz Around New York. “Today, tourists are more knowledgeable on what they want to see—and experience—in this city.”

The thriving tourism industry has a more parallel relationship now with fashion and style. Shopping tours like Style Room are pivotal in nurturing this symbiotic partnership.

“Visitors in New York City still like to eat and shop,” said Dykes. “They say that there are a lot of unique spots in this city that are not available elsewhere. Thanks to the internet, for example, more people have become more aware that New York City is a big fashion capital—but knowing who to call for the right places to visit is another thing, and that’s what Karen does for her clients.”

So how does it work? For  O’Brien, it’s all about a sense of mystery, if only to pique a visitor’s otherwise info-overloaded mindset.

For starters,  O’Brien doesn’t advertise the designers and brands that she works with. Instead, she gets to know her prospective clients beforehand first, like what they usually wear and how they build their wardrobe based on their size and lifestyle. She then tailors a tour plan for them, which involves deciding which designers can cater to them best. Her clients only discover who they’re going to visit—and shop from—on the tour day itself.

This system, as O’Brien explained, also protects the designers’ privacy, mostly because they also have separate arrangements with other mainstream retailers that can’t be publicly disclosed—and so far, tourists have been okay with the setup.

“I’ve had clients who ask me if we’ll go to somewhere like Chanel or Prada,” she said. “My answer is no, because I take them to American designers who are based here in New York City and I think they like it because they get access to unique, good quality merchandise and have bragging rights like, ‘Hey, I got this from a New York City designer!’”

For O’Brien, the best is yet to come for fashion and tourism as a whole, as New York City further encourages designers to pursue and manufacture their business and goods here (http://www.nycedc.com/program/made-ny-initiative).

“It’s been really fun bringing visitors and letting them interact with the designers I work with,” she said. “Of course, they’re talking about fashion but the next thing you know, they’ll be asking them for recommendations on where to dine out as well or what other activities to do in the city, too. It makes the whole experience more personal and they [tourists] get to fall in love with the city more.”