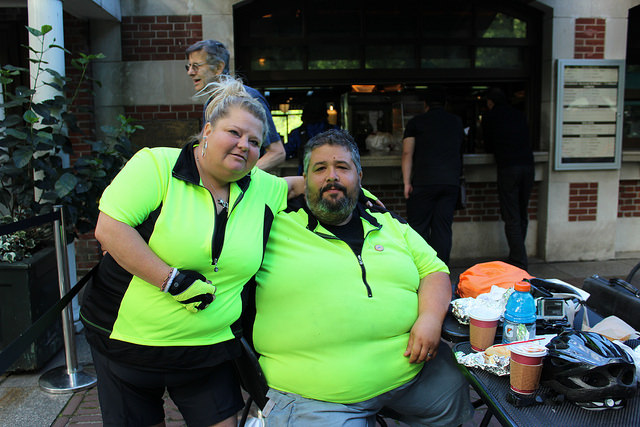 Eric and Angie are bike riding across America to lose weight and bring attention to the nation’s high rate of obesity. Photo By Astrid Hacker

Eric Hites, better known as “Fat Guy Across America,” pedaled into Central Park a little after 9:30 today. It was one of many pit stops along his 3,200 mile trek across country that he started ten weeks ago in Massachusetts weighing 560 pounds. The Danville, Ind native has since lost 75 pounds and plans to continue pedaling his way to fitness.

“When I first started I was waiting for people to make fun of me for getting on a bicycle you know, and I got over that quick,” Hites said at the Leob Boathouse as he sat with his wife over breakfast.

Hites said that he could have tried to lose the weight at home, but it would have been easier to give up. He initially decided to bike his way from the east coast to the west coast in an effort to win back his wife and take back his health, which he expressed on his GoFundMe page. He took to the Internet last June to ask for $15,000 to fund his trip and has raised $11,292 so far.

“I probably would have given up if I was at home,” Hites said. “I think I threw myself to the wolves by starting far away from home so I have to, I don’t know, being far from home makes it so I’m forced to do it.”

About a month into his journey, Hites succeeded in his goal to win back his wife when she joined him on the road with a bike of her own and a determination to fight for their marriage.

“We’re learning so much about each other, what our weaknesses are, what our strengths are and what we need to do to balance each other out,” Hites’s wife, Angie, said as she looked towards her husband and smiled.

Since pedaling out of Massachusetts, Hites has gained so much support from people all over the country sending him well wishes and encouragement. Many of them feel a direct connection to him through his “Fat Guy Across America” Facebook page where he and his wife post daily updates and often respond to comments from his supporters.

“I am a teacher in Texas. Our class follows you on Facebook. Your story is inspiring us and we talk about your success everyday,” Dena Domenici Poteet of Greenville, Texas, wrote on the “Fat Guy Across America” Facebook page Wednesday night. “We do have one request. We suggest to change your name to “FIT” Guy Across America. That’s what we call you.”

Though things seem to be off to a more positive note Hites said that along the way things weren’t always so smooth.

“I looked like a homeless person there for a while with my trailer,” Hites said. I was driving through Tiverton, R.I. and someone saw my trailer and thought I was a scrapper.”

Hites said that when he started his journey it was more about him and less about the people watching him. Now, over 75 pounds lighter, he said that he hopes to bring awareness to America’s obesity epidemic.
According to the Center for Disease Control,  over one-third or 34.9% of all American adults are obese.

“I kinda owe it to the supporters to bring the awareness and get other people exercising,” he said. “And now that we have the ‘Fat Guy Across America,’ we have all those people that I’m kinda responsible for to get them started on exercising.”

Hites started fatguyacrossamerica.com along with the FatGuyAcrossAmerica Facebook page to keep his supporters up to date on the progress of his journey. Once the trek is completed Hites plans to write a book on the experience.

Hites said that when he and his wife make it to California it won’t be the end but the beginning of their new life together. The couple plans to drive back to Indiana and take a few stops along the way to “do rides in each state.” He said that those stops are where he plans to focus on awareness.

“Get out and ride your first 500 feet and tomorrow ride 510, just keep building on it and then take a day off,” said Hites. “It’s your own speed, don’t judge yourself or everybody else. Do it your way.”