A church becomes a safe haven for the homeless 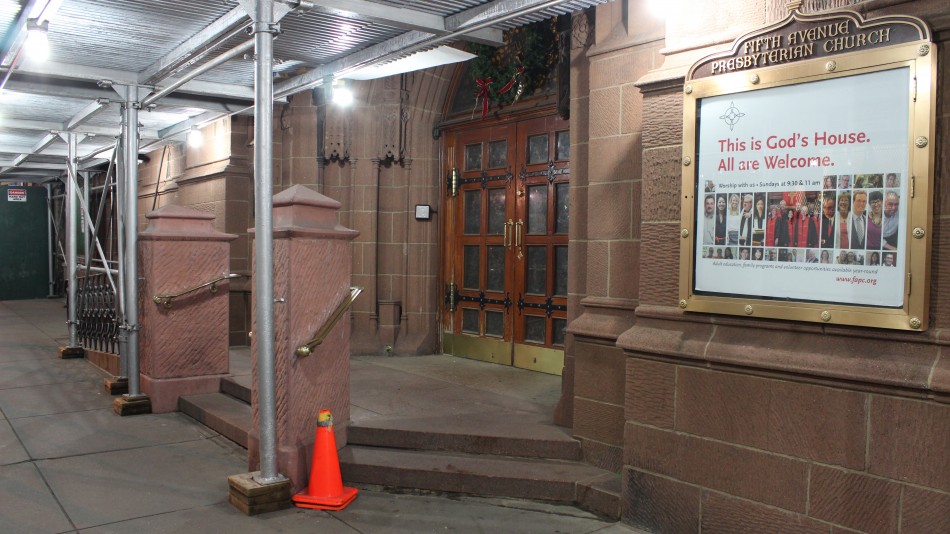 Obscured by scaffolding, the entrance of the Fifth Avenue Presbyterian Church was once home to 17 homeless men who sought refuge on church steps. Photo by Amina Srna.

The corner of 5th Avenue and 55th Street is the intersection of luxury watch and jewelry stores. The St. Regis Hotel, one building over on 55th, brings an affluent clientele to the Rolex and Des Beers shops at this corner, and on this mid-December evening, they are out shopping for the holidays, bundled in Canada Goose parkas.

Since 1875, this corner has also been the home for the Fifth Avenue Presbyterian Church. This time of year, it is the only building on 5th Avenue that isn’t decorated in twinkling lights or garlands. In fact, the majority of the building’s Victorian Gothic façade is almost entirely obscured by scaffolding, the red sandstone clock tower and steeple just barely peek out of the top. The only seasonal additions to the building are a simple wreath hanging from a cross above the front entrance, and a homeless woman sitting by the edge of the building, wrapped in a thin wool blanket against the cold, holding a sign that pleads for assistance.

The homeless have become a common sight in New York City, with the Coalition for the Homeless reporting a swell of nearly 60,000 homeless individuals in it’s shelters this past season. That’s as high as it was during the Great Depression, and it’s an 86 percent increase from ten years ago. Those are just the numbers of people who take refuge in city shelters, no one has a head count on those who would rather freeze to death than go into the system.

The Department of Homeless Services believes that houses of worship have the ability to influence individuals on the street who are fearful or resistant to city shelters. To reach them, the de Blasio administration will funnel $19.5 million beginning January 1, 2016, in order to incentivize churches to make space for homeless during the coldest months of the year. The new project, called the Opening Doors Initiative, hopes to double the amount of beds made available in churches by adding an additional 500. This year Fifth Avenue Presbyterian hopes to use those funds to make space for 10 homeless women.