For families of the 9/11 victims, the pain never ends 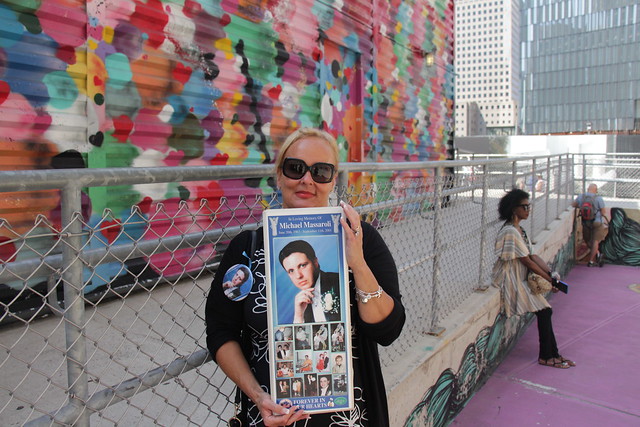 Diane Massaroli poses with a photo of her husband Michael. He was killed in the 9/11 attacks. She brings his photo every year to the memorial. Photo by Sydney Fishman

The families of 9/11 victims gathered at the 9/11 Memorial Museum Wednesday to remember, mourn and give voice to the trauma they have endured.

“She is my daughter,” she said in Spanish. “I was living in Brooklyn, and I saw the planes crash on television. My daughter was 21 years old when she was working inside the building.”

Her daughter, Marlyn Garcia, who was working at an insurance company inside the World Trade Center, was on the 100th floor when the first plane hit the North Tower. Garcia was watching television at the time of the attack and knew that she wouldn’t see her daughter again.

“I immediately felt trauma from the attack and I still feel a lot of pain to this day,” she said. “I had to move from Brooklyn to Florida because of it and it’s hard for me to return to New York.”

Garcia and her friend were wearing shirts with a photo of Marlyn and the year she was born. They attend the memorial every year.

Rosie Jaquez, from Corona, Queens, feels anxious every time she returns to Ground Zero. Her sister, Milly Jaquez, was a business owner and lived near the World Trade Center. Milly survived the attacks on the Twin Towers, but she became sick the last few years. In January, Milly died from liver cancer.

“She started to begin coughing, getting sick, Jaquez said.” I don’t know exactly all the symptoms, but she was getting slim and stuff like that. It occurred for five years.”

At first, Milly didn’t realize her cancer stemmed from 9/11.  She realized it when her friends were diagnosed with cancer at the same time as her.

“Then you know, she realized it was 9/11,” she said. “I didn’t ask questions because when you know, you know. It’s hard asking people questions, even family. It’s sad, it’s really sad.”

Jaquez said she has PTSD.

“It does affect you,” she said. “You get nervous, you think about it. It’s hard to remember, and you get flashbacks. I am in my sister’s house right now, and there’s trauma there. I am on the 30th floor. I can see the building, I see everything. You will never forget.”

Diane Massaroli left the ceremony, carrying a photo of her late husband. She was living in Staten Island and getting her kids ready for school when the attacks happened. Her sister-in-law was the first to call her that day. Her sister said, “Put the TV on, and which building does my brother work in?”

Massaroli’s s husband, Michael Massaroli, was working on the 101st floor when the plane crashed into the North Tower. He worked at the brokerage firm Cantor Fitzgerald.

“All I can remember is I had to get my son to school,” she said. “Everything felt crazy, but I knew I had to get him out of the house.”  Massaroli and her children use this memorial as a cemetery to remember Michael.

She battles what she called a “sort of PTSD.”

“When the weather changes, I feel more upset,” she said. “Certain smells trigger my anxiety. After this day is over, I feel exhausted, but I feel a relief that I can move on with the rest of the year. When this day comes, it’s right back to that day. Like 18 years never passed.”