From loss to service 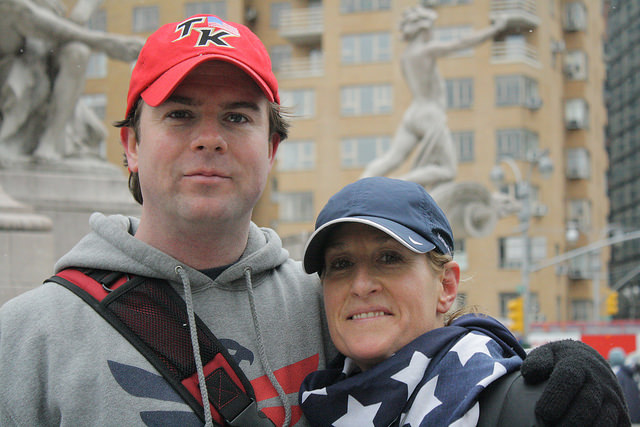 Joe Quinn isn’t one to sit idly on his couch every weekend, sipping coffee and reading the newspaper. Sure, sometimes. But more often than not he’s sporting sweatpants, running sneakers and a Team Red, White and Blue (RWB) T-shirt, preparing for a community run or social event with his teammates.

On April 26, the Northeast regional director and New York community captain of Team RWB – a national veteran organization – ran in the third annual 9/11 Memorial 5k with a handful of fellow teammates. Team RWB, founded in 2010 by Mike Erwin, a veteran of Iraq and Afghanistan, consists of community programs, which encourage veterans to stay active and engaged through physical and social activities. Quinn, 35, an Army veteran who served in Iraq and Afghanistan, and who lost a brother in 9/11, once needed the same services.

From basketball in Brooklyn to West Point

Growing up in Brooklyn, Quinn was a “local basketball legend” according to his brother Michael Quinn, 39, from Manhattan.

He had to play. Quinn was “in the zone” and felt the “flow,” an experience he said he couldn’t explain, that it was just a feeling he had as an athlete. Quinn was so good that Division I United States Military Academy at West Point recruited him in 1998 and offered a full scholarship.

During his first three years he suffered through boot camp, physical training, the rigors of academics and juggling basketball.

“Everything builds up your senior year,” Quinn said.

But on September 11, 2001, his senior year didn’t begin how he had hoped. Sitting in his Native American Literature class, Quinn was reading “A Yellow Raft in Blue Water” when he noticed that the metaphorical mice in the maze were off.

“You wake up, you go to formation, you eat for seven and a half minutes, you leave, you go to class, you take the same pattern to class, you see the same people,” said Quinn. “I remember being in class that morning of September 11th … [and] you know when something is off. You can almost feel it in your bones.”

His older brother Jimmy Quinn, 23, worked at the World Trade Center, but Quinn wasn’t sure which tower. Back in his dorm room on the phone with his mother, she asked how things were. Had he taken a nap? What was going on? His parents tried to protect him because they knew West Point was stressful and didn’t want to burden him further.

“It was like instinctually for her to be like, oh, how are things?” Quinn said. “I’m like, mom, are you kidding me, are you watching this? And then she broke down.”

The south tower fell first and Quinn was freaking out. Then the north tower crumbled. Picturing his brother in a tower was the biggest blow. He was asthmatic, and Quinn said his fear was more about his brother being scared than it was about him dying.

“We always hoped that it was just instant,” Quinn said.

His family never found Jimmy Quinn’s remains. Psychologically, Quinn said it was amazing how his mind could lie to himself.

“The whole goal was like, oh, he’s in a hospital with amnesia in New Jersey,” Quinn said.

In mid-December of 2001, Quinn and nearly 1,000 family and friends held a memorial service for Jimmy Quinn, showing his picture.

“Even that felt like fake,” Quinn admitted. He was in a haze and said he probably shouldn’t have graduated, but did with the help of professors and friends.

After graduating in June of 2002, Quinn had a five-year commitment to the military. He trained for six months at Fort Sill in Oklahoma before deploying to Iraq for his first tour in 2003.

One night in Anbar Province, Quinn recalled being with a soldier and thinking, how did I get here? He was a teenager when he decided to play basketball at West Point, and in the moment, at 22, that kid was gone.

In early 2004 Quinn returned to America, trained for another six months in Oklahoma, and worked as a general aide with Gen. Mark Graham, his now father-in-law. He met Melanie, his wife, who was 20. They had loss in common. Her brother Kevin had committed suicide in the summer of 2003, while her older brother Jeff was killed in Iraq by an IED eight months later.

“I was actually within the same area during that time that Jeff was in, so it was kind of surreal,” Quinn said.

He deployed for his second tour in the fall of 2006 and served in Iraq working in the Multi-National Corps – Iraq, the tactical unit responsible for command and control of operations. His tour lasted 16 months.

“In deployments … time does stay still mentally for you back home,” he said.

There’s a sense of being lost in transition. He remembers once asking if an Usher song was still popular, only finding out that it was two summers before.

Where do I fit in?

Upon returning from Iraq, Quinn attended Harvard’s John F. Kennedy School of Government, where he earned his master’s in public policy.

“I really wanted that opportunity to just take the time to learn. And then also just try to process the last six, seven years of, what the heck just happened?”

But transitioning wasn’t smooth. The day his brother died was the hardest moment of his life, but being in Boston while Melanie finished nursing school in Oklahoma was the hardest year. From the time he was 17 to 28 he was in a military environment, and suddenly, his community of comrades was gone. Further loss.

“I’m disconnected to my family and friends, I gained like 30 pounds because I’m hitting the snooze button, not working out, eating and drinking pizza, tacos and beer, just like non-stop … and I really couldn’t connect,” Quinn said.

Once he graduated – and became engaged to Melanie – he left for Afghanistan to work as a counterinsurgency advisor for Gen. David Patraeus from 2010 to 2011.

“You don’t want to be on the bench right? You want to be in the game,” Quinn said.

Although his personal life that he cherished in the states was gone, he felt no higher job satisfaction than being deployed. Quinn embraced his basketball flow again; he was “in the zone” in Afghanistan.

“I could have probably done that job the rest of my life, but then I came home mid-our and got married and Melanie said no more playing overseas, so that’s what kind of nipped it in the bud for me.”

He would have put up more of a fight, but knowing what his wife had lost, he thought it would be unfair. Not only did he deploy, his whole family deployed.

“Dealing with the loss of one brother in [9/11] and then having another one over there, it was a very stressful decade,” Michael Quinn said. “I think every time I knew he was back it was a good feeling.”

After all the loss, shifting and loneliness, Quinn found his fit with Team Red, White and Blue in 2013.

After reconnecting with longtime friend Mike Erwin, founder of Team RWB, Erwin asked if Quinn wanted to come on board.

“I was finding a lot of soldiers, a lot of guys that were having trouble back home,” Quinn said.

It made no sense to him that he was working at the Combating Terrorism Center at West Point worrying about terrorists and insurgents thousands of miles away, while soldiers back in America were hurting.

While not deployed at Team RWB, Quinn said he feels like he is because of his varied responsibilities, from working on strategic decisions including budgeting and development, to picking up cases of water for a run, such as April’s New York Road Runners’ “Run As One” 4-miler.

“I think it’s a good thing because I think a lot of these service men and women, they carry a lot of emotional baggage and I think doing this kind of helps buffer that feeling,”said his brother, Michael Quinn.

“It’s really the connection you make with veterans and people who are not veterans that you otherwise wouldn’t make. I think that’s really what it is. That sense of community and getting to know people who you 99 percent certainty would not have met.”

Rather than sit alone in a smoky basement bar, veterans and civilians push beyond limits, stay active, and stay engaged.

“The fact that I get to do [this] hopefully while helping veterans, is even better,” Quinn said. “I think that’s what’s transformative. I mean we’re going to have marriages, friendships forever [and] that’s what changes your life. Relationships change your life.”