While Ukrainians are defending their home, lands and families, people in New York, clad in the colors of the Ukrainian flag or the blue and yellow flag, are supporting them from overseas. Protests, marches, and fundraising events have converged in Chinatown and Little Italy, Time Square, Wall Street, the Russian Consulate and United Nations Headquarters to support Ukrainian communities and urge American leaders to provide more heavy weapons and humanitarian aid to Ukraine.

Razom for Ukraine, a non-profit organization, organized several events to demonstrate Ukrainian culture, including traditional music, dancing, and traditional costumes known as Vyshyvanka. Razom means “together” in Ukrainian. However, if Russian intruders are not stopped, these cultures and customs may be obliterated.

“We Stand with Ukraine,” a woman chants and holds her hands together.

Young women wear dresses stained with bloodstains on their necks, breasts, and genitals to testify to Russian soldiers’ sexual violence. According to the Prosecutor General’s Office of Ukraine on Twitter, more than 500 children were killed or injured during the war crime. Several allegations of rape were also sent to the office for investigation.

“Silence is a crime,” one of the protesters remarked. He urges people to speak out in support of the Ukrainian people and to condemn Russia’s invasion. People are also welcome to donate and help Ukrainians in need. 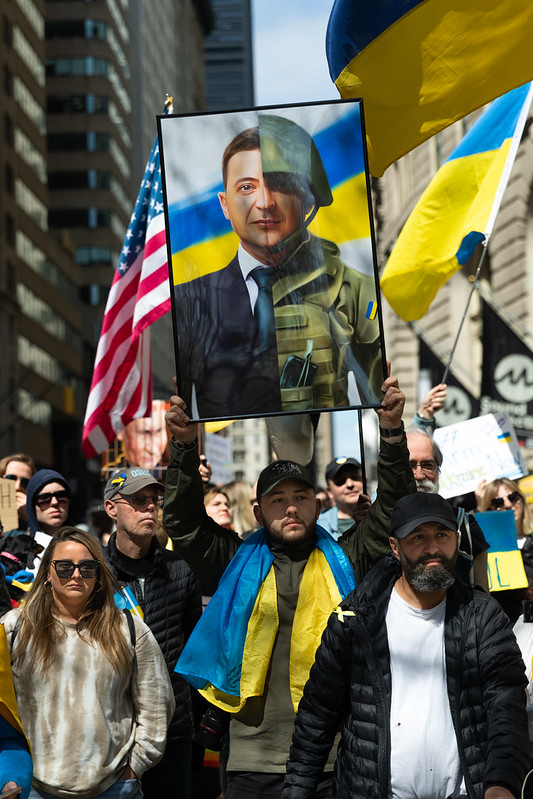 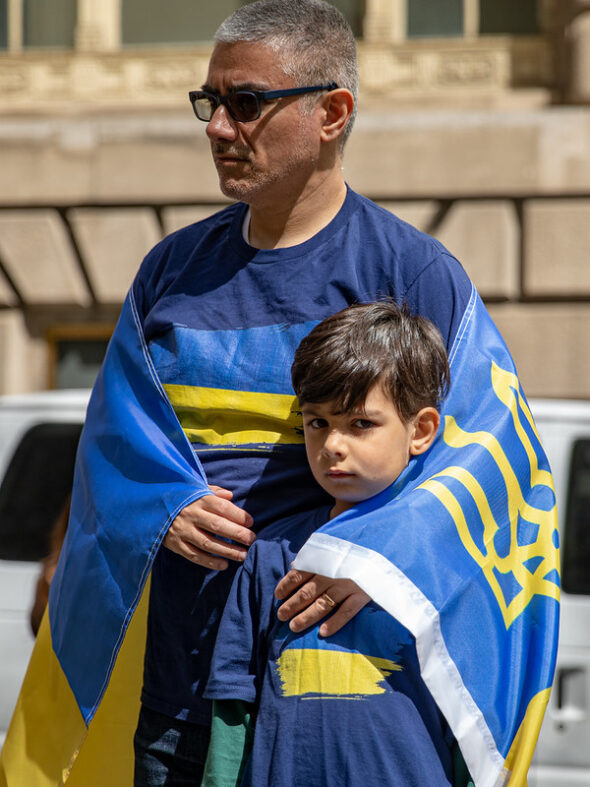 A man drapes the Ukrainian flag behind him and his son at Bowling Green Park, NYC. NY. Saturday, April 23, 2022. Photo by Mingmei Li 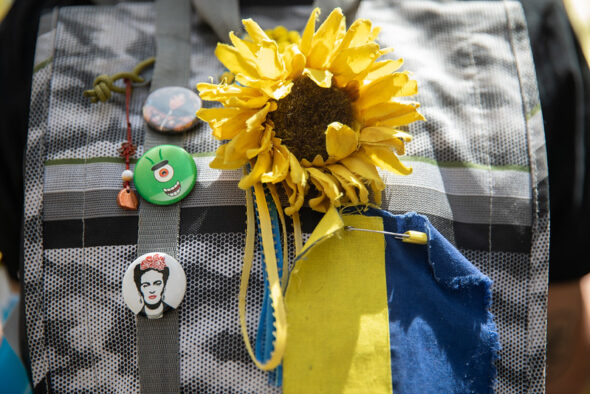 A sunflower and Ukrainian flag is seen on a backpack at a protest to support Ukraine at the Bowling Green Park, NYC. Sunflowers are the national flower of Ukraine. April 23, 2022. Photo by Mingmei Li 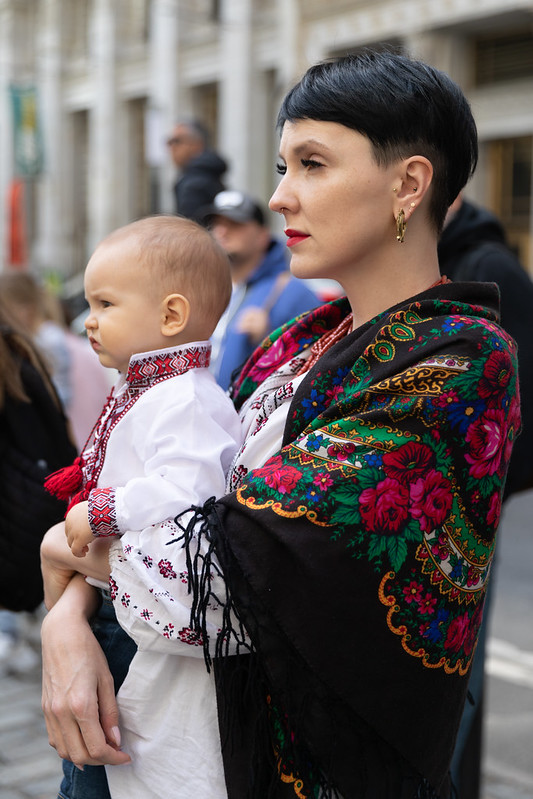 A woman and her son in traditional Ukrainian clothes at the protest at the Bowling Green Park, NYC April 23, 2022. Photo by Mingmei Li 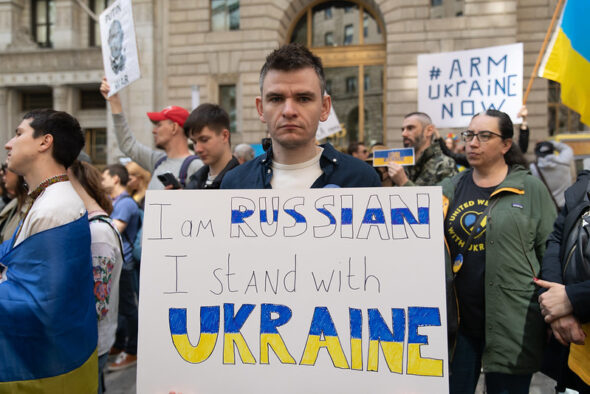 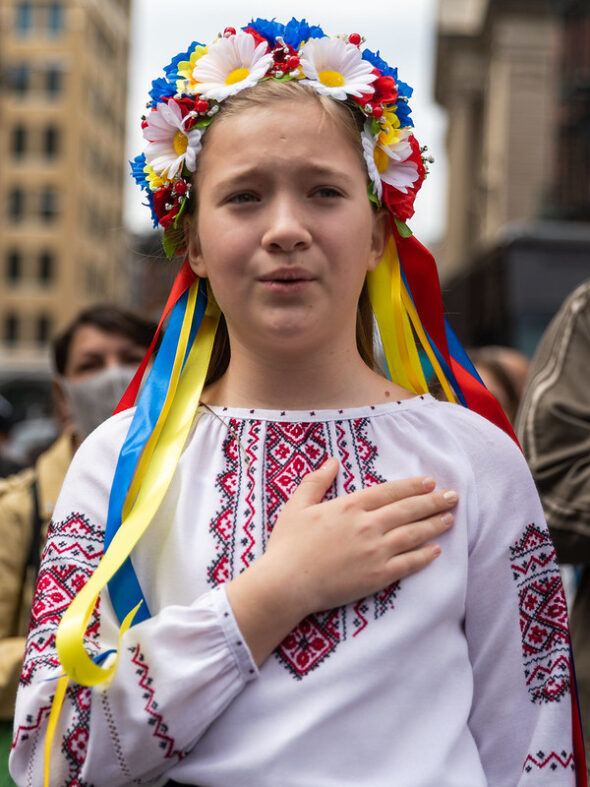 A Ukrainian girl pledges allegiance to the flag, as she sings the Ukraine’s national anthem, at Mulberry St., near Chinatown and Little Italy, NYC. April 16, 2022. Photo by Mingmei Li 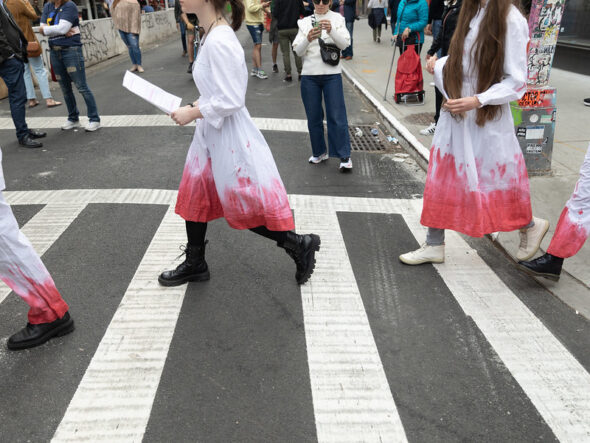 Young women wear dresses stained with blood, symbolizing the girls and women who were killed and raped in the Ukraine-Russia war at a rally in Chinatown and Little Italy, NYC. They told people stories about the cruelty of the war from the view of a teddy bear who was lying down in ruins which was bombed by Russian missiles. April 16, 2022. Photo by Mingmei Li 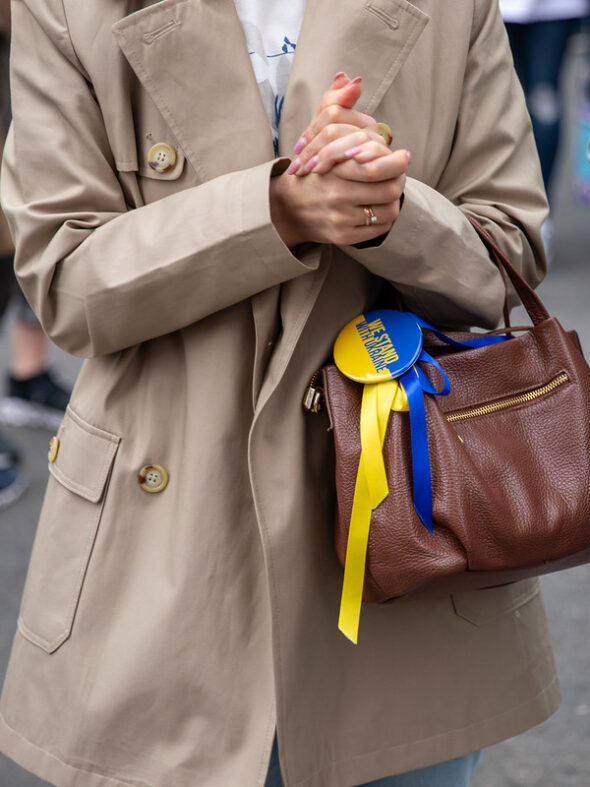 A woman wears a pin that says, “We stand with Ukraine,”at Mulberry St., near Chinatown and Little Italy, NYC. April 16, 2022. Photo by Mingmei Li 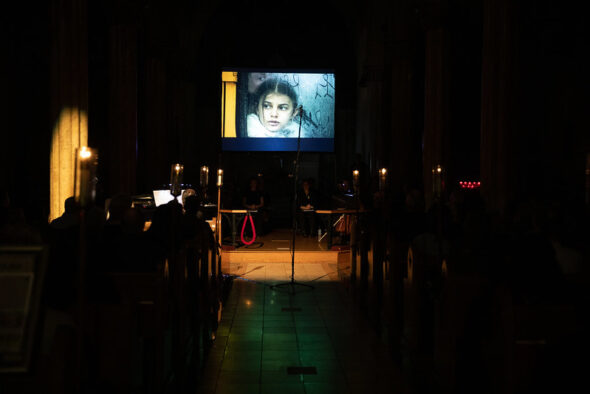 A girl’s photograph is put on a slide to show people the cruelty of war before a fundraising concert, which performed traditional Ukraine music at St. Malachy Roman Catholic Church, April 11, 2022. Photo by Mingmei Li