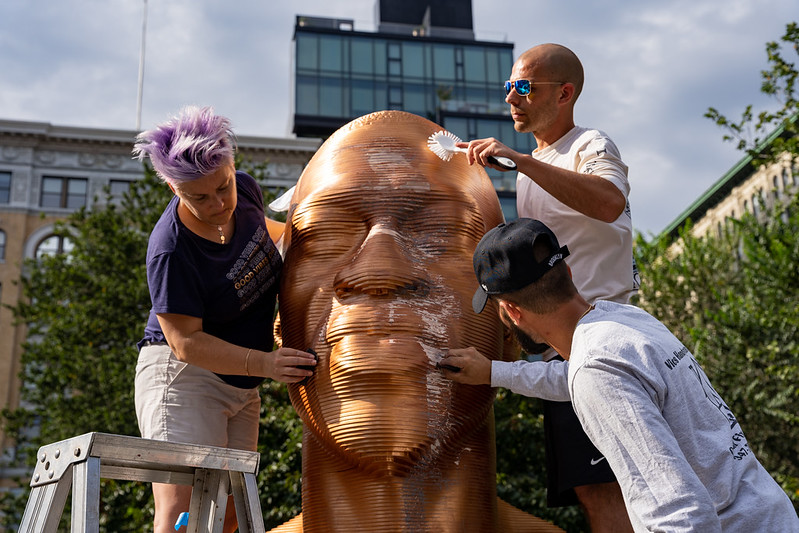 Volunteers clean up the sculpture of George Floyd that was defaced in Union Square Park. Photo by Nathan Morris

The ten-foot statue of George Floyd was defaced Sunday morning with grey paint in Union Square. It was the only sculpture vandalized out of the three displayed in the public art installation of SEEINJUSTICE, which included sculptures of Rep. John Lewis and Breonna Taylor.

George Floyd’s younger brother, Terrence Floyd, stood in front of the sculpture and looked at the damage. On Saturday he spoke at the unveiling.

“This is a spit on my brother’s casket to me,” Terrence Floyd, 43, of Brooklyn said. “They just keep defacing him. Why do people hate him so much?”

When some of the passersby saw the damage, they got right to work cleaning it up.

“A few of us saw that the paint was still wet, so I ran to Blick and got supplies,” said Steve Constantine, 33, of  Austin, Texas. “Then we got a group together to clean it up.”

The now volunteers scrubbed and brushed off the grey paint that was poured on the face of the mahogany wood and bronze painted sculpture.

LaCrown Johnson, 28, of Brooklyn said the vandalism felt like another attack on Floyd, who was murdered by  now ex-police officer Derek Chauvin in May 2020. He knelt on Floyd’s neck for over nine minutes. His death sparked protests around the country in which justice was demanded  for Floyd and countless Black people killed by police.

This was not the first time this statue of Floyd was vandalized.  In June  four men threw black paint on the sculpture as it sat on display in Flatbush, Brooklyn.  Another Floyd statue in Newark was also defaced in June. 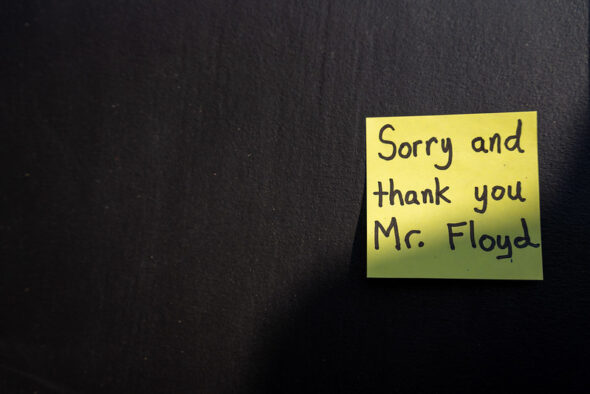 A note from an anonymous person left at George Floyd’s statue in Union Square after a vandal threw grey paint on it.  Photo by Nathan Morris

Police footage show a man mixing paint behind the sculpture then getting on his skateboard and tossing the paint as he skates away.

The NYPD is looking for a suspect who is wanted for criminal mischief after defacing the new George Floyd statue in NYC’s Union Square Park, and they’re offering up to $3,500 for useful information. pic.twitter.com/jTYOMyrrSr

Adrienne Lotson, 59, of Harlem came to see the sculpture and was not surprised it was vandalized.

“I came out because I knew it would happen eventually,” she said.

Jesse Bolden, 28, of Manhattan said trying to destroy celebratory images of Floyd does not help anyone or anything. “They waste time doing this instead of putting their energy into something positive,” he said. “If it doesn’t make you feel some type of way, what kind of human are you?

This is the first outdoor exhibit for Confront Art, an organization that teams up with artists to create art related to social justice.

Andrew Cohen, 44, a co-founder of the organization, was monitoring the cleanup of the statue.

“They (police) said they will investigate this as a hate crime, but there’s no way of preventing this from happening again,” he said.