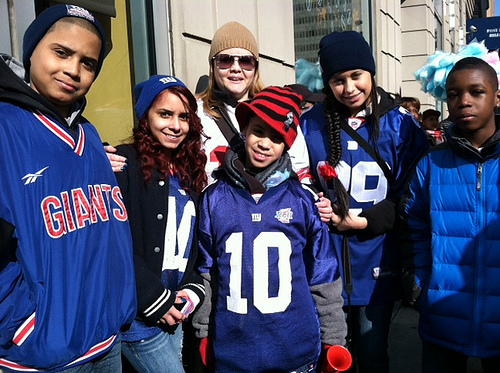 Dimitri Vega, 35, (Back, center) Gabby Velazquez, 16, (to her right) Ronni Gonzalez, 8, (front) and their cousins and friends. Photo by Edna Ishayik

A parted sea of blue jerseys and hats lined New York City’s Canyon of Heroes for this morning’s ticker-tape parade. The celebration was in honor of the Giants win over the New England Patriots in Sunday’s Super Bowl. Floats carrying the victorious football team cruised up the wide, sunny avenue to chants of “Let’s go Giants,” and bone-rattling vuvuzela honks.

At the tail end of the parade, where the floats turn off Broadway and snake down Worth Street, a family from Bushwick, Brooklyn, waited excitedly for just a peek of their team. Together, they reveled in some home team pride and relived happy moments spent watching games together as a family.

Dimitri Vega, 35, and her sister Denise Gonzalez, 36, took the day off of work teaching nursery school and third grade at Salve Regina Catholic Academy. In tow were a gaggle of kids playing a sanctioned form of hooky — nieces, nephews and their friends. Among the lucky youngsters were Gonzalez’s niece, Gabby, 16 in a perfectly plaited fishbone braid, and her son Ronnie, 8, bundled in fleece and a windbreaker.

Instead of trigonometry classes and spelling lessons the troupe was dressed up in red white and blue, ribbons in hair, hats on head, cameras in hand, ready to fully celebrate the championship win.

“I’m hoping to see Manning with the trophy,” Vega said.

Where they stood on the corner of Worth and Lafayette, the crowd was thick. People were packed in behind police barricades craning their necks, straining their gaze to catch the top of the parade. Fans amused themselves with chants and cheers — hollering gleefully at the sight of rolls of toilet tissue being launched out of windows, and reams of office paper raining down from above.

While the Vega and Gonzalez clan waited, they recounted memories of fun from this football season, and especially Sunday’s big game. The crew giggled and smiled as they recalled Raymond Gonzalez’s strict game-watching rules.

“We watch the games on Sundays at home and my husband is very superstitious, so we’re not allowed to move around or do anything,” Denise Gonzalez said. “We have to have the same seats. At half time, everyone gets to get up take a breather, come right back and make sure you’re in the same spot. And you’re not allowed to move until the game is over — no changing.

During one game, Gonzalez’s infant niece was wailing, but Raymond would not let her mom pick her up or comfort her because the baby started the game on her father’s lap, Vega said.

During the Super Bowl, hilarity ensued when he became overenthusiastic about how the game was going.

“I think my favorite moment of the Super Bowl was watching my uncle fall through a patio,” Gabby said. “He gets really excited about it and it just overwhelms him and he just fell through our patio.”

Everyone chuckled together remembering the scene — little Ronnie put his hand to his mouth and laughed. It was another funny episode shared among the family during a winning football season.

At around 11:30 a.m. the air started to fill with little bits of white paper and sirens wailed, announcing the approaching head of the parade. The Vega and Gonzalez crew got out their cameras, loaded Ronnie onto their shoulders and prepared to see what they could see.

“Even if you get a glimpse of them, it’ll be worth it,” Vega said.