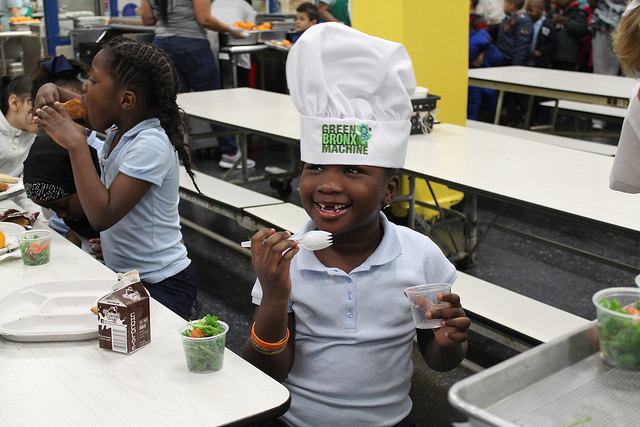 A Public School 55 student enjoys her second cup of salad at lunchtime. The salad was grown at the South Bronx school by students. Photo by Elizabeth Arakelian

The fluorescently lit cafeteria of Public School 55 in the South Bronx sparked to life as kindergarteners and first-graders file inside. Lunch ladies shush the students as they buzz with excitement: lunchtime today is special.

Although the kids’ lunch trays have the usual items of chicken and milk, even cookies for dessert, the star of the show is the side: a spinach and kale salad with cherry tomatoes and shallots, tossed in an oregano vinaigrette dressing.

Most students receive their cups of salad with a smile. Others push it away with a crinkled nose.

“There are tomatoes,” said one brown-haired boy in disgust.

Another first grader is on her third serving, the vinaigrette still slick on her full face.

The gourmet option wasn’t shipped in or catered by a guest chef. It was grown by the students themselves. While gardening in schools is nothing new, at PS 55 students are farming 37 varieties of fruits and vegetables in the most unlikely of places.

The K-5 school sits in the middle of the South Bronx housing projects in the unhealthiest county in New York state. The concept of fresh and natural greens meeting the mouths of developing children was a relatively foreign one, but the Green Bronx Machine now has students planting, cooking and eating produce all within the same city block.

Green Bronx Machine is a nonprofit that has partnered with the South Bronx school to repurpose an unused fourth-floor library, in a 100-year-old building, into a green sanctuary called the National Health and Wellness Center, which opened in January 2016.

The nonprofit is the brainchild of Stephen Ritz, the founder of Green Bronx Machine and self proclaimed CEO or “Chief Eternal Optimist of Bronx County.” The South Bronx is the poorest congressional district in the country, but where most see poverty, Ritz sees opportunity.

There are also outdoor gardens at PS 55, which sit behind a chainlink fence in the shadows of the towering brick projects. PS 55 is a zone school, so the students who attend it live in the South Bronx. The area has an abundance of unhealthy options and few fresh ones, said Ritz, who calls the cheap, corner store snacks a “MESS”.

“MESS is what I call Manufactured Edible Single-serve Substances,” said Ritz. “This is a very food challenged community. I mean you’re going to see a lot of very heavy kids walk around this community.” 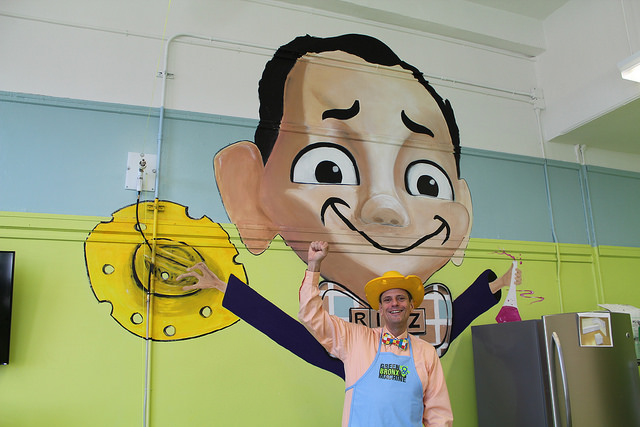 Green Bronx Machine Executive Director Stephen Ritz wears his famous cheese hat and bowtie in front of a painting of himself at Public School 55. If students are lucky, they may be rewarded for good behavior by getting to wear the hat and be “the big cheese.” By Elizabeth Arakelian

One in four children in Bronx public schools is obese, according to the New York City Department of Health. But the bright red doors at PS 55, and the garden beds that flank them, have become a welcoming sign for students. Behind them there will be hands-on learning and soil-stained clothes. Students that enter the school won’t just go to class, but they will also learn that they have the power to decide what goes on their plate.

“We find that when kids do cooking or grow vegetables and learn about the food on their own terms, that they’re much more likely to eat it,” said Bill Yosses, former White House Executive Pastry Chef and Green Bronx Machine partner. “ They’re learning this about themselves. They own it.” 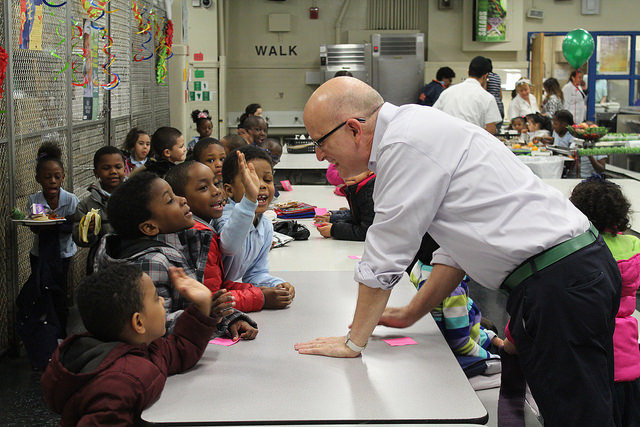 What started as an afterschool program in the Bronx in 2006 has since blossomed into an international movement with Green Bronx Machine chapters opening across America in Florida, Washington, DC, California, Vermont and Missouri, said Ritz. The organization is also partnering with 20 schools in Canada and Ritz has scouted opportunities in Mexico and Dubai, as well.

Green Bronx Machine has gained international attention and Ritz has taken students to be honored at the White House and featured in TED Talks. His work has led him to meet Pope Francis, present in the United Arab Emirates and he was a 2015 finalist for the Global Teacher Prize.

While Ritz has been successful in drawing attention to the needs of the South Bronx, for the past year and a half he has remained rooted at PS 55. It is here Ritz fosters growth in the students and their gardens. The indoor vertical farming towers in the National Health and Wellness Center burst with kale, chard and other lettuce varieties year-round. Soon, students will plant fruits and vegetables in the outdoor garden boxes. During harvest, they take home pounds of vegetables each week. 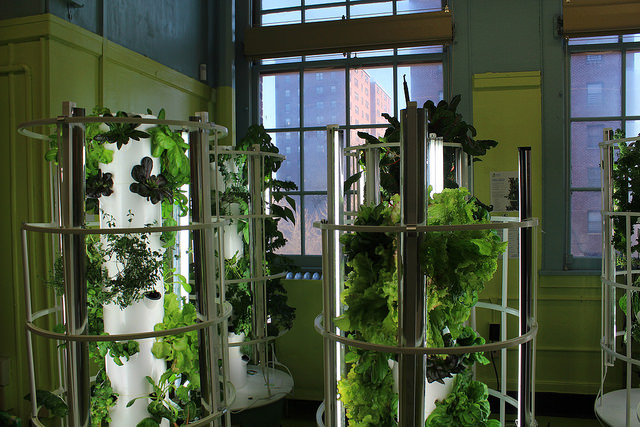 But farming at PS 55 is more than a fun activity — it’s actually school work. The Green Bronx Machine curriculum is aligned to Common Core educational standards, so the students are learning age appropriate skills in a hands-on way.

“It’s fractions, it’s decimals, it’s ratios, it’s proportions. It’s the art and science of growing vegetables aligned to content area instruction that allows everybody to benefit instead of just being a fun place where they come and cook and get their hands dirty,” Ritz said.

Plus, the students take on leadership roles.

“I mean I have plant police, leaf monitors, PH patrol, everything that you see here is kid maintained,” said Ritz, gesturing to the vertical farms.

The fourth-floor also boasts a mobile cooking station, equipment to record cooking demonstrations, and bicycles where kids can pedal to generate energy to charge their phones, or see how long they have to ride to burn off a soda.

Ritz even implements a reading to plants program where students sit by the vertical towers and read to the leafy greens. At lunch, Ritz swaps the plants out for bigger, more developed plants and tells the students “‘You did such a good job! Look at what you’ve done!’ So the kids really feel great and they want to perform,” Ritz said.

While the real benefit is students’ appetite for healthy and fresh produce, standardized test scores are also on the uptick and attendance has increased to 97 percent, according to Ritz.
Since its inception the Green Bronx Machine has also linked up 2,200 graduated students with jobs at places like Whole Foods and Fresh Direct.

When students aren’t learning in the National Health and Wellness Center, it is used for adult workforce development. Students and their families visit and tend to the garden throughout the year, as well.

“You literally see parents and community members shopping there for groceries,” said Ritz of the outside gardens which remain open 24/7 in the summer.

While the ultimate goal of the Green Bronx Machine is to move students up the food chain, the nonprofit is also shaping students’ self-esteem.

Fifth-grader Zuhaiti Arias said she likes being acknowledged for her hard work with the school’s gardening. “People are going to get to know me better and see who I really am,” she said.

At PS 55 choosing swiss chard over chips may be a small success, but it could lead to something greater, which students like Arias are reminded of each time they enter the National Health and Wellness Center and see the phrase “Si Se Puede” painted on the wall.

“That means ‘Yes we can’,”explained Arias. “ It means that we can do anything in the world if we believe in ourselves and do hard work.”