Standing a few feet from a building wall in the Bronx, less than one block south from the corner of Boynton and Watson Avenues, Wilfredo Feliciano gives Hector Nazario, middle, and Sotero Ortiz of graffiti group Tats Cru feedback on the group's new mural. The painting, started and completed Friday, Sept. 15, 2010, is a memorial wall dedicated by the family of a man called Headache, who was murdered in 2002, and his sister, who died this summer. Photo by Chelsia Marcius.

Graffiti artist Sotero Ortiz backpedaled some 30 feet west of a building wall, leaned against an iron rod fence and looked up at his half finished mural. He was pleased with the work so far — a blue sky, green grass and the black, bold outline of two childlike figures, one offering the other a hand into heaven.

As he stood there, watching other members of his graffiti group Tats Cru paint, neighbors and passersby also stopped and stared, mesmerized by the rattle of aerosol cans and swirling clouds of color.

“Hey, why’re you paintin’ over the other face?” one woman called out from the crowd, seemingly worried about a change to the wall in her South Bronx neighborhood. “The other face” was of a man called “Headache,” who lived across the street — less than one block south of the corner of Boynton and Watson Avenues — before he was murdered in 2002. A few onlookers nodded in agreement, as if they, too, did not want to see “the other face” go.

“The guy’s sister died, so we’re adding her in,” Ortiz called back.

In less than eight hours on Friday, the five members of Tats Cru finished the wall for Headache and his sister, who died earlier this year.

Since 1997, the group has painted more than 100 of these “memorial walls” — murals dedicated by friends or family in memory of the dead, many of whom lost their lives to drugs or violence.

“It’s not just a memorial wall,” said Ortiz, 47, known by friends as BG 183. “It becomes a family wall. It’s not like the newspaper,” noting that walls, unlike death notices or obituaries, are permanent fixtures in the community.

Ortiz said they almost always paint a memorial wall on the same block where the victim either lived or died. But he said sometimes a mural stands just too close to home.

“One mother lived right across the street from a wall,” he said, adding that the mural was not commissioned by the mother. “She had to look at that every day. Friends say, ‘Yo, that’s my man,’ but parents most times don’t want to see their son or daughter on some wall.”

“After two years, she couldn’t it stand it no more and moved out.”

Tats Cru member Hector Nazario said he understands. His son Bleu, 22, was shot and killed in July — just by being in the wrong place at the wrong time, said group member David Perre.

Nazario, known as “Nicer,” said he will never put his son’s face on a wall — and the others agree.

“Yeah, I think I’d throw up,” Ortiz said, looking down at his feet.

Perre nodded. “We don’t need a memorial wall for Bleu,” he said. “Every wall we do is for him.” 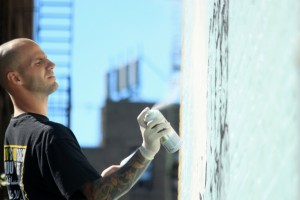 Davide Perre of the graffiti group Tats Cru adds to the group's new mural on a building wall in the Bronx, less than one block south from the corner of Boynton and Watson Avenues. Photo by Chelsia Marcius

Before Tats Cru even begins to paint, friends and family must work out the logistics among themselves. They must come to an agreement and first obtain landlord approval to avoid any trouble with the law.

Back in the 1980s, when Ortiz, Nazario and Wilfredo Feliciano, 44, known as Bio, formed a group that later became Tats Cru, Nazario said there was little funding for after-school sports or latchkey programs.

Graffiti at that time thrived as a Bronx subculture and “when creativity peaked,” he said.

Kids today seem to still appreciate that creativity. Marveling at the work on the new wall, two teenagers approached Ortiz and asked, “Hey how’d you guys learn? Did you go to school for that?”

Ortiz smiled. “Yeah, James Monroe High School,” he said, referring to the cat-and-mouse days of splashing color on subway trains, then running from the cops.

Both laughed at the joke, yet Ortiz did not expect it when the one teen said a James Monroe teacher “told me if you want to do graffiti, you’ve got to do it like Tats Cru.”

Now after more than 30 years of painting, Ortiz, Nazario and Feliciano, joined in 1997 by Perre and his twin brother Raoul, 35, appear in music videos of major pop stars, including Jennifer Lopez and Mariah Carey, as well as John Mayer’s “Waiting for the World to Change.”

They have been interviewed by Connie Chung and Lisa Ling. They have created ads for Hershey, Nike and Coca Cola. They have traveled throughout the United States and overseas, recently completing a four-day project in Poland.

But Ortiz said that despite opportunities to paint just about anywhere, they will continue work in and serve people of the Bronx.

“This is my community, where I was born,” he said. “Some guys look at us and think that, now that we have all this attention, that we’re rich or something. It’s not like that. We’re still here and I think they need us here. This is our home.”