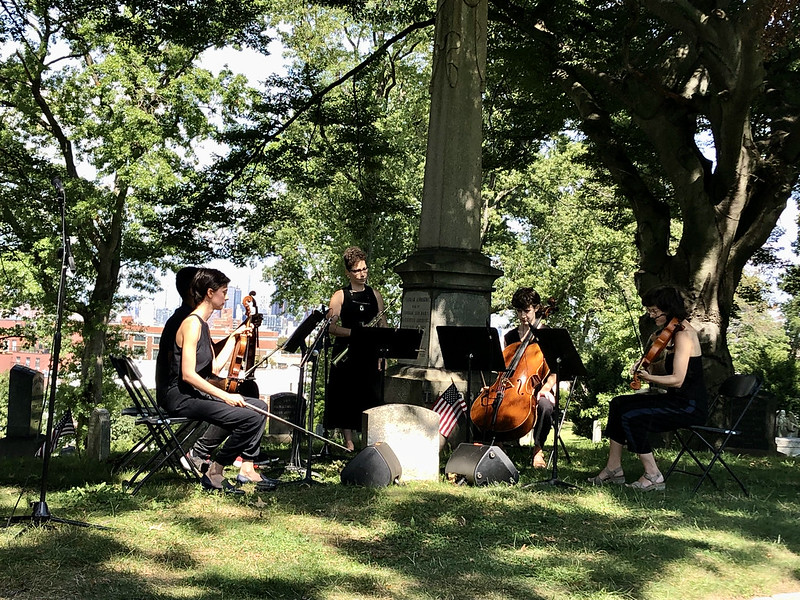 The single note of a saxophone traveled over the sunny Battle Hill in Green-Wood Cemetery toward the Lower Manhattan skyline in the distance. Splayed out on the grassy spaces between the tombstones, the spectators sat quietly and listened to “Memory Ground,” a musical performance of five works composed and curated by Mississippi-born, Manhattan-based composer Buck McDaniel to commemorate the 20th anniversary of the 9/11 attacks.

Performed atop the highest point in Brooklyn, N.Y. overlooking the site of the World Trade Center, “Memory Ground” is “a study in melancholy and a series of reflections on time and structure and memory, not just in relation to the 9/11 attacks but also in an abstract expression of loss and remembrance,”  said McDaniel, 27.“

Judith Lichtendorf, 78,  a lifelong Manhattan resident, said she was “shocked” by the music and the setting.

“I didn’t expect it to be this moving, it’s so beautifully written…It was really affecting and really beautiful, and the setting is crazy looking at all of the tombstones and all of the high rises, it’s a very magical, spooky place to be,” said Lichtendorf.

Patricia Flint, 57 a Brooklyn resident,  said the first work in the series was her ,“So love was crowned, but music won the cause,” was her favorite for its uplifting tone and energy despite the sadness and solemnity of the day.

“[It] was such a beautiful commemoration of the day, something positive for today,” said Flint.

Ilene Richman, 57, of Brooklyn, said the music and setting were “very apropos.”

“This was a perfect place to come to today,” said Richman. “I don’t know much about classical music, but I enjoyed it. It’s just a really great place to be on a day like today.”

The musical event coupled with its location atop Battle Hill made finding peace and comfort more manageable than at other events like the National September 11 Memorial, said Lichtendorf.

“Every once in a while, I’ll go down to the site. It’s not a great place to be. It’s crowded, and there’s a big carnival feeling about it,” said Lichtendorf. “[Green-Wood Cemetery] just seemed like it was going to be an incredible place.”

For some New Yorkers, the weight of the 20th anniversary coupled with the end of the war in Afghanistan added additional pressure to an already heavy day.

Flint described the end of the war in Afghanistan, like the 9/11 attacks, as “so much loss of life and so much injury, devastating injuries, that all feels for nothing.”

Richman said not only are big anniversaries like the 10th or 20th “more difficult” for her than other years because the tragedy of the day is “totally unavoidable, it’s everywhere all week…it’s more resident and sadder than some of the in-between years,” but also “because of the disastrous end of the war in Afghanistan, it’s just feeling very futile and mired in death.”

“It’s just a waste of life on such a grand scale.”