Groups across the city continue to combat food insecurity 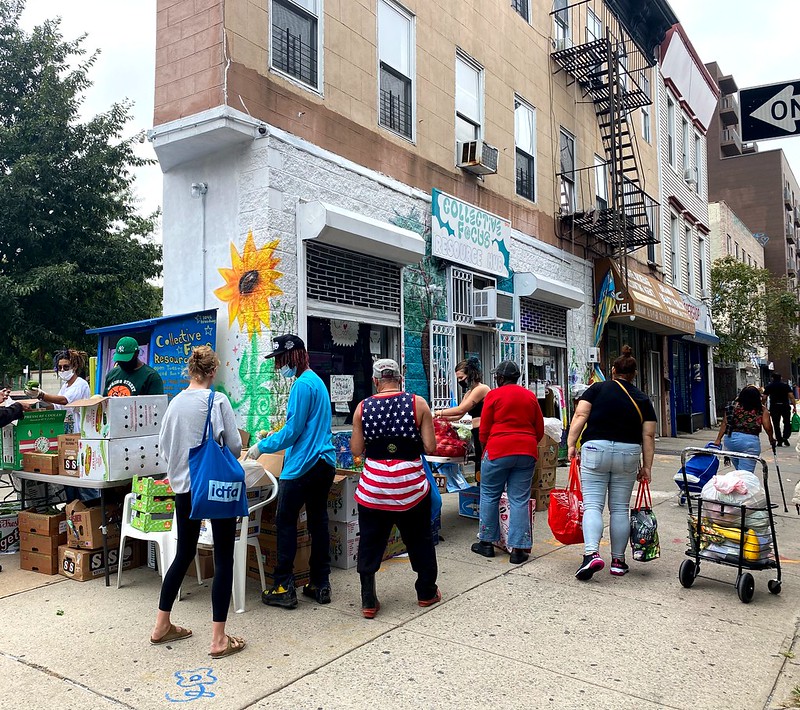 On a bright winter morning in Bedford-Stuyvesant, a line of tightly bundled visitors wrapped around the corner of the community resource hub Collective Focus. Every Tuesday, around 200 people wait with their shopping carts for the food distribution that’s become a lifeline for many in the community.

“People are getting really high quality food that, you know, in certain parts of the city is just inaccessible,” said Azad John-Salimi, one of Collective Focus’s volunteers.

In a city lauded for its expansive dining scene, 1.2 million New Yorkers were relying on emergency food programs before the pandemic, according to City Harvest. At the peak of the Covid-19 plight, those classifying as food insecure – defined as struggling with sufficient access to nutritional, affordable food – surged 36% to the historic high of 1.5 million NYC residents. Throughout the nearly two years of turmoil, organizations and advocates across the five boroughs have rallied to bridge gaps in access for as many residents as possible.

As of November 30th, Collective Focus has distributed over 72,000 pounds of food in 2021 – on Tuesday mornings alone. Every Tuesday morning, five pallets full of produce and shelf-stable goods are delivered from Driscoll Foods as part of the city’s Pandemic Food Reserve Emergency Distribution Program (P-FRED), which supplies food to pantries and access centers across the city.

“The ongoing thing that’s on a daily basis are our four fridges outside of the building, they’re filled multiple times a week, not just once a week,” said John-Salimi.

Collective Focus, which opened near the beginning of the pandemic, offers a variety of services to the community, including free clothing and books, art classes, and skill-based workshops.

“We’re really sensitive to different dietary preferences. So we have, you know, a meat fridge, we have a vegan fridge. We understand that people that are houseless have the same preferences and needs and restrictions or whatever that we do,” said John-Salimi.

While those struggling with food access are not confined solely to low-income and marginalized communities, these areas are most likely to be without easily accessible large supermarkets or sustainable options. Neighborhoods like the South Bronx, Bedford-Stuyvesant and Brownsville in Brooklyn, East Harlem, and East New York have long been considered some of the most severe food deserts in the city.

Residents who are food insecure often make tough decisions between competing obligations, like paying rent or going out of their way for something more nourishing. Access hinges on multiple factors, but financial resources always come into play.

“If you have the funds, then you have diversity in your diet. If you don’t have the money, you don’t have diversity, you have to go with what is available,” said Dr. Lewis Ziska, a plant physiologist from Columbia University’s Mailman School of Public Health. “And typically, what’s available are sort of the low cost, high carb, often processed food, that while it may feed you, it’s going to have some negative health effects from everything from heart disease to diabetes.”

Ziska believes that the issue remains obscure for many Americans because of who is typically afflicted. The stigmatization of relying on supplemental food assistance mirrors the broader national mythology about the character of poor people of color.

With more people than ever visiting food pantries – by some estimates, 28% of all New Yorkers visited a food pantry at least once during the pandemic – advocates are optimistic that the food insecurity narrative can become more realistic.

“There’s a lot of blame on the community versus on the people who plan out these things. People will eat what’s available to them. If there’s a McDonald’s across the street, why would I travel to a sandwich shop or farther away to go get a salad?” said Tiana Rainford, the youth program coordinator for East New York Farms. 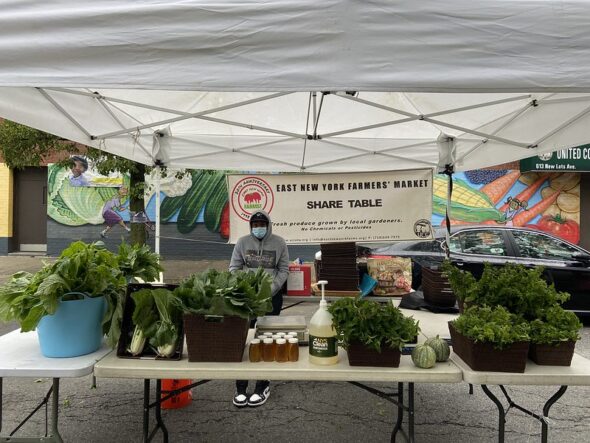 The organization believes access to food is a social justice issue and seeks to fill the gap in resources in East New York by putting power in the hands of those in need. With an all-encompassing, community-centric approach, East New York Farms operates two, half-acre farms and two community gardens, while also hosting farmers markets and food distributions. Everything grown in their Pink Houses Community Farm, located in the Pink Houses public housing project, is distributed for free. Part of their mission is to empower the community through youth programming, information sessions of food justice and sustainable agriculture, as well as offering garden assistancxe and composting  projects.

“We also provide resources for residents to independently grow crops that they feel connected to,” said Rainford.

She noted that many in East New York are Caribbean and seek to grow culturally-relevant fruits and vegetables that can be hard to find in the city such as bitter melon, okra, and hot peppers.

“The neighborhoods that are considered food deserts are low income, minority neighborhoods, where resources aren’t coming into these neighborhoods. We’re getting like the last of everything,” said Rainford.

Those who are food insecure are living in the broader context of the enormous volume of food being wasted by fellow New Yorkers. The Natural Resources Defense Council estimates that 68% of all food waste discarded was considered still edible, and the average household in the city wasted 8.4 pounds of food per week. Pantries like NY Common Pantry, which has been serving Harlem for nearly 40 years, stayed open throughout the pandemic to offer as much support as possible. 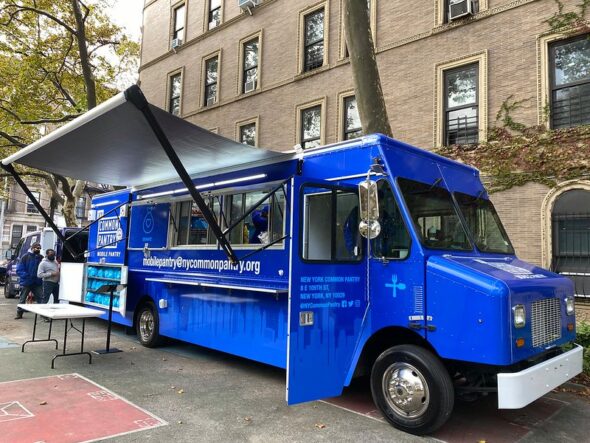 While timelines for the development of new grocery options in these neighborhoods can be uncertain and the pandemic’s constraints on mobility, NY Common Pantry looked to expand their services beyond their brick-and-mortar pantries. Early in the pandemic, they started a mobile pantry that continues to tour around the city five days a week.

“If you were to sign up for the mobile pantry, and you were in your neighborhood, when you go to get your groceries, you can also talk to a social worker, or you can talk to a case manager who can help you get those benefits that you need,” said Murtha.