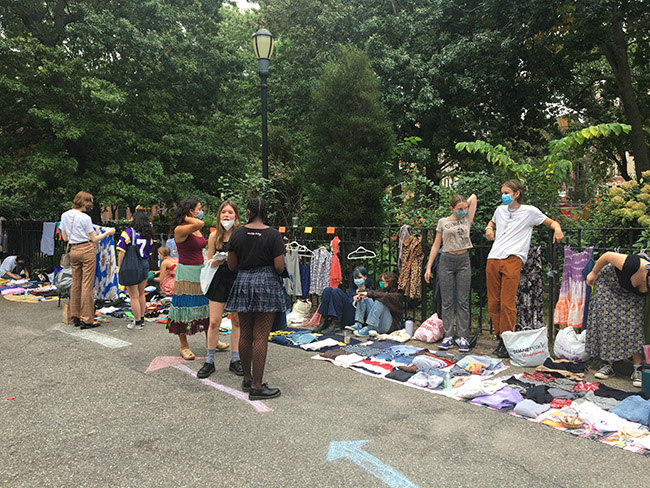 These were only a smattering of the clothes donned by a roughly 40-person crowd—though it morphed in size over the course of the day—composed largely of teens in Tompkins Square Park on the afternoon of Saturday, Sept. 26. They were the hosts and attendees of climate activist group Extinction Rebellion (XR) Youth NYC’s “Guerilla Flea Market,” a community in which 23-year-olds are old and most members still attend high school, according to XR Youth U.S. Action Coordinator Alejandro Vasquez. While we didn’t cross paths during the event, he filled me in after the fact along with Lucia Harrison, another NYC-based activist and flea market organizer.

Clothes of similar styles to those sported by the XR Youth NYC members and guests hung coolly from the surrounding fence and lay on display across multi-colored fabric blankets. The young activists were dealing in goods from their own closets, catering to fellow XR Youth NYC members and to visitors of Tompkins Square Park who had heard of the event through word of mouth, according to 17-year-old Westchester native Harrison, who is a co-coordinator of XR Youth NYC’s “Fashion Task Force.”

Sharing the paved, performance-suited section of Tompkins Square was a punk rock band, with an equally easily-identifiable following of mohawk-wearing park-goers at their flank.

“It catches people’s attention,” explained 18-year-old Vasquez, adding, “especially when you have a bunch of young people and all in like, not weird clothing, but I feel like a lot of us are like, We’re different. We’re indie.”

XR Youth NYC came to Tompkins Square Park to cause a scene, albeit peacefully, according to Vasquez, after months of delay due to COVID-19. The park caters to a wide array of East Villagers—dog owners, basketball players, musicians, and more—allowing members of XR Youth NYC to simultaneously stand out (with their youth, their message, and their style) and fit in (like every other “individual” who frequents the down-to-earth East Village hang out). Now, the group is looking to attract new members through an “introduction call,” to be hosted over Zoom on Oct. 11, according to an XR Youth NYC Instagram post. Harrison said she viewed the flea market, one of the group’s latest organized events, as an outlet to engage and support the surrounding community.

“Just the idea of having the money go directly back into the community,” said Harrison, in a conversation over Zoom, “having it be like 60 percent has to be donated, was a way of giving back and doing something that would not only benefit the environment, in the fact that it’s all used clothing and it’s getting a new home rather than sitting somewhere or whatever, but also like physical money and food and supplies are going right back into communities that it can benefit directly.”

Now in her final year at Ardsley High School in Westchester County, New York, where she’s taking classes in-person two out of five days a week, with the rest taught online, Harrison first joined the fight for climate justice as an activist in the “Fridays for Future” movement, which was spurred by Greta Thunberg’s school strikes beginning in Aug. 2018, according to the FFF website. She joined XR Youth NYC in February and is determined to keep the group’s values alive beyond her dwindling time in high school.

“One of the main things about XRYNYC that makes it so special is the community and emphasis on regenerative culture, in ourselves and the communities we work to better, so no matter where I end up I will be keeping those values with me, and implementing them into my life,” she explained in an email.

Vasquez similarly got his start through “Fridays for Future.” Now, he’s held a variety of positions within the XR organization, from initially running an XR TikTok account, to serving as XR Youth NYC’s Action Coordinator, and ultimately assuming the duties of XR Youth U.S. Action Coordinator.

Shortly after the Tompkins Square Park event, Vasquez moved from Connecticut to Washington, D.C. to begin his first year at American University—where he’ll study Spanish cinema, German, and Arabic in his first semester—and to reinvigorate a previously defunct D.C.-based extension of XR Youth.

He says his passion for activism is an inextricable factor of his identity.

Founded one year ago as an offshoot of XR Youth U.S., which had its origins in “Rebellion Week”—started in London in 2018—XR Youth NYC’s primary goal, according to Vasquez, is four-fold. He explained that those with power must “tell the truth” about the state of the global environment, must take decisive action (“our government and other governments need to stop greenhouse emissions by 2025”), must allow local citizens to steward their own communities, and must extend power to indigenous populations, “especially because of all the terrible things we’ve done.”

“We’ve tried to use non-violent direct action in a lot of different ways, because it’s causing disruption,” Vasquez explained. “I feel like disruption’s the thing we want to get rid of business as usual.” He believes that working in such a manner “not only builds community, but also builds organizers and builds people to actually realize that they can cause a big change.”

The members of XR Youth NYC took a milder approach with their more recent event in Tompkins Square, choosing to sell and trade clothes, accessories, and knick knacks—though mostly clothes—and donate at least 60 percent of proceeds to local organizations.

Harrison put together a list of pre-approved donation recipients, including community fridges in the Lower East Side and beyond, “Mi Casa Resiste” (a Bushwick-based “anticapitalist collective” working to “fight the displacement & criminalization of low-income Black & Brown families,” according to the group’s Twitter page), and a COVID-19 relief fund for sex workers in New York, to name a few. She encouraged all 32 sellers to individually donate a portion of the money made from their personal sales.

Thick, colorful arrows drawn with sidewalk chalk urged curious thrifters to begin their procession through the market at a welcome booth of sorts: a white sheet spread over the ground boasting, among other necessities, a hand-drawn sign, a few bottles of hand sanitizer, and a sleeve or two of Oreos.

Among the wares for sale or trade:

A free pair of chalk-colored Reebok sneakers—the very same that I wear on a near-daily basis.

And much, much more.

Budding artists got a chance to share their work, too—some offered stacks of stickers with Keith Haring-style figures proclaiming “TRANS IS BEAUTIFUL” while others took to creating personalized works on the spot. Vasquez quickly reached for a pair of obviously well-worn, once-white sneakers to show over Zoom as an example. The right shoe now bears a “Sharpied” crescent moon above a cartoon figure proclaiming, “FUCK COPS,” while the left is designed with a sun drawing and a matching cartoon human chiming in, “PROTECT UR FRENZ.”

From a distance, seated on a nearby bench or basking on a picnic blanket in the park’s fenced-in grassy mound, the flea market probably looked to be no more than a homogeneous flurry of trendy teens, Harrison and Vasquez included.

A humble guise for a group that wants, quite literally, to change the world.