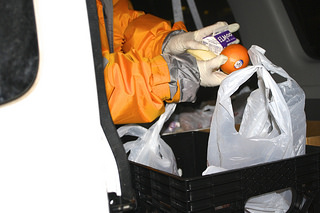 The Grand Central Food Program delivers meals including an orange, a loaf of bread, a carton of milk, and hot soup. Photo by: Talia Avakian

A Styrofoam container of hot soup, a loaf of bread, an orange, and a carton of milk may not seem like much of meal, but for the increasing number of homeless people living in New York’s streets, these meals provided by the Coalition of the Homeless’ Grand Central Food Program is often their only meal of the day.

New York City’s homeless population continues to increase in 2014, and with this year’s harsh winter overpopulating many of the available shelters, more and more homeless people are forced to live on the streets.

“Most of the individuals we serve work, but can’t afford housing,” said Farnell Williams, who has been volunteering for the non-profit program for the last 20 years. “And when they have five or six children and shelters won’t accept or only take in a certain number, they don’t want to be separated from their kids and so they’re left out on the street.”

Williams, 42, of White Plains, West Chester, has witnessed the increasing numbers during his many years with the program. 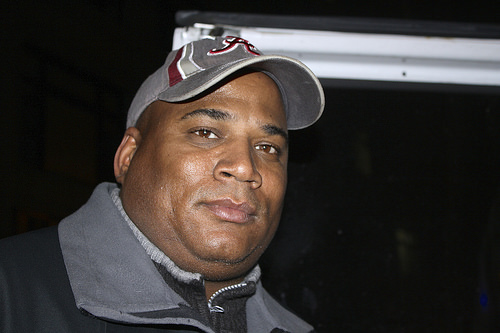 Farnell Williams, a 20 year volunteer, drives the uptown van in addition to distributing food and coats. Photo by: Talia Avakian

“The numbers of people we serve out on the streets have increased, and it’s unfortunate that in this completely wealthy city, we have this many homeless people,” said Williams.

In order to estimate the number of homeless individuals who live on the streets, the Department of Homeless Security conducts a yearly Homeless Outreach Population Estimate, or HOPE, with volunteers searching the city’s streets, subways, and parks to locate those who permanently live in these areas.

The numbers are used to allocate resources like shelters, outreach assistance, and drop-in centers throughout neighborhoods. However, restrictions the department must place during HOPE can leave a number of individuals out on the street overlooked.

“We don’t go into private businesses, residences, or buildings,” said department worker, Tonie Baez. “Particularly on a night where it’s very cold, you’ll see that there are large group of people inside these places that may be homeless and are going inside to keep warm.”

For the coalition’s program assistant, Bryan Moran, having neighborhoods where outreach is limited makes getting food to these areas crucial.

“We visit stops like South Ferry with people sleeping in the Staten Island ferry terminal, and we don’t see a lot of community outreach, soup kitchens, or mobile soup programs out there,” said Moran. “I mean even in the Upper West Side, a neighborhood known for it’s wealth, there’s still a lot of food insecurity in the neighborhood.”

The Grand Central Food Program delivers meals including an orange, a loaf of bread, a carton of milk, and hot soup. Photo by: Talia Avakian

The Grand Central Food Program’s mission is to continue delivering hot meals 365 days a year, having continued its daily routes to uptown, downtown, and the Bronx throughout blackouts, Hurricane Sandy, and this year’s freezing temperatures.

“I don’t consider going out in these conditions crazy, because with the people we’re feeding, they’re in crazy situations,” said Farnell. “We’ll go home to a warm home, but these people are still out on the streets.