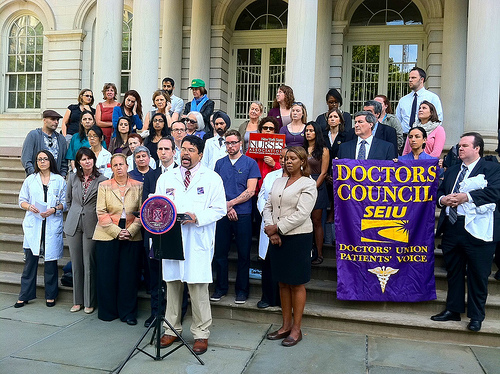 Dr. Matthews Hurley, Vice President of the Doctors' Council SEIU, speaks at a press conference held in front of New York City Hall. Dr. Hurley and more than two dozen other nurses and doctors joined in support of a bill that would give paid sick leave to all New Yorkers. Photo by Timothy Weisberg.

Bill Jordan never thought seeing his patients on a regular basis would be considered a luxury. The Harlem native and family doctor at the Montefiore Family Health Center in the Bronx has become increasingly concerned about patients unable to visit when they first get sick because their employer does not offer paid sick leave.

“I have patients that go without seeing me for months because they are worried about taking time off from work,” Jordan said. “They’re nervous about losing their job.”

Jordan, 36, the Co-Chair of the Policy Committee for the Public Health Association of New York City (PHANYC) joined more than two-dozen other doctors, nurses, and other health practitioners at the steps of New York City Hall for a press conference this afternoon to support their displeasure with the lack of access to paid sick leave for over one million New Yorkers. 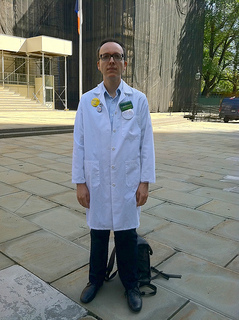 Dr. Bill Jordan before a press conference at City Hall Sept. 19. Dr. Jordan is a family doctor and Co-Chair of the Policy Committee for the Public Health Association of New York City. He joined more than two dozen other nurses and doctors in support of legislation that would provide paid sick leave to all New Yorkers. Photo by Timothy Weisberg.

Jordan recalled a time when a young boy had a bad reaction to something he ate. With hives all over his body and difficulty breathing, doctors he saw initially could not figure out the root of the allergic reaction. The patient’s mother implored Jordan to find a cure fast.

“She begged me to figure out what was going on and try to make him better right away because if she took anymore days off from work she would lose her job,” he said.

According to the Women’s Institute for Policy Research, almost half of all working New Yorkers (1.58 million) do not have access to paid sick leave.

“Bottom line, we need to invest in public health,” Dr. Mary Beth Morrison, a PHANYC board member, said at the press conference. “Paid sick days are one small step to a more robust public health infrastructure.”

The campaign’s roots date to 2009, when 39 City Council members signed off in support of the Paid Sick Time Act, legislation that would guarantee five to nine paid sick days to all employees, according to Joe Dinkin, Communications Manager for the Working Families Party.

But Christine Quinn, the City Council Speaker, has fought the bill, arguing that the costs threatens small businesses. according to the New York Times.

Among City Council members that support the bill and attended the press conference were Council members Gail Brewer of District Six, Upper West Side, and Jumanne D. Williams of District 46, representing Flatbush/East Flatbush, the Flatlands and parts of Midwood and Canarsie. Working Families Party–a grassroots organization that also supports medical care for all and raising the minimum wage–broad coalitions such as the PHANYC, the New York State Nurses Association, and the Doctor’s Council of the Service Employees International Union (SEIU) were also there in support of the bill.

Despite increased support from council members, Brewer described pushing the bill onto the City Hall floor as a “complicated process,” with no timetable for enactment.

According to Williams, the bill promoting more employees’ rights should be a no-brainer.

“The only people that should be opposed to this bill are people who have never gotten sick or people who never get sick,” Williams said.