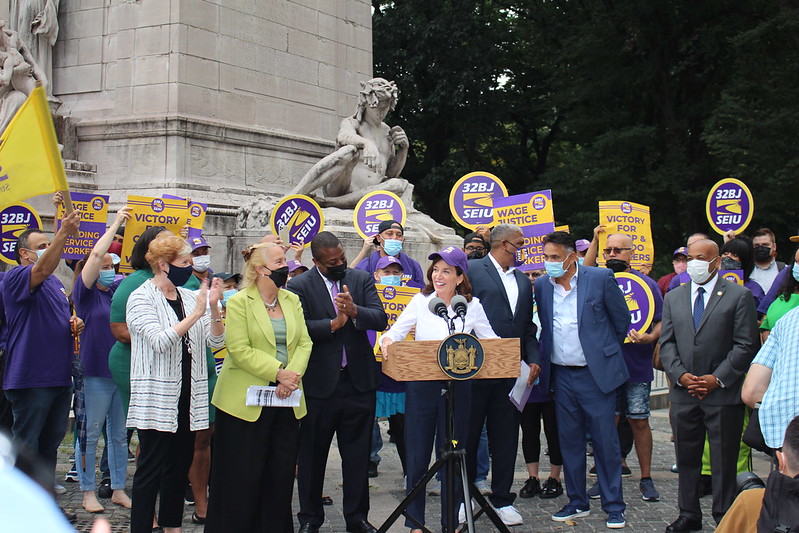 Gov.Kathy Hochul took her celebration of her union salary boosting bill to Columbus Circle as she stood with service workers and union members  yesterday to promote legislation that gives more than 2,000 non union building service workers in luxury condos and co-ops pay equity with union workers.

The bill was one of four pieces of legislation signed by Hochul aimed at improving workplace safety and tackling wage inequity. The new law will increase wage rates for building service workers from $15/hour to $26.45/hour or more––the rate that SEIU 32BJ union members currently receive––along with healthcare benefits.

“You are the ones who make this city happen,” said Hochul. “We’re gonna let people know that the most unionized state in America is proud of that. We’re going to increase our ranks and increase the influence of labor unions under my watch.”

A group of around 25 union members, all clad in purple t-shirts with the union logo, stood around Hochul as she spoke. Cheers swept the group, flags with the union symbol were waved with excitement, and signs declaring “Victory for co-op and condo workers” were held overhead. 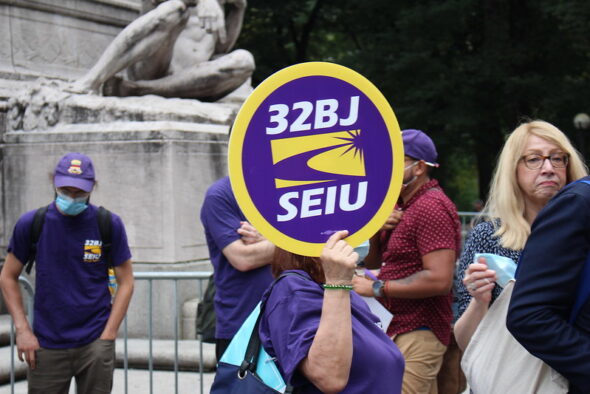 A 32BJ Union Member holds a sign with the union logo at an event highlighting the passing of prevailing wage legislation in Columbus Circle on Friday, Sept. 17, 2021. Photo by Annie Jonas

This is Hochul’s first piece of legislation signed into law since taking office replacing former Governor Andrew Cuomo and becoming the first female governor in the state’s history.

But despite the fanfare, many of the workers were just grateful for the wages the law brings.

Edil Martes, a Brooklyn resident, has worked as a porter at a Manhattan condominium for the past eight years. He said he loves his job but as the only porter in the building he is “constantly overworked and overwhelmed and making just above minimum wage.”

Martes has faced many challenges in the past year and recent months. His mother died of COVID-19 complications and although he was able to afford her cremation, he cannot afford to bury her. His basement apartment was flooded by Hurricane Ida and he has had to relocate to his partner’s family’s house while he figures out his next steps.

“These are the challenges when you’re living paycheck to paycheck and can’t save for a financial emergency,” said Martes. “I’m happy to know that New York state legislators passed a bill that requires our employers to pay the prevailing wages to support us…[and] to put an end to this injustice.”

Renzo Ramirez, a Brooklyn resident who has been a 32BJ member for two years, said workers doing the same jobs as their unionized counterparts “are barely making minimum wage,” but with the passing of the prevailing wages bill, they can finally “g[e]t paid what they deserve.”

“Workers have a real voice in the union,” he said, “and the more we grow, the stronger we are when we have to stand up to our employers for disrespecting us.”

The law specifically applies to workers in buildings that receive Cooperative and Condominium Tax Abatements, according to a press release from SEIU 32BJ. 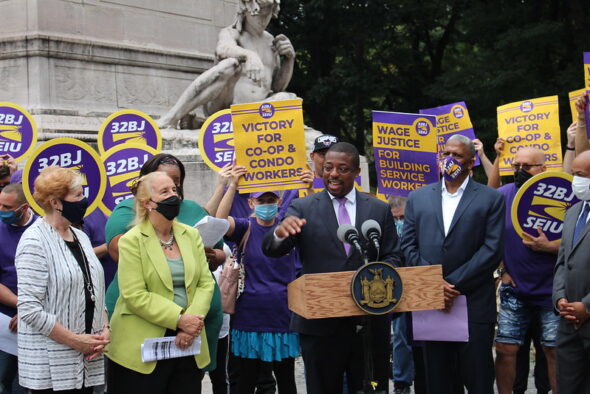 “If the state gives tax abatements to luxury co-ops and condos, the least we should expect is that there are prevailing wages and benefits for those who work in those buildings to keep everybody safe. That is the kind of New York state that I want to be a part of,” said Lt. Gov. Brian Benjamin.

Benjamin served as senate sponsor to the bill when planning began two years ago and worked alongside New York Assemblywoman Carmen de la Rosa to see the bill’s passage.

Benjamin’s father is a retired member of 32BJ and worked as a building service worker in Manhattan. Benjamin said unions had a profound effect on his family and success.

Hochul signed the bills in the neighborhood of her immigrant grandparents in Buffalo, N.Y., both of whom were members of unions.

“I will never forget what labor unions did for my family, lifting them out of extreme poverty and living in trailer parks,” Hochul said. “And like so many others who come to this country in search of a better life, the labor union movement helped elevate all of us in the entire family for generations. I’ll never forget what that did for me personally.”