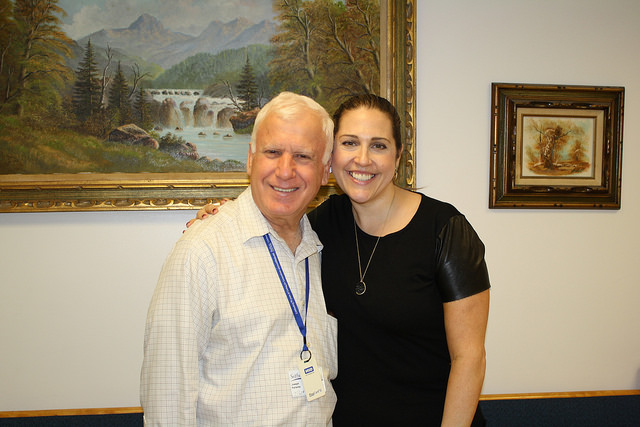 Aided by volunteers, one by one a small group of Holocaust Survivors slowly got up, formed a circle and danced “The Hora”, a traditional Jewish song of celebration.

“This is the music of their childhood,” said Joseph Pariente, a 63-year-old social worker from Brooklyn. “This music, that they hear, brings them back to the childhood that they did not have.”

Traditional Yiddish songs were played at The Flatbush and Shaare Torah Jewish Center this afternoon in Brooklyn. With help from New York Cares Volunteers, the Self Help Inc.’s Nazi Victim Service Program used the Brooklyn synagogue to host a social event bringing about 50 holocaust victims together. Friendly chatter or “schmoozing” filled the room for the entire two hour gathering, as the guests enjoyed a plate of chicken, coleslaw, and the traditional Jewish dish known as kugle.

Pariente believes these events are very important to the large population of Holocaust survivors that reside in Brooklyn. Many of them don’t have any remaining family members, and these social functions are there only chance at interacting with others.

“This is one of their main socializations, said Pariente. “They come out, they get dressed, the women put makeup, they put mascara, they put on the whole bit, because to them, it is an outing that they have been looking forward for the whole month.” 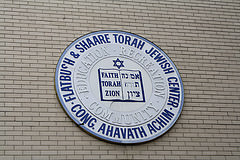 The emblem of the Jewish Center, with its core values written in both English and Hebrew. Photo Credit: Ben Shapiro

Sharona Herskovits is the supervisor of the Nazi Victim department that works out of Midwood, Brooklyn. Herskovits decided to get in to social work after taking the advice of a college guidance counselor who tried channeling her passion for psychology. Now, working for her 15th year at Self Help, not only does Herskovits love what she does, but she also has a personal tie to the organization she represents and its cause.

“I grew up with it, my grandparents were Holocaust survivors,” said Herskovits, who is in her 30’s. “They were both in Auschwitz,” she said.

As a granddaughter of Holocaust survivors, Herskovits has extra reason to care for this dwindling population. Her group aids these victims in several different ways, including housekeeping, case management, and the fulfillment of other daily needs, with the overall goal of keeping them comfortable in their own homes. Still, despite her department’s efforts, which help almost 1,000 people, Herskovits believes more needs to be done to support these survivors.

“I mean, you need a lot more funding because they are dying out, they are slowly deteriorating, or shall I say, not slowly but rapidly,” said Herskovits, a resident of Brooklyn. “Some of them are not in the financial area where they can afford care.”

For many of these survivors, no family is the main culprit for their financial woes. Some of them are reliant on reparation checks from the German Government that can come in as frequently as once a month. Although, 84-year-old Helen Weiss does not suffer from this problem, she still lives with her husband Jack, a fellow survivor, and the two of them have seven grandchildren. In fact, having a family is what helped Weiss escape Nazi Germany almost 80 years ago.

“I want a family. I don’t want to die,” Weiss remembered telling herself when she was just a 14-year-old girl thrown into Auschwitz.

Weiss explained that most of the survivors that met up yesterday afternoon are from Mukacheve, Ukraine. Some of them were even sent to the same concentration camps. Their background and hardships have bonded this group of survivors, forming a community that cherishes each chance they get to see one another.

“This is their family,” Weiss said speaking about her fellow survivors. “These meetings are very important to us.”