In Bustleton, a home away from home 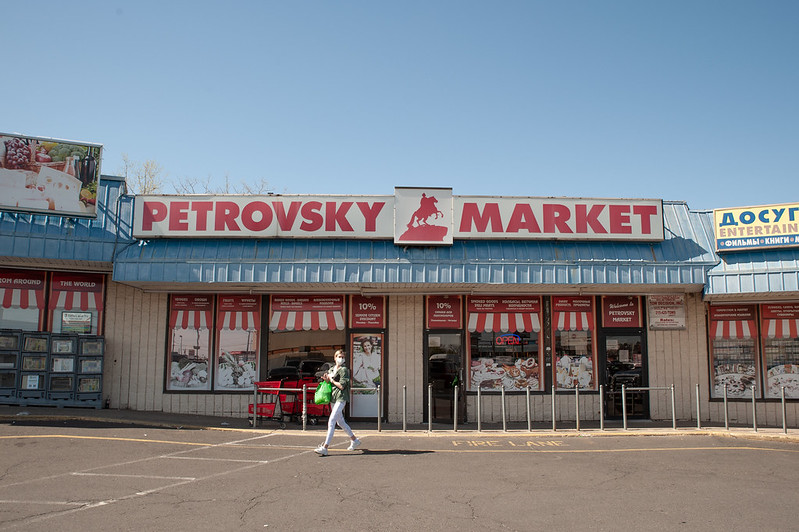 The Russian language is everywhere on Bustleton Avenue in Northeast Philadelphia. With Eastern European-style supermarkets and restaurants that sit in strip malls lining the busy, wide avenue, it’s even more common than encountering English.

Bustleton is a haven for post-Soviet descent. Homes in the quiet neighborhood are modest, with a suburban feel. Marina Lipkovskaya, a director of the New World Association, an organization that helps immigrants integrate into the U.S., said that the neighborhood feels safe for immigrants from Eastern Europe. Not only have the people here made a home away from home, but they also work to help those in post-Soviet countries. 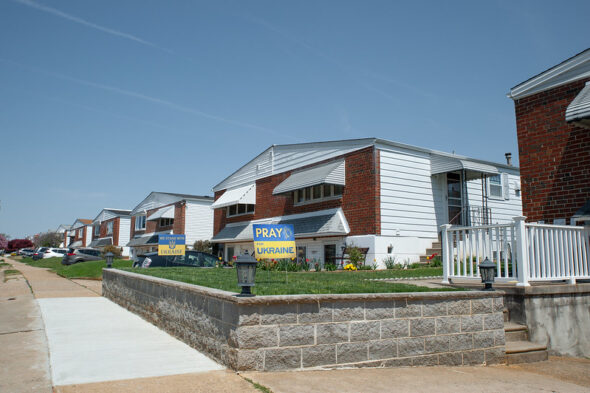 Now, during the war in Ukraine, many Bustleton residents and business owners are displaying not only their native country’s flags but also yellow-and-blue support signs for Ukraine.

“People here are ready to help,” said Lipkovskaya, while sitting in her office. Her Bustleton Avenue-based organization is currently collecting donations, including non-perishable food and clothes to send them to Ukraine.

Although providing international aid is not the core mission of the New World Association, the group was compelled to help when, on February 25, the day after the Russian invasion started, an American man came and put $100 on Lipkovskaya’s desk.

“We didn’t even think we would be doing this, but he said I would figure out what to do with the money,” she said. 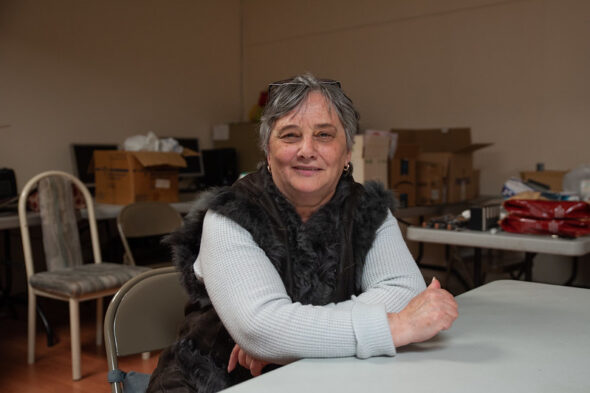 Marina Lipkovskaya, a director of New World Association, in of her classrooms in Bustleton, now filled with boxes of donations, that are meant to be sent to Ukraine. April 22, 2022. Photo by Nikol Mudrová 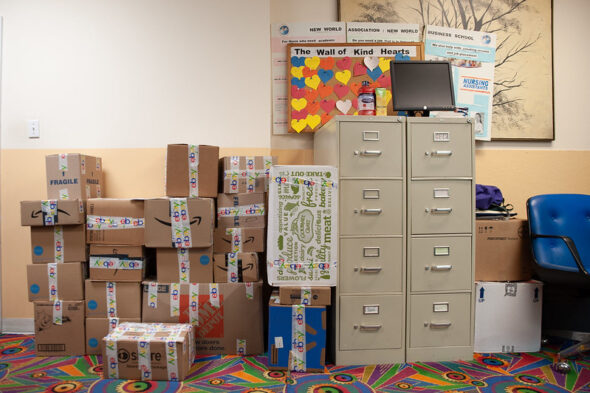 New World Association office filled with boxes with food and other necessities, that will be sent to Ukraine. April 22, 2022. Photo by Nikol Mudrová

Since then, more people have stopped by – some of them with Ukrainian roots, others just out of solidarity with the country. And boxes full of necessities are piling up.

The organization’s core mission is to help immigrants who arrive in Philadelphia integrate into their new home. New World has clients from 54 countries, including Belarus, Russia, Georgia, Kazakhstan, and Turkmenistan. About half of their clients, though, are from Ukraine (some came recently, fleeing the ongoing war).

Lipkovskaya herself left Kyiv, Ukraine, and moved to Philadelphia in 2003, so she knows what immigrants need the most – information and helps with their documents like visas, work authorizations, study records, or vaccinations. As the organization focuses mainly on education services such as English lessons or preparation for the citizenship test, Lipkovskaya considers health or financial literacy just as important.

“I say to our English teachers, please, don’t teach them how to use supermarkets. That’s easy. Instead, teach them how to use the language to pay taxes, get paychecks, or how insurance (in the US) works,” she said, summing up the activities of the New World Association as “civic education.”

To get clients familiar with US traditions, New World Organization staff celebrated US national holidays with their clients, too – with all the food that comes with it. As Lipkovskaya said, “Food unites people.” 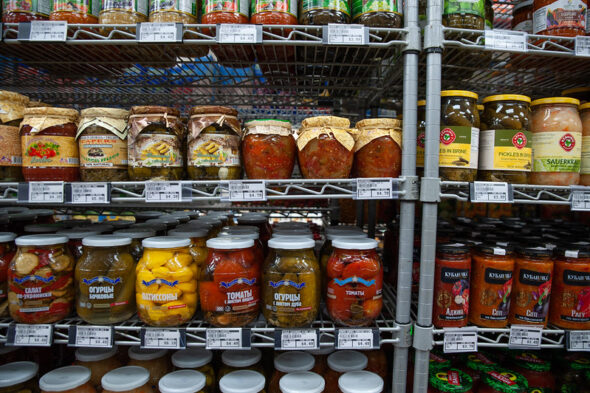 Pickled vegetables in Petrovsky Market on Bustleton Avenue in Philadelphia. Pickling became popular in Eastern European countries under Communist rule not only for its taste, but also for its shelf life – without access to foreign goods, it allowed people to avoid seasonal fluctations in marketplace by perserving local produce. April 22, 2022. Photo by Nikol Mudrová

In Bustleton, the Russian language, which most immigrants from former Soviet countries learned in school, also unites people. No matter which post-Soviet country they are coming from, most people know Russian.

“People (in Bustleton) feel more comfortable when doctors, people who fix their cars or serve them in stores and restaurants, understand their language,” said Lipkovskaya.

Many businesses in Bustleton are run by immigrants, so billboards and signs are often in Cyrillic. Just across the street from New World Organization offices is one of the small strip malls called Presidential Plaza. With its Uzbek restaurant and Petrovsky Market, a store with Eastern-European produce, the plaza is a melting pot for the community.

“Not good English,” said Zinoviy Tabin, a man in his 80s who immigrated to Philadelphia from Moscow 30 years ago. While holding a local Cyrillic paper that he picked up from one of the racks in front of the supermarket. Tabin explained that even after living in the United States for so long, he still struggles to learn the language. 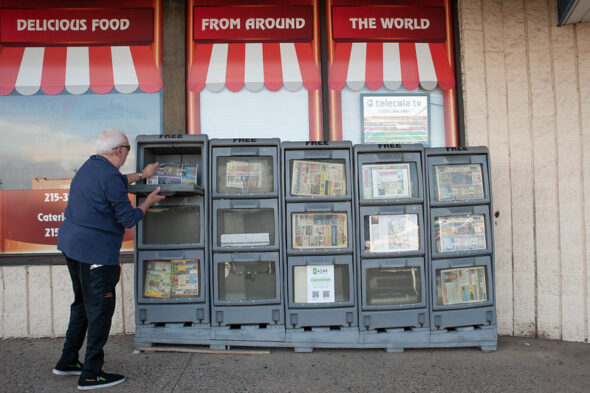 Zinoviy Tabin, an immigrant from Russia, picking up Friday’s local, in Cyrillic written, paper in front of the Petrovsky Market in Bustleton, Philadelphia. April 22, 2022. Photo by Nikol Mudrová

He doesn’t need to use English much, as most of his friends from the neighborhood are Russians or Ukrainians.

Abdurashid Ahmedov came to the US 20 years ago from Uzbekistan, and throughout the years, his other family members followed him.

“The food here is similar to Uzbek, so it feels like home,” he said while waving at his son Ravshan, who had just left Petrovsky Market with full bags in both of his hands. They went grocery shopping for a party that the Bustleton’s Uzbek community was holding.

“But sometimes, we hang out with Russians, Georgians, and others too,” Ahmedov said.

These communities usually get together in immigrant-owned restaurants or churches, said Ucha Dzidziguri, standing in the driveway of his half-brick, half-stone family home just a few blocks from Bustleton Avenue adorned with Georgian and American flags. He first moved to New York shortly after Russia invaded his home country Georgia in 2008 and then moved to Philadelphia. 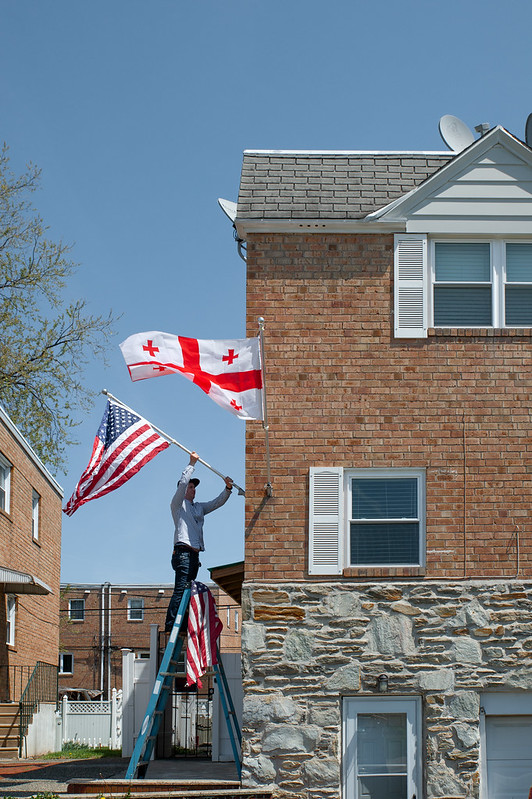 Ucha Dzidziguri, an immigrant from Georgia, hanging new American flag next to the Georgian one on a wall of his house in Bustleton, Philadelphia. April 24, 2022. Photo by Nikol Mudrová

The Georgian Bakery and Café in Leo Mall, which is famous for its canoe-shaped Georgian bread Shotis puri, is one of the popular gathering sites.

“They all come here to buy the bread, people love it,” said Sofia Samkharadze, an immigrant from Georgia who works in the bakery, as she was packing the bread and a chocolate cake for two Polish customers. 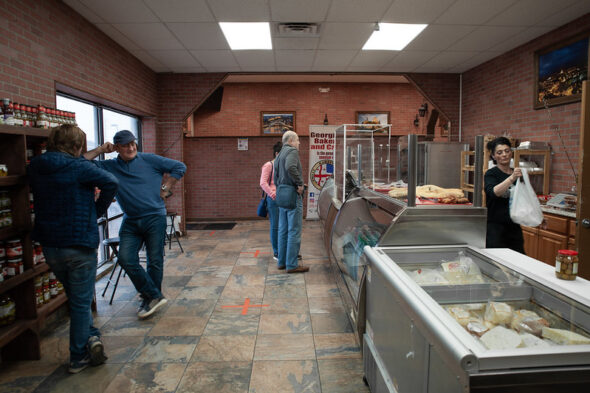 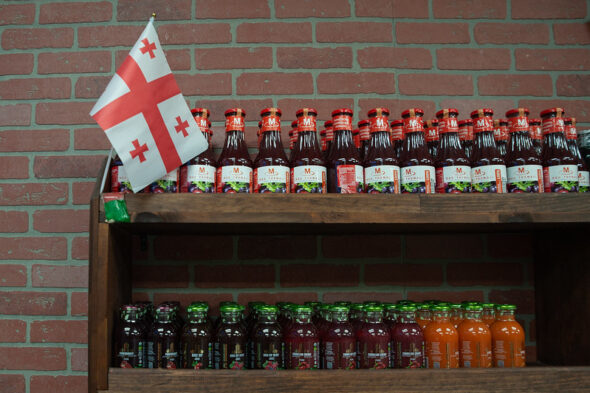 On a recent Sunday afternoon, some people gathered in a room above the main nave of the  Albanian SS Peter & Paul Orthodox Church to snack on leftovers from the Easter service the day before.

Albanians didn’t have their own church until they came to the United States, even liturgy used to be only in Greek. But the Albanian population in Philadelphia got smaller and the church decided to welcome all Orthodox Christians, said pastor Nicholas Dellermann, who also doesn’t have roots only in Albania, but also in Slovakia. So the church became yet another meeting place for local Slavs. 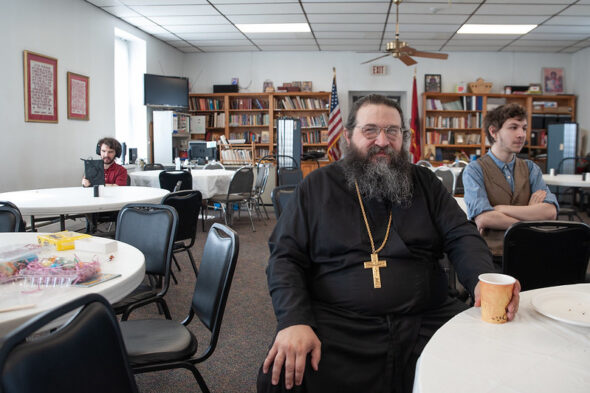 Immigrants choose this section of Northeast Philly to be surrounded by people with similar stories, said Lipkovskaya.

Supporting the unhoused in West Philadelphia