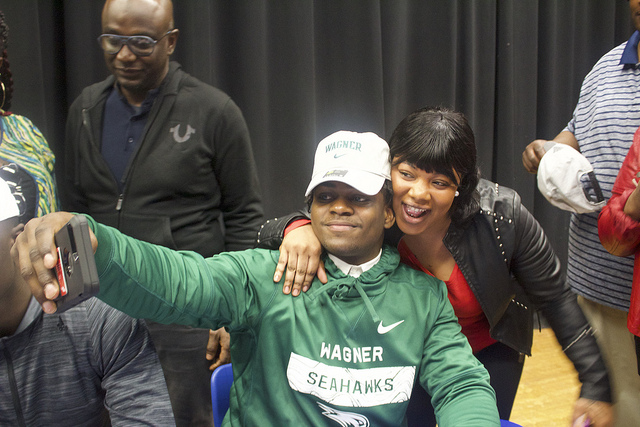 Irvington linebacker Nashawn Brooks poses with his mother after signing his letter of intent to Wagner College. Brooks is also an All- County wrestler and finished top three in his section. Photo by Chinedu Onyemaobi

As thousands of high school seniors signed their letter of intent on National Signing Day, Irvington High School stands out. While the public school is on the rise as a football powerhouse and is in one of the most competitive conferences in the state of New Jersey, their community has suffered from violence, crime and poverty.  The success of the program has been a much needed bright spot.

“We’re trying to change the narrative of what this city has been and the troubles that we’ve had in the past,” said Ashley Pierre, head football coach of the Irvington Blue Knights.

According to City-Data, Irvington’s crime rate was more than four times the national average, with 1,000 crimes occurring per 100,000 people for seven years straight. Though the crime rate did begin to decline in 2010, the rates are still high.

Coach Ashley Pierre, an Irvington native, played football at the University of Rhode Island and was an all-conference linebacker in 2007. When he was hired in 2015, he took over a team that was 3-7 overall and at the bottom of the Super Essex County conference. In his first season as head coach, he went 8-2 and had a top 50 finish in the state. 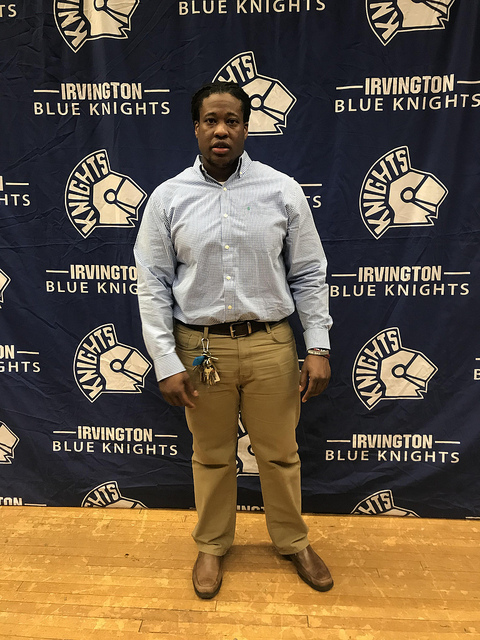 Irvington head coach Ashley “Rowdy” Pierre has been at the school since 2016. Since then he’s has a 24-9 record and has sent more than 12 athletes to division one schools. Photo by Chinedu Onyemaobi

“When I first took over this program, I tried to surround myself with men who cared and loved these kids,” said Pierre. “So we brought back some coaches from this city who have accomplished what we’re aiming at and that’s a championship.”

In a town where 25 percent of households live below the poverty line, the struggles at home can affect student-athletes both in the classroom and on the field. To combat these issues, Pierre has implemented a mandatory one hour study hall, weight lifting sessions, and  nutrition courses for his players. He also has a “Real World Wednesday”, where he brings guest speakers to mentor his players about the realities of life after football.

“What Rowdy [Coach Pierre] has done for our football program is truly special. There’s a different level of focus in our football players and it transcends beyond the classroom,” said Dr. John Taylor, Irvington’s Athletic Director.

Darren Fields, Irvington’s 6′2″ defensive back, will be playing at University at Albany State University of New next year and has played in Irvington township since his Pop Warner years. The start of the 2018 football season did not start off on the right foot, as Fields was sidelined with a fibula injury and missed the first eight games. Getting to this point in his life was not easy as he was faced with adversity early on his life.

“From the way I was raised, to be honest, I’m not supposed to be in the situation I am right now,” said Fields. “All I can do is be a great example to my brother and sister and show them the right path so they can be successful.”

Irvington High School had 12 student-athletes sign to division one schools in 2017. Most notable was  Lancine Turay, who is at the University of North Carolina Chapel Hill and is the brother of Indianapolis Colts linebacker Kemoko Turay. This year, Irvington has six student-athletes signing to division one schools. Coach Pierre believes this is just the beginning of Irvington’s success.

“Next year we should have around 10 guys sign. This is just the start of something special” said Pierre. “We’re going to be around for a long time. Just stay tuned.”