L train shutdown can be boom or doom for local businesses 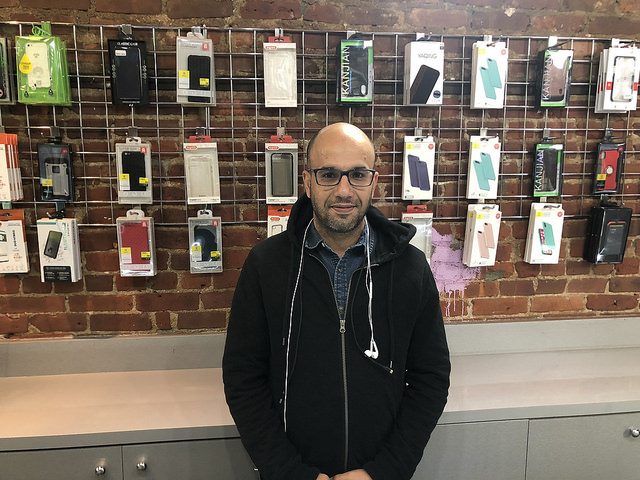 Mohammed Aldairi, the owner of a iTech Doc, a tech repair shop in Wiliamsburg says he is threatened by the L train shutdown. Photo by Sam Eagen

For Williamsburg, The L train has long been the lifeline to the hipsters who live and visit its chic boutiques, artsy cafes, trendy restaurants and cutting edge nightclubs. But a looming April shutdown may put a chokehold on area businesses and hurl them into an uncertain future.

“I’m at the mercy of whatever happens with the subway,” said Fabio Roberti, the owner of Earwax Records. “I’m hoping that people will be able to get here by shuttle buses or shuttle ferries, but whether that works or not remains to be seen.”

Roberti has been doing business in Williamsburg for 22 years. He said there is little he can do to prepare his business for the loss of the subway line.

The 15 month repair project is expected to make it significantly more difficult for commuters to make the trek there. In 2012, the line was damaged during Hurricane Sandy and the L has been plagued with delays ever since. These repairs should fix that damage, but could change Williamsburg.

Mohammed Aldairi, the owner of tech repair shop, iTech Doc, said it will force neighbors to stay in the area.

“It’s good for business when there is more walking traffic,” he said.

“I’m excited for them to fix it,” he said. “We suffer from delays on the L every day and it makes it very hard for tourists to visit.”

To alleviate commuting issues for the 225,000 daily riders, the MTA plans to increase service along the J,M,Z, and G subway lines and add busses. They will also be a dedicated bus lane over the Williamsburg Bridge and a new ferry route between North Williamsburg and Stuyvesant Cove.

Aldiari has faith in these solutions.

“I think it will work if they increase the ferries,”he said. “We live so close to the river, and that will mean less traffic on the other trains.

Wendy Chun is the owner of Think Closet, a small boutique on Bedford Avenue. She is hopeful that the MTA’s solution will be enough to keep people coming into Williamsburg.

“I think a lot of people will take advantage of those buses and trains,” said Chun. “I don’t think it will stop tourists from coming to shop in Williamsburg. If they want to come, they will come.”

Williamsburg has been growing rapidly since the mid 2000’s, and has become one of New York’s most expensive neighborhoods. Some business owners are hoping to see a rent drop as a result of the shutdown.

“We are hoping for a rent drop,” said Chun.

In spite of the threat of the shutdown, Aldairi doesnt think that the economic power of Williamsburg is going anywhere anytime soon.