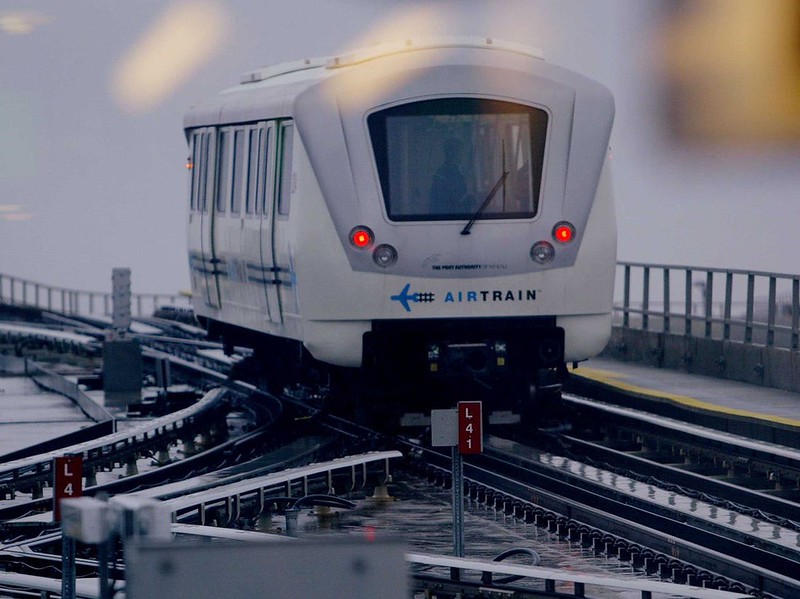 A new Air Train at LaGuardia Airport would connect the MTA and LIRR trains to the airport creating a faster, smoother commute for travelers. Photo by:Getty/Spencer Platt

“AirTrain LaGuardia will have an immediate impact on our city by creating 3,000 construction jobs and opportunities for minority and women led business,” Thomas Grech, president and CEO of the Queens Chamber of Commerce, said at a public hearing  yesterday. . “As business leaders, we recognize the critical role infrastructure projects serve in reviving an economy. We believe it will be a catalyst for growth in the 21st century.”

The Air Train project would decrease traffic around LaGuardia (LGA) by connecting the MTA and LIRR trains to the airport directly. Upon completion, it would take 30 minutes to reach LGA from Manhattan, a trip that 90% of travelers make by car which ranges from 35-80 mins depending on the day. While many see the Air Train as a great solution, others disagree.

“This project is the most wrong-headed transit project in the history of New York City. It takes people east past the airport and requires them to double back to the airport,” James Carriero, a member of the Ditmars Boulevard Block Association, said at the hearing.

“This project is really for a $2.5 billion employee parking lot which we just learned today is to [move] 1000 parking spaces off airport [to] Willets Point,” Carriero said.

The construction could interfere with an ongoing environmental remediation and a community redevelopment project to revive Willets Point by building new affordable living. The area, built on wetlands, was a massive landfill for toxic waste in the 1900-1930s. The area later became known as the “Iron Triangle” and was home to many auto-body shops which caused additional toxins to leak into the ground. Any construction that takes place before the crucial environmental remediation will release toxins, creating a health hazard. Additionally, the construction doesn’t take any private property by eminent domain, but will take public park space and requires rezoning. Locals don’t think labor unions are taking this into consideration. 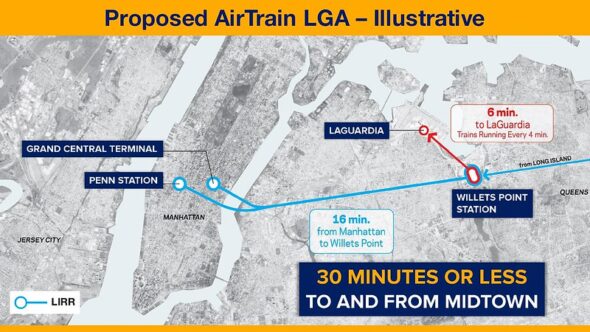 If approved by the Federal Aviation Association, the construction of the train will impact local Queens residents. Graphic from: A Whole New LaGuardia website

“I also appreciate the deep expertise of organizations like Regional Plan Association and the great value of the workers represented by General Contractors Association, but I agree with my neighbors here in Queens, that those voices should not carry as much weight as the local communities that will be affected by the current proposed plan,” community member Margaret Flanagan said at the hearing.

Another road bump in the project, which was first proposed by Governor Cuomo in 2015, is a $2 billion deficit in the Port Authority’s budget as a result of decreased travelling during the Covid-19 shutdown. In order for the construction to take place, the state will need federal additional funding. The $2 billion of federal funding that would be allocated to the AirTrain project would be in direct conflict with desperate health and transportation budget shortfalls in the region.

“If you’re talking about infrastructure, the M.T.A budget shortfall is much more severe,” James Mongeluzo an East Elmhurst resident, said. “Bailing out the MTA would be a much bigger priority than bailing out the Port Authority’s capital plans,”

Another pressing issue in Queens is access to health care. The area most affected by lack of access is also the same area that’s most affected by the LGA AirTrain construction, East Elmhurst, Elmhurst, and Corona. This part of Queens was the epicenter of the pandemic in March and April because of the high concentration of essential service workers and people of color, all of whom are more susceptible to the virus.

The prevalence of the virus in the area overwhelmed hospitals because of the startlingly low ratio of hospital beds per capita in the area. With only 1.44 hospital beds per 1,000 people, Queens has the lowest hospitable beds per population of any borough. For comparison, Manhattan has 5.34 beds per 1,000 people. Many locals think that health access and other public services are a much larger priority than the LGA AirTrain project, especially in the context of the Covid pandemic.