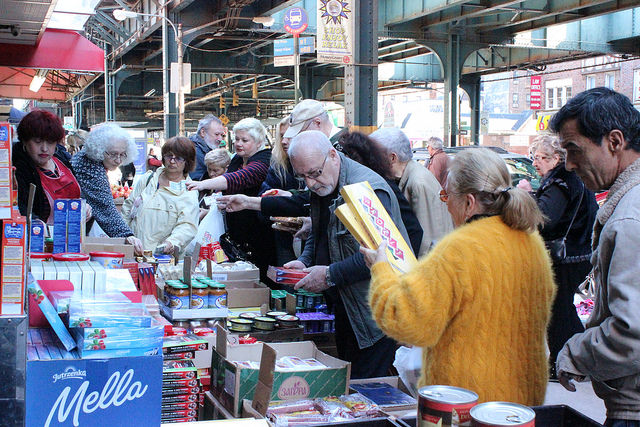 Customers convene around a stand selling Russian produce along Brighton Beach Avenue. On Nov. 4 residents of Brighton Beach, New York, will be called to decide who will be their next representative in the 45th District of the New York State Assembly. Photo by Ilaria Parogni

In the 45th District of the New York State Assembly, Russian votes are a hot commodity.

This is, after all, the heart of Brighton Beach, that little corner of New York that is all borscht and matryoshka dolls, where one is more likely to hear “nyet” than “no” and “privyet” than “hello.” It is here that Steven Cymbrowitz, lower house representative for the district since 2000, will face the Russian American Ben Akselrod in the Nov. 4 elections.

Under these circumstances, transcending language barriers becomes essential – both for the voters and for the politicians. This might explain why Cymbrowitz is simultaneously engaged in what he defines as an “ongoing battle” with the New York State Board of Elections, which has consistently opposed his campaign to translate voting materials into Russian due to the financial cost it would entail.

Ensuring that elections are accessible to Russian speakers, however, is crucial in Cymbrowitz’s district, which comprises some of the neighborhoods with the highest concentration of Russian-speaking immigrants in the country, from Brighton Beach to Sheepshead Bay. “What we want to do is getting as many people to vote as possible. If language makes it easier for them to partake in the American system of voting, then we should do everything we can. We should encourage people to vote,” the assemblyman says.

The American Community Survey (ACS) estimates that 83,249 people born in Russia resided in New York State in 2013. Among them, 62,021 held U.S. citizenship. Russian is the fourth most spoken language in the state, after English, Spanish and Chinese. Yet, more than half of the Russian population cannot be considered fluent in English.

Under federal law, this is not enough for Russian speakers to obtain language support during election time. According to Section 203 of the Voting Rights Act of 1965, minority language assistance, from translated ballots to on-site interpreters, is provided in accordance with the determinations of the U.S. Census Bureau. In 2011, the bureau identified Spanish, Korean, Chinese and Bengali as the four groups qualifying for assistance for the state of New York. Yet, naturalized Koreans are fewer than Russians with U.S. citizenship and are more likely to be proficient in English, according to the ACS.

If the integration of the Russian community into the electoral process is truly the aim of Cymbrowitz’s campaign, he seems to be in tune with the most politically and socially active Russian Americans in New York. Having taken to heart the objective of increasing engagement among their highly insulated community, various organizations and people work daily to overcome the language barriers.

Russian-language radio channels, such as Davidzon Radio, keep the Russian American community informed with political analysis programs, while civic engagement seminars and English language classes are offered by organizations such as Shore Front Y, a Jewish community center with a significant Russian component. Their efforts might just be paying off: In talking with numerous Russian speakers in the district, not a single one expressed unease at taking part in the electoral process due to language difficulties.

Nevertheless, Cymbrowitz has turned the language access issue into a significant part of his political agenda. In 2012, he supported a bill that would have required the city of New York to translate into Russian “all information that is provided […] in English about the electoral process,” including ballots and registration documents. Governor Andrew M. Cuomo later vetoed the bill on the recommendation of the general counsel of the Board of Elections in the City of New York, Steven H. Richman, who opposed the measure citing financial difficulties.

“We thought that this would be the beginning of translating all the documents into Russian, but the New York City Board of Elections said that (it) didn’t have money to do the translation,” Cymbrowitz recalls. The bill was an expansion of a 2009 measure, also sponsored by the assemblyman, which was signed into law by Governor David Paterson and which mandated the provision of electoral information online and in print.

Cymbrowitz is not alone in calling for ballots and registration forms to be made available in Russian. In March 2013, Bill de Blasio, now New York’s mayor, urged Frederic M. Umane, president of the New York City Board of Elections executive office, to prioritize the translating of ballots, signs and other materials in Brooklyn into the language. “Failing to provide this growing population with voting materials in Russian has the potential to disenfranchise thousands of voters,” he wrote in a letter to Umane.

Vladimir Epshteyn, president of the Russian-American Voters Educational League, has joined the campaign for passage of the 2012 bill. “Every year we are asking… we are demanding the assembly and the state senate to allocate money to implement the decision,” he says.

Epshteyn has been involved in civic initiatives in New York since 1997. Every year he and a team of volunteers translate electoral materials into Russian.

Similarly, Dmitri Glinski, president of the Russian-Speaking Community Council of Manhattan & the Bronx, testified in August in front of the New York City Campaign Finance Board’s Voter Assistance Advisory Committee. He asked the board to apply the provisions envisioned in the 2012 bill and described the language barrier as “the biggest challenge to Russian speakers’ voter participation.”

Consideration of the elderly often is at the center of this advocacy. For many immigrants from the former Soviet Union, the English-language proficiency requirement for citizenship was waived under medical and age exemptions. Others passed the test, but, having settled in a heavily Russian-speaking district, they rarely had the chance to practice their English.

“Most of these things we are trying to do as per language are for our seniors,” Cymbrowitz says.

Walking around the district, however, one might get a different impression. Ivetta Popechenko, a Russian-speaking senior citizen, says she will absolutely take part in the elections. Does she speak English? “Not at all,” she says. “If I don’t understand something, I have children who speak perfectly, and they will help me.”

Sofia Goroshek, a retiree from Moldova who has lived in New York for the past 22 years, says that the language of the voting materials “basically doesn’t matter.”

Politicians often find alternative ways to reach out to the community. Some hire campaign staff keeping in mind the Russian constituency. Cymbrowitz boasts full-time Russian-speaking staff, while also sending out all of his campaign literature and newsletters in both Russian and English.

Elections may be competitive, but politicians and activists seem to have found common ground in their attempt to accommodate the Russian-speaking voters, ensuring they can vote while remaining comfortably inside their Russian bubble. Occasionally, however, someone will venture outside the bubble.

Moldovan-born Alexander Daich, 88, takes pride in having voted in elections ever since becoming a U.S. citizen more than 20 years ago. To keep informed, he reads the New York Post. “Truth to be told, I am an American retiree.”