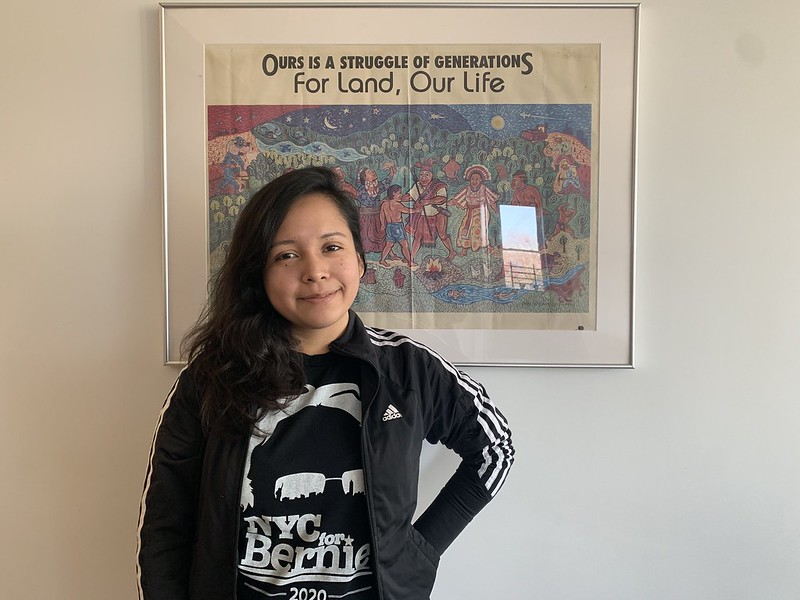 Virginia Baez, 31, co-founded Queens Latinos for Bernie to encourage Latinos in her borough to vote for the Vermont Senator. Photo by Amanda Pérez Pintado

On a sunny Sunday afternoon, Virginia Baez-Ponce sat with her laptop and cellphone at hand on a white cushioned chair in an apartment in Jackson Heights, Queens. Baez’s long black hair cascaded over her shoulder as she looked over the guidelines to phonebank for Bernie Sanders. Her unzipped black athletic jacket revealed an “NYC for Bernie 2020” shirt, leaving no room for doubt on who her candidate is.

For Baez-Ponce, 31, Sanders’s upbringing and his stances on issues like immigration and healthcare resonate on a personal level. She immigrated from Peru with her family on a travel visa in 2001, and was undocumented for several years.

My name is Virginia Baez-Ponce. I’m 31, and I live in Jackson Heights. I’ve seen what Trump has done to this country. And, and I think that it is very important to stop this man from running this country for the next four years. Do I think Biden is the best option? Or the best candidate? Definitely not. I think that when people argue the Bernie’s too old and they’re willing to support Biden, who, whose age is very close to him, I’m just like, kind of like, whoa, like, that just doesn’t make sense. There’s a lot of policies that Biden has kind of rolled out and like how like problematic some of the things in the past that he has done are that, honestly, I don’t think he’s, he’s the best candidate. But if it comes down to Biden and Trump, I will definitely vote for Biden.

Baez-Ponce could not vote for Sanders in the 2016 Democratic primaries because she was a green card holder. But horrified by President Donald Trump’s win, she became a U.S. citizen in 2017 to be able to vote. She said Sanders has what it takes to beat Trump.

“This is the person that has been fighting for many rights for different people since before it was cool,” said Baez-Ponce. “I’m very confident that if Bernie wins the Democratic nomination he would actually beat Trump and presidential elections.”

Tío Bernie (Uncle Bernie), as Hispanic supporters nicknamed Sanders, has won big among Latinos acrossin the early primaries. In Nevada, he garnered support from 53 percent of Latino voters, three times as much as former Vice President Joe Biden. The Vermont Senator won California, the biggest prize on Super Tuesday, with 49 percent of the Latino vote. Sanders is currently locked in a tight race for the nomination that will depend heavily on which candidate builds the strongest coalition. 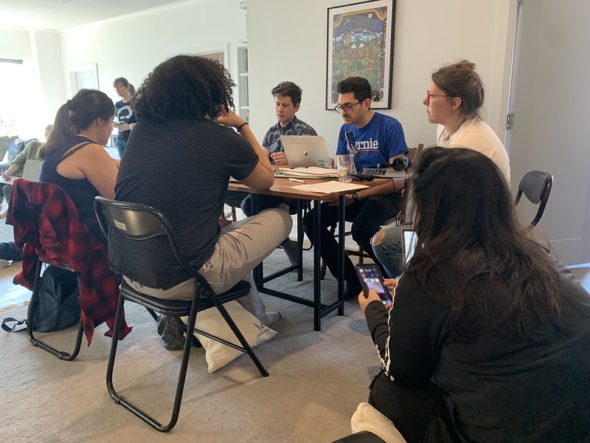 A group of about a dozen people meet on a Sunday in a Jackson Heights apartment to phonebank for Bernie Sanders. Photo by Amanda Pérez Pintado

If Sanders wins the nomination, he will need the support of Latino voters like Baez to reach the White House.

For the first time, Latinos are expected to be the largest racial or ethnic minority in a U.S. presidential election, according to Pew Research Center. A record 32 million Latinos are projected to be eligible to vote in 2020, just over 13% of all eligible voters.

Michael Jones-Correa, a political science professor at the University of Pennsylvania, said he is not surprised by Latino voters’ support for Sanders. The senator’s progressive economic platform and Medicare for All proposal, said Jones-Correa, appeal to Latinos.

“Latinos tend to be more likely to lack health insurance than other Americans,” said Jones-Correa, director of the Center for the Study of Ethnicity, Race and Immigration. “It makes it a higher priority for them.”

Many Latinos, he said, choose Sanders over Biden because they associate the former vice president with Barack Obama’s administration, which deported about 3 million people from the U.S.

“A lot of them look at Biden as vice president of an administration that was not entirely fair to Latino immigrants,” said Jones-Correa. “Deportation was highest in the Obama administration. That history still sticks with Latino voters.”

Sanders, 78, is particularly well liked by younger voters, said Jones-Correa. Latinos are among the youngest racial or ethnic groups in the U.S., with a median age of 30 in 2008.

Jones-Correa attributed his popularity among young people to his criticism of the party and problems in the country, as well as his consistency in issues like health and inequality.

Jones-Correa said Sanders’s biggest challenge is getting his younger supporters to the voting booths. Younger voters, he said, do not turnout as much as older voters. But he said Sanders’s campaign has the most effective outreach to Latinos and infrastructure that resembles the community “much more than any candidate.”

“As Latinos, I really feel like it’s our election. I’m sick and tired of feeling like a second-class citizen. This is why this is our moment in history right now. We have a second chance to use our voices… to support Bernie Sanders’ message.” –@itselivazquez pic.twitter.com/Q2NuVC6c1D

Sitting on a couch at a bar in Meserole Street, Brooklyn, Ricardo Aca, member of Make the Road Action, watched the Super Tuesday results through a giant television screen as people chatted around him. Two weeks before, Aca traveled to Nevada to knock on doors and mobilize Latino voters along with other members of the immigrants rights group, which endorsed Sanders.

Aca said the group supports the senator because he has “the strongest platform for immigration” and “a pathway to citizenship.”  Sanders’s immigration policy includes reinstating and expanding the Deferred Action for Childhood Arrivals program, breaking up Immigration and Customs Enforcement and Customs and Border Protection, and instituting a moratorium on all deportations.

“We see someone that has consistently been supporting black and brown communities, has stood with our movements,” said Aca. “He believes in the power of organizing and drafting legislation.”

As a DACA recipient, Aca cannot vote. But he hopes Sanders will reach the Oval Office and implement his immigration reform.