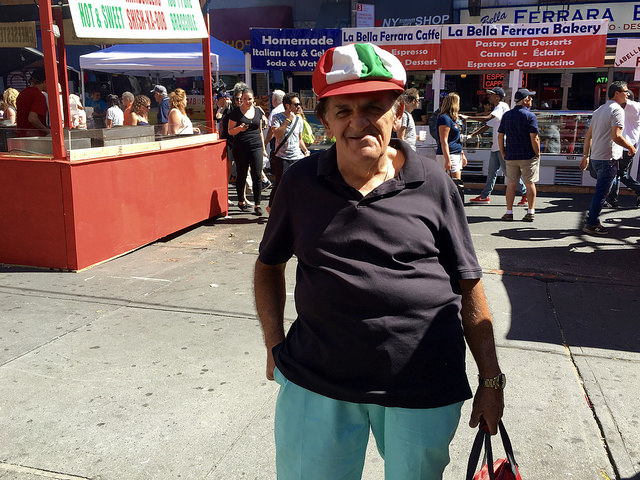 Al Vecchione, 70, of Howard Beach, has been visiting the San Gennaro Feast for over 50 years. By Jennifer Cohen

Al Vecchione, 70, stood in front of the Most Precious Blood Church on Mulberry Street in front of the statue of San Gennaro yesterday, with a red, white, and green hat on his head the colors of the Italian flag. The sweet smell of sausages and peppers filled the air, tourists munched on cannoli’s and zeppoli’s, and vendors squawked at you to try their menu. Vecchione was at his beloved Feast of San Gennaro in Little Italy. He soaked it all in and he remembered his roots. The festival means the world to him, he said.

“My ancestors, my grandmother and grandfather, when they came from Italy this is where they settled,” said Vecchione of Howard Beach, Queens. He has attended the feast for 50 years. “They came to Ellis Island and they settled here for a couple years until they moved to other areas.”

For 11 days the Feast of San Gennaro takes over the small Little Italy neighborhood that borders Soho, Tribeca, The Lower East Side and Chinatown. For 90 years Italian Americans have used the feast to celebrate their culture and food, but Little Italy is not the same haven for Italians as it used to be. In fact, Little Italy has shrunk to just three blocks of mostly restaurants.

“Little Italy used to run from Worth Street to Houston Street,” said Dominic Conata, 35 of the South Street Seaport area. “My family is originally from Little Italy, but eventually they raised the rents over here. Old Italians sold their buildings and new landlords took over and jacked up the price. It all became about the money, it’s a shame.”

Conata, was, working at the Café Napoli booth for the feast on the corner of Hester and Mulberry Street selling meatballs, pasta, and risotto balls.

Some Little Italy stores have Chinese vendors selling ‘I Love New York’ shirts, and there is even an Asian Italian restaurant around the corner, Conata said. And Little Italy is not the only place to get good Italian food.

“Chinatown is expanding and Little Italy is shrinking, it’s just a fact,” said Conata as he scooped three meatballs into a to-go container.

But some Italians cling to the Italian flavor of the tiny neighborhood.

“It’s not 100% Italian, but it still has the Italian feeling and Italian flavor,” said Dr. Joseph Sheltzer, President and Founder of the Italian American Museum.

Like many of the city’s Italian Americans, Sheltzer has ties to Little Italy as his grandparents lived in the area and then moved. Sheltzer believes that the Italians living in the area didn’t just move because rents got too high, but because they got successful.

“They moved to better living conditions, better opportunities, and better schooling,” said Sheltzer, of Westchester County. “Very few Italians live in the area from the few families that migrated here in the 1880’s.”

But for the Italian feast goer’s this celebration is the only thing keeping tradition alive in the shrinking area.

The area “it’s shrinking a lot, I’m sad,” said Dawn Tampo, of Long Island. “This feast was very very different even 10 years ago, it was much bigger and more crowded and people really embraced it more.”