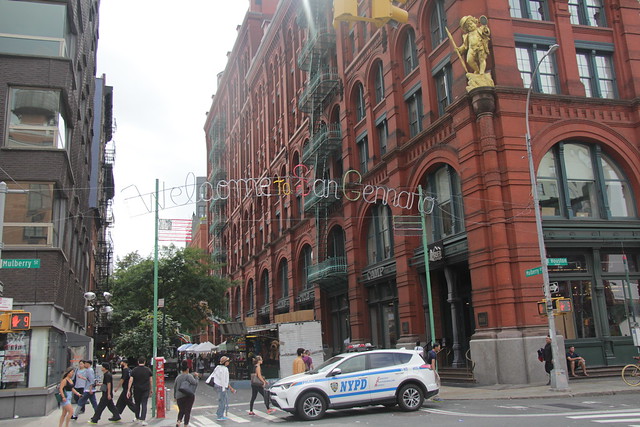 The entrance to Feast of San Gennaro on Mulberry Street and East Houston. Photo by Sydney Fishman

Ernie Pipoli, owner of Italian food vendor Pip’s Pit at the 93rd Annual Feast of San Gennaro in Little Italy, is worried about his family business. Pipoli can’t find anyone in his family to learn the recipes.

“Now my own brother doesn’t want to take it over from me,”Pipoli said yesterday. “Kids these days don’t want to work hard and this is hard work.”

Pipoli grew up on Houston Street and learned the business at a young age.

“Years ago, growing up around here, I worked for my uncle, that’s the way it was,” he said.  “I was with my family and my friend Danny, who makes zeppoles, worked with his family.”

The generations of families that have been the foundation of the neighborhood is thinning. At one time it was the largest Italian neighborhood in the city and now only a few blocks remain.  Many of the Italian families that lived in  Little Italy have moved away. High rents have also been factor.

Ernie Pipoli’s cousin, Vita Pipoli, works at the festival for Pip’s Pit. She said she doesn’t know any young person that will continue the family business.

“This festival is a big undertaking and it’s 10 days, besides setting up and all,” said Vita Pipoli. “It’s a lot. You need to be committed to this.”

She said that there aren’t many young people who will take over their parents’ traditions anymore.

“They have jobs of their own,” she said. “Many of the Italian vendors, whose children have outside interests and outside jobs, find it difficult. A lot of these vendors do this because it’s their means of making a living, not everybody does that. This is not easy work.”

To Flavio Rodriguez, this festival is hard work as well. He doesn’t believe that his children will help with his homemade cigar business. 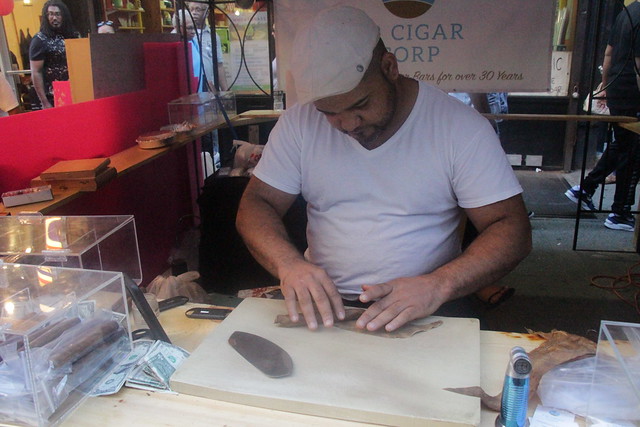 Flavio Rodriguez uses tobacco leaves, and a natural glue, to create his homemade cigars. He has been producing them for 24 years. Photo by Sydney Fishman

Rodriguez, of Long Island, has been a vendor at the Feast of San Gennaro for 15 years. He immigrated to New York from the Dominican Republic with his father and has been making cigars since he was 16 years old.

He wants to continue his business, but he knows it will be difficult for his children to make a living making cigars. He doesn’t make much money from the festival.

“I grew up in the Dominican Republic and my family has tobacco farms in the D.R.,” he said. “You know Fuente Cigars? It’s a huge cigar company. They used to teach us how to make cigars. We worked on the farm and sold the tobacco to those big companies. Then I moved up here with my father and I am still making cigars.”

Rodriguez likes his job, but he wants his kids to pursue what they want to do instead. To him, making cigars is a way to keep his culture alive. It’s a legacy he wants to continue.

“I will carry on the tradition,” said Rodriguez. “My kids can do whatever they want. But I want them to go to college, and get a career. For me, I have to do it. Sometimes we lose money, but this is like advertising for our family,” he said.

Then he glued together tobacco leaves, filled them, rolled them into cigars and sold them to the crowd.