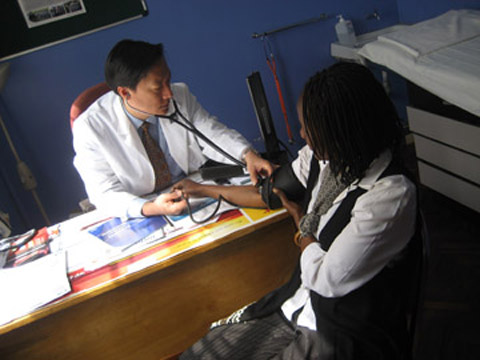 Michael Chung, an acting instructor in the Department of Allergy & Infectious Diseases at University of Washington, has lived in Kenya for the last six years doing work through the Center for AIDS Research.

Dr. Stephen Brown was living in Philadelphia when his friends began to die.

Brown, the director of clinical research at the AIDS Research Alliance (ARA) in California, knew then that he wanted to join the fight.

“I ended up taking a research fellowship at the University of California in San Diego, in the HIV Neurobehavioral Research Center,” he said. “I basically lost almost all of my cohorts and I decided I wanted to do what I could to start attacking this disease.”

Brown is one of hundreds of researchers studying AIDS in the United States. And for many of these scientists, doctors and lab technicians, the work is personal.

AIDS is a medical condition resulting from the progression of HIV. Simply put, it knocks out the body’s immune system, leaving it vulnerable to a variety of infections. Once-exotic diseases or otherwise harmless bacteria became life threatening. Death used to be assumed. But the rules have changed, thanks in large part to antiretroviral drug therapies. These drugs — often taken in “cocktails” of three or more medications (known as HAART, highly active antiretroviral therapy), significantly reduce the amount of HIV cells in the body.

As the course of the disease has changed, so has the research. Brown used to conduct clinical trials involving dementia, which was a big issue for people with HIV/AIDS prior to antiretroviral therapy. He now studies medical interventions to treat, prevent and eventually cure AIDS. Founded in 1989 by a group of physicians in Los Angeles, ARA is about sharing efforts and information for a more efficient process. In the beginning, Brown recalled, they considered everything from shark cartilage to garlic extracts.

The group is now working on a drug called prostratin, used in traditional Samoan herbal medicine for the treatment of yellow fever. This plant extract may help attack “viral reservoirs” in HIV-positive patients who are being treated with antiretroviral drugs.

“There’s a pool of cells that remain infected,” Brown said. “So the idea is how do you try to get at these infected cells, this reservoir.”

Though the medical research is exciting, what really makes a difference for Brown is putting his research into practice. He once treated a patient with neuropathy, a painful condition affecting some HIV-positive patients that causes a burning sensation in the hands and feet. The man had to wear flip-flops because he was in so much pain. But after treatment, he returned to the doctors wearing his cowboy boots, which he hadn’t been able to do for years. For others, treatment has literally pulled them from the brink of death.

“We had a patient who’d been on his deathbed for a really, really long time,” Brown said. “We were doing a study for Merck of an integrase inhibitor, which is a new kind of antiretroviral. For the first time in 10 years, this person went undetectable. He was able to work out again, his energy level came up.”

But for every success story, there are frustrating losses.

“There’s people who just missed it by a year or two,” Brown said. “One of my best friends ended up dying in 2002. He needed the next set of new medications and he just didn’t live long enough to see this new round of medications come out.”

Though the vaccine study that ARA conducted nearly two years was unsuccessful, a vaccine isn’t out of the question. And like the vaccine for cervical cancer, it may be administered as a matter of course.

“I anticipate it would be the kind of thing you would give adolescents before they become sexually active,” Brown said. “There’s some people that feel you’re sending the wrong message to children, but I think should a vaccine like this come out and it worked effectively, most physicians or researchers would make sure their kids got it.”

But the benefit of such advances comes to developed countries first. Dr. Titilayo Abiona, director of research at the HIV/AIDS Research and Policy Institute at Chicago State University, has seen the disease in the U.S. and Nigeria. She knows firsthand how profoundly HIV-positive patients are affected by treatment and testing.

“Here in the U.S., treatment is available to anybody,” she said. “If you test positive, you can access treatment. In Nigeria, it wasn’t like that. When I left in 2006, there were a lot of people who knew their status who couldn’t get care.”

Abiona said many people can barely afford the necessities of life, much less medications. She once raised money so a patient could receive HIV treatment, but the woman spent the money on food and other basics instead.

Abiona said that free HIV testing in the U.S. also encourages more people to learn their status. When she was in Nigeria, testing was limited and it cost the patient money. Many people figured that if they had to pay for a test, and then discover they had a disease they couldn’t get treatment for, then why bother knowing?

“There’s a lot of denial about HIV and, of course, the stigma is rife,” she said. “And there’s stigma here too.”

She also said there may be a connection between HIV infection rates and religion in the Nigerian population — a phenomenon that requires further exploration.

“When I was doing HIV testing for pregnant women in two communities in Nigeria, one was a predominantly Muslim community, and I didn’t get one single case of HIV there,” she said. “In the other area, where they are more Christian and more liberal — yes, there were cases there.”

U.S. research organizations are sharing information here and abroad in a way that was sorely lacking when the disease first emerged. Michael Chung, an acting instructor in the Department of Allergy & Infectious Diseases at University of Washington, has lived in Kenya for the last six years doing work through the Center for AIDS Research (CFAR), which partners with the university. For the doctor, this is an ideal situation.
“The large majority of people who are affected are in poorer countries,” he said, “I wanted to do research that would have an impact on people in these countries and would allow me to practice medicine as well as do research.”

After practicing medicine in refugee camps, Chung knew he wanted to help people in resource-limited settings. His work in Kenya, so desperately needed, also answers important questions about treatment for patients in the United States.

“For example, starting out doing programmatic work in terms of setting up an HIV clinic in Kenya answered questions like: How do we keep people on medications for a long period of time,” he said. “I was able to ask better questions or more relevant questions, rather than ivory tower questions that were academically interesting but wouldn’t have any impact on the ground.”

As more people survive with HIV, a new cluster of symptoms and complications arise. Chung has studied behavioral interventions to enhance medications, in addition to implementing cervical cancer screening among HIV-positive women. Because many people no longer die of AIDS, Chung said the next big killer among women infected with HIV could be cervical cancer.

The clinic Chung helped establish in Kenya began with one woman, Grace, an HIV-infected woman who worked with Chung when he first arrived in 2002. It was obvious that she was dying of AIDS. She had skin cancer, fevers and other complications that kept her from work. Chung got $1,000 — enough money to treat her for a year. Grace’s 9-year-old daughter was also infected, and she wanted the treatment for her. With the help of additional funding, both mother and child are healthy and continuing their lives. Chung said this is a common problem for cash-strapped Kenyans who are dealing with multiple infected family members.

Based on this success, Chung received more funding and eventually set up the Coptic Hope Center for Infectious Diseases in collaboration with the Coptic Hospital. The clinic has seen over 8,000 patients and placed more than 4,000 people on antiretroviral medication.

“Just from treating Grace, this has turned into this huge treatment center that is really helping thousands of people,” Chung said.

But with so many patients, people sometimes disappear and are never heard from again. That’s what happened to Rosabella, a patient whose children both died of AIDS. She eventually stopped coming to the clinic, and Chung thinks she is probably dead, as well.

The idea that a person infected with HIV can now live a long and relatively normal life is inconceivable to people both in the U.S. and overseas. Chung said it’s one of the biggest misconceptions he has encountered. When a patient who had lived on antiretroviral medication for over a decade spoke to a group of Kenyans, Chung recalled that it sent a shock through the crowd. After so much death, they were amazed that HIV/AIDS could be treatable.

“There’s a lot of people who feel that HIV is a death sentence,” he said. “But the reality is that so many people have survived for so long on antiretroviral therapy that we can treat it as a chronic disease now, like diabetes or hypertension.”

In the U.S., Chung has seen a shift in cultural misconceptions about treating populations in poor countries. He remembered when he first began in 2002, there was a feeling among many American HIV experts that building up drug resistance would be a problem for people who couldn’t tell time and take their medications consistently. But this has not been an issue.

“It’s been a paradigm shift for people,” he said. “They’re not just saying, ‘We should prevent HIV,’ which is true, but also seeing that these lives should not be lost either.”