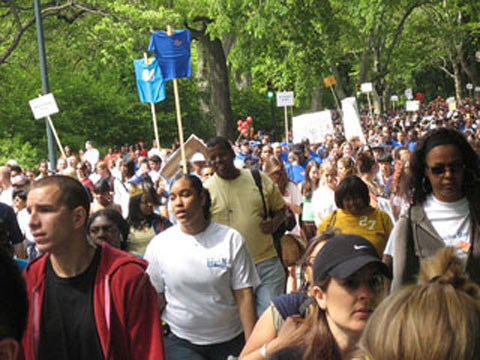 The AIDS Walk in New York is one way local non-profits raise money to fight AIDS and help those who are living with it. photo by Claire H. Unfourth

As the winter season advances, Ruben Salvador Carrasquillo Jr., and other volunteers at the Gay Men’s Health Crisis (GMHC), are preparing for a campaign to promote safe sex and HIV prevention during the holidays.

“We want to end the year on a positive note,” said Carrasquillo. “But we don’t want to go into the new year positive.”

The only problem is, the GMHC and other non-profit organizations that provide services and support to people living with HIV/AIDS, will also be going in to the new year with significantly less resources and funding, as a result of the current economic crisis that is gripping the entire nation.

The economic downturn, which has pitted Wall Street against Main Street, is once again taking its greatest toll on one of the most vulnerable sectors of society: non-profit HIV/AIDS organizations and the people they serve.

According to the Centers for Disease Control and Prevention, there are approximately 1.1 million people living with HIV in the United States today. The HIV/AIDS epidemic, which first attacked members of the gay community in the 1980s is far from over. In fact, today in the U.S., young people aged 13 to 35, and women over the age of 35 are the fastest growing populations of those becoming infected with HIV. Many of these people rely on various non-profit organizations for support, information, and services throughout treatment. In the face of the current economic crisis, many non-profits say they are facing difficult decisions on which programs to cut, and how to remain effective in spite of diminishing resources.

“At this point, it’s difficult to imagine that we won’t have to cut programs,” said Adam Tenner, Executive Director of Metro TeenAIDS, a community health organization that provides HIV/AIDS treatment and education to young people in Washington, D.C. “When we think about cutting programs, it’s as if people have asked you to choose which of your children they can beat.”

Tenner said the organization will need to examine its mission and decide which are its most effective programs and investments. In Washington, D.C., a city with one of the highest rates of HIV/AIDS in the country, choosing which programs to discontinue is no easy task.

“Cutting back on services seems painful and ill-advised for the community we serve,” said Tenner. “But we need to focus on where our help is needed most. Where is our greatest investment?”

For GMHC, that means continuing to devote funds for essential post-diagnosis counseling. Carrasquillo, a volunteer at the organization, has been living with HIV for 16 years, and was a client at GMHC for eight years. He knows first-hand the value of counselling and therapy as integral parts of HIV/AIDS treatment.

“We need counseling and we need education,” said Carrasquillo, who himself sought counseling at GMHC following his diagnosis. “The depression and the stress are the two weapons that can destroy a person’s immune system to the point where they don’t want to live anymore.”

Carrasquillo said the economic downturn is contributing to the shortage of counselors and therapists, because there is simply not enough money to pay them. He also blames this shortage on the politics of New York’s state government.

“Our lovely Governor Paterson has been such a bloodsucker in taking away our finances to keep programs running,” said Carrasquillo. “He needs to give us back our financial resources.”

Arthur Webb, President and CEO of Village Care of New York, a community-based, non-profit organization that provides support to many older adults living with HIV/AIDS, is also awaiting Governor Paterson’s budget for the coming year, set to be released on December 16. Webb is anticipating that hundreds of millions of dollars will be cut from the state Medicaid program, which will likely translate into cuts upwards of 7 million dollars at Village Care.

“Eighty–five  percent of our revenues come from the government and Medicaid,” said Webb. “We’re so dependent on government revenues, which are dependent on the economy, so we’re being directly impacted.”

Webb said that he has been anticipating budget cuts since July, and has since been working towards reducing overhead and expenditures involved with Village Care’s general operations. So far, 16 percent of employees at the corporate offices have been laid off, and the organization is attempting to streamline its programs wherever possible.

“What we’re going through now is as bad as I’ve ever seen it,” said Webb. “We have to find ways to protect the people we serve. We are probably going to see some programs disappear, but we will not compromise on patient care. As for our ability to provide the full range of services? Only time will tell.”

Webb said that one way for non-profit organizations to ensure survival amidst economic instability is through partnerships and collaboration. Working together will not only strengthen existing programs, but will also ensure that smaller organizations are better equipped to deal with financial challenges.

“Collaboration is good any time, but it’s critical now,” said Webb. “We need to see how we can get some synergy.”

“The situation won’t get any better for a while,” said Kickul. “So the biggest thing that non-profit organizations have to do is be really creative in how they find resources, whether it’s human capital or financial capital.”

In addition to maximizing resources, Kickul advocates the need for non-profit organizations to show the impact of their work throughout the economic recession. By demonstrating efficacy and encouraging results – particularly to key funders – organizations can help ensure that they will continue to receive financial support once the economy stabilizes.

To achieve this, Kickul suggests utilizing the enormous capabilities of the internet to communicate directly to funders and members of the public. Organizations can, for example, maintain a blog, using limited resources, that details the progress and measures the results of their various programs and services.

Richard Becker, President of Copywrite, Ink, a communications consulting firm, sees even greater potential with the internet and social media. Becker is a communications consultant for BlogCatalog, an online directory and social community for bloggers. With Tony Berkman, President of BlogCatalog, Becker co-founded BloggersUnite, a program that features online community awareness campaigns. BloggersUnite encourages bloggers from around the world to come together to raise awareness for issues or organizations that are underserved by more traditional media outlets. So far, BloggersUnite has run six campaigns for issues ranging from refugees to human rights. The responses have been overwhelming, and some campaigns have even reached beyond the online world. During their human rights campaign, the staggering 1.2 million blog posts received attention by CNN.

For their latest drive, BloggersUnite was approached by the National Institute of Drug Abuse (NIDA) to participate in raising awareness on World AIDS Day. On December 1, approximately 250,000 blog posts were contributed to the BloggersUnite World AIDS Day campaign.

“It helps to build awareness in the community,” said Becker. “It gets people engaged in the issue, and some go on to become stakeholders in the cause. This type of social media is powerful because it makes people feel like they are part of something, and it makes it easy for them to participate.”

BloggersUnite will continue to run three campaigns per year on social awareness issues. One way Berkman and Becker plan to improve the site is by enabling non-profit organizations to register upcoming events taking place in various cities throughout the world.

Yet, the bulk of HIV/AIDS treatment and prevention requires non-profit organizations to continue to operate on the ground.

“Social networking can certainly help reduce stigma,” said Tenner of Metro TeenAIDS. “We reach a lot of people online. But at the end of the day, you can’t get tested for HIV online, and you can’t get medicine or medical support online. What we know about HIV is that information alone is not enough.”

Still, the capabilities of the internet, and the potential of the social media movement, represent creative ways in which non-profit organizations can further their fight against HIV/AIDS in spite of diminishing funds. In order to maintain effective programs and services in the face of the economic crisis, non-profit organizations will be required to prioritize their resources, and take different approaches to their outreach and support.

“It’s time to begin thinking differently,” said Webb of Village Care of New York. “Maybe then we will come out on the other side smarter and stronger.”