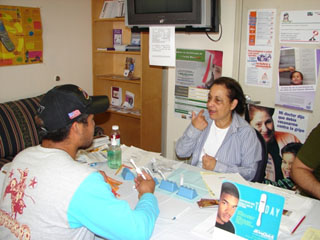 Atlanta is called the capital city of the “New South” for its economic prosperity and cultural diversity.  But in this sprawling Southern metropolis a silent crisis looms in the shadows threatening the lives of thousands of Latinos.  Marginalized by mainstream society and silenced by stigma, many Latinos confront HIV without the aid of social services or each other.

Fear, stigma, and language barriers prevent Latinos from accessing HIV education and treatment services.  Because of this many people discover they are infected only when it is too late- when the disease has already ravaged their bodies.  The Deep South Report, released on December 1st by the Latino Commission on AIDS, exposes this crisis with a grim collection of data from seven southern states, including Georgia.

According to the report, Latinos comprise 14% of the population in the United States, but they represent 22% of HIV diagnoses.  This disproportion is even more striking in Georgia’s Latino community where Latinos represent 8% of the state’s population yet they account for nearly 18% of AIDS cases.

“HIV has really shifted in terms of new cases,” said Tim Frasca, author of the Deep South Report. “The rates are higher in the South than anywhere else.  Aside from the Latino population, that is really where the problem of an entrenched epidemic that doesn’t seem to be coming down is.”

The report details the obstacles to prevention and treatment of HIV for Latinos.  Many Latinos are undocumented and do not speak English.  They are unable to access health services for fear of being caught by the government and deported. Also, many services and organizations lack sufficient, if any, bilingual employees.  Outreach and prevention education are very difficult under these circumstances.

“These are guys who don’t know where to go to the doctor when they get injured,” Frasca said. “They could have a broken bone and not know what to do.  And we’re going to try to talk to them about a disease they might get eight years from now?”

For undocumented immigrants infected with HIV, treatment is further complicated by the logistics of transportation.

“We’re talking about a trip in an automobile to go to the doctor,” Frasca said. “If you don’t have a driver’s license, which you can’t get if you’re not a legal resident, that’s a dangerous situation.  Every time you get in the car and drive illegally you can get stopped and that could have consequences for your life.”

Maria Rivas is the Hispanic Outreach Coordinator  for AID Atlanta, an organization that provides HIV outreach and counseling. She heads a small team of seven people that facilitates prevention education and testing for the Latino community.

“People don’t want to be perceived as having HIV,” she said.  “There is a fear of being rejected, a fear to talk about it, and a fear to not be able to access the service.  Workshops create a safe environment that has information about prevention, access to services, safer sex, and social issues that are affecting them.”

Rivas’ workshops focus on safe sex and debunking the myths about how HIV is contracted.  She has worked in the immigrant community in Atlanta for 19 years. She said that at first the stigma of HIV was so great that they had to bundle HIV testing in with other health services, such as diabetes screening, to get people tested.  Then she had to gain the trust of the community.

“It was difficult to approach them and discuss [AIDS] openly,” she said.  “To get credibility among them we have to be in community everyday, and then they approach us.  It took us almost 20 years to gain trust and create new services and improve existing ones.”

Despite two decades of work, Rivas still encounters many of the same problems she faced in the 80’s.  The biggest problem is that people are not diagnosed with HIV until they start experiencing symptoms.  Often times it is too late for effective treatment.

“Many people get the information too late and they’re so embarrassed to get tested,” Rivas said.  “They are undocumented and they keep quiet until they start having symptoms. Then they get very sick and go to the hospital and are diagnosed with full-blown AIDS.”

This was the case for Luis ,45, who did not want to give his real name, an undocumented immigrant from Mexico. Luis  immigrated to the United States in 1986 and  lived in California and Illinois before moving to Atlanta in 2000.  He was diagnosed with HIV/AIDS last September and believes he contracted the disease through sex with a man.

“I was so sick,” he said.  “I had diarrhea. I had bumps all over my body.  I was fainting and vomiting. I was tired all the time and I lost my strength.”

That is when he decided to go to the doctor.  Lacking health insurance, he paid $150 for the blood test that showed he was not only HIV positive but fighting full-blown AIDS.  His symptoms forced him to stay home from work and alienated him from his friends.

Unable to work, he was fired from his job, and without an income he could not pay rent for his apartment.  His friends and family turned their backs on him when they learned he was infected with AIDS.

“My whole family knows about my illness,” he said. “They don’t support me.  They closed their doors on me.  I lost all of my friends because of this.  They don’t want to be around me because they are afraid they’ll contract HIV.”

Luis now sleeps on a couch in a shared apartment. His roommates do not know he has AIDS, and he is afraid to tell them for fear of being kicked out. He relies on the counseling at AID Atlanta.  Rivas connected him with a private clinic that offers free treatment without proof of legal status.  He has regained much of his health, but he still lives in a community where no amount of medication can treat the stigma of an HIV/AIDS diagnosis, he said.

Still, his outlook is positive.

“I am very sick but I keep smiling because I am not afraid of death,” he said.

“I am illegal. I am not from this country, but God is with me.  He has given me people who help me.  I have conquered death with the help of God.  And when I die, this disease will die with me.”

Rivas, said Latinos need  to create a safe space within the community where people like Luis can come forward with their stories.

“We still have to fight a little more, struggle a little more,” she said.  “Now we are trying to empower people in the community to mobilize and come to the table to negotiate and advocate for themselves.”