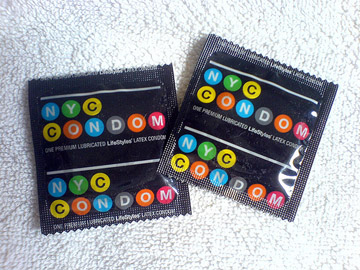 Condoms and the lack of sex education in schools are at the center of the debate of HIV/AIDS education. Photo by Victoria Peckham

Those who work closely with America’s youth say this trend will continue, unless there is an evolution in the way we educate teens about sex. According to experts, there is a vast divide between what teens in the United States know about sex and what they need to know about protecting themselves. This gap is being blamed mostly on abstinence-only education and with $50 million of federal money budgeted for this type of education in 2008, as well as studies being released that attack the efficacy of these programs, activists are crying out for change.

Rana Barar, the Program Manager of Sex, etc, a website and magazine that is written and produced by teens and deals solely with issues of sexuality sees the lack of sex education in high schools as a tremendous hurdle to overcome in lowering the rates of HIV infection among young people.

“I think it’s tragic because teens are not getting the information they need to keep themselves safe and that’s irresponsible of us as adults to deprive them of that information,” Barar said.

With three federal funding programs dedicated to abstinence-only education, it has become the prevalent form of sex education in America’s high schools.

“I think that the culture in the last eight years has been really strongly centered around abstinence-only until marriage education and at best it presents flawed information and at worst it presents outright lies,” Barar said. “That does not help kids stay safe, that does not give them the skills to reduce their risk taking. Age appropriate comprehensive sexuality education has been shown to help teens reduce their risk.”

The main issue she sees with the abstinence-only education is that it provides no information about contraceptives of any kind except to stress their failure rate.

“If young people don’t think condoms are effective in preventing HIV, then they don’t think they have to use them and that’s a huge myth we have to dispel that has been created by the abstinence-only campaign,” Barar said. “It’s hard enough to get them to use them to begin with.”

The CDC reported that in 2007, 39% of currently sexually active high school students did not use a condom during their last sexual encounter. With research showing that the correct and consistent use of a condom can reduce the risk of STD transmission, including HIV infection and the number of infected teens showing no signs of decreasing, activists are desperately searching for ways to turn this trend around.

James Learned, the Director of Programs at the Community HIV/AIDS Mobilization Project (CHAMP) launched a campaign in New York City led by youth called, “Find the Condoms in Your School.” The program encouraged teens to get involved and offered training to help teens become active in the fight for free condom access in their schools.

All high schools in New York City are required to provide free condoms to students and Learned wants to ensure that teens are aware of this. He feels that abstinence-only education can be detrimental to youth’s views on condom efficacy.

Even with the growing, strong opposition to abstinence-focused education, there are still organizations that think that the abstinence approach is effective, especially as a way to provide support for teens who do not want to become sexually active.

Richard Urban, the Director of Ultra Teen Choice in Washington DC, offers abstinence directive education through his foundation to youth in the area.  He maintains that youth from the ages of 12-18 should not be having sex and offers support for teens that want to abstain.

“We need a directive approach, we need to set a standard for our youth,” Urban said. “Why only have high expectations for academics, but when it comes to sexual activity, say well you’re going to have sex anyway, so just use condoms. That is not a really high expectation.”

Washington D.C., where Ultra Teen Choice is located, has the distinction of having the highest new infection rate in the country, there are 128.4 cases of HIV/AIDS per 100,000 people compared to the national average of 14 per 100,000. This does not discourage Urban, in fact, in an opinion piece published in the Washington Times, he expressed his dismay at being told to cease operations at all D.C. public schools. Urban maintains that 22 percent more high school youth in the city are abstaining from sex than 14 years ago and feels that it is negligent to completely disregard the teens that want to remain abstinent.

“More than 50% of teens are abstaining so why would you not want to support and encourage that?” Urban said.

While Urban asserts that abstinence-only education has its place in sex education, recent studies have found that it can actually deter contraceptive use among sexually active teens. Conversely, many studies have been released that show concrete evidence that comprehensive sex education programs that provide information about abstinence and contraception are effective in delaying sexual activity among teens and also reducing their number of partners.

At Philadelphia FIGHT, a comprehensive AIDS service organization, the Youth Health Empowerment Program (YHEP) strives to close the gap in the information that teens are receiving about sex. They want to ensure that youth are getting all of the information they need to protect themselves. YHEP was founded in 1994 to reduce sexually transmitted infections in Philadelphia and since then has evolved into a community organization that provides counseling services, empowerment coaches, free rapid HIV testing, prevention counselors and many other valuable resources to Philadelphia youth who desperately need them.

Robin Brennan, the Program Director at YHEP stresses the importance of complete sexual education and offering young people as many different options to educate themselves as possible.

“Overall education and taking the moral component out of it and talking about what can potentially prevent sexually transmitted infection in our youth overall is crucial,” Brennan said. “Our job is to make sure our children and our youth are informed and they have the option to at least make informed decisions.”

Sophavy Phuong started off with YHEP as a peer educator when she was a junior in high school, then moved into a role as a family planning counselor. Now at 22, she works at YHEP as an office manager.  She said that many of her friends do not have a lot of money and when they do have extra cash, would rather go see a movie than buy condoms. She said that because of YHEP and the access to free condoms that it provided, she has been able to help her peers stay safe.

“I was able to distribute condoms to my friends that urgently needed them,” she said.

Phuong said that before she came to YHEP  she knew nothing about the female reproductive organs and now she is responsible for helping to educate teens in her community.

Hearing stories like these from young adults like Phuong only strengthens Brennan’s sense of urgency to promote the importance of comprehensive sex education to youth. For Brennan, honest, straightforward information is the only way to slow the alarming rate of infection in America’s youth.

“I think a lot of times we talk about family values, moral values and it is killing our youth,” Brennan said. “With abstinence-only programs, we are robbing our youth of valuable information that can save their lives.”