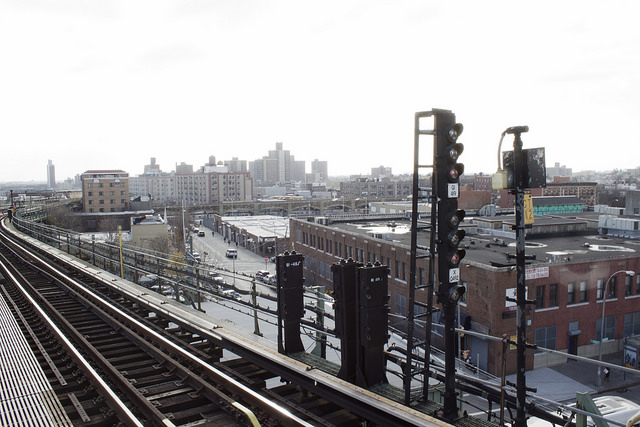 A view of Brownsville from the Broadway Junction subway stop. Photo by Elizabeth Arakelian

The Brownsville, Brooklyn of David Alexander’s youth was a vibrant one. He remembers movie theaters every few blocks and the Belmont Avenue open air market teeming with people eager to buy their groceries.

Alexander said those were glory days in his eyes, when there was “vigor” in the Brownsville community that has since escaped the neighborhood.

“Everything else has been changed, closed down, and nothing has been put there to bring back that vibrancy that was once there,” said Alexander, 64, of the collapse of Belmont Avenue. “It really was a thriving community until it just imploded.”

As a resident of Brownsville for 53 years, Alexander has seen Brownsville evolve over the years and he can name several things he believes contributed to what he calls the community’s “demise.” But perhaps was most crystallizes life in Brownsville today is it’s life expectancy rate.

Seventy-four is the average age that residents of Brownsville live to be and it is the lowest rate of life expectancy in New York City according to the City’s Health Department. For comparison, residents of the Financial District live on average to be 85 years old — that’s 11 more years. Brownsville also sets the record of the highest rate of premature deaths, or deaths before 65, and the infant mortality rate is the fourth highest in New York City.

It is not exactly clear, however, why residents of Brownsville are passing away so much earlier than their fellow New Yorkers. Brownsville is certainly grittier than its neighbors — it is the poorest neighborhood in Brooklyn with 37 percent of residents living below the federal poverty line — but the leading causes of death in Brownsville are the exact same as other, more affluent areas of New York City: heart disease and cancer.

“I was surprised, but I was also happy because you can prevent heart disease,” said Eva Gordon, a Brooklyn native who now serves as a coordinator for the Community Partnership Program, a nonprofit that serves to connect local residents with life improving resources.

Gordon was surprised to learn that crime related deaths were not more common and homicide was the sixth leading cause of death in Brownsville, to her relief.

“Homicide is hard because there is no name on the bullet,” said Gordon.

Gordon grew up in the communities adjacent to Brownsville, namely the Flatbush and Crown Heights neighborhoods, and has seen first hand the inner workings of life in Brownsville as a caseworker in previous years.

“I’ve been going to Brownsville all of my life. It’s not a foreign neighborhood to me,” said Gordon, noting that the community has had a bad reputation for a long time. “It kind of has that reputation that ‘nothing good ever comes from Brownsville’.”

Even amongst Brooklynites, “Brownsville has had a negative connotation of being the murder capital of Brooklyn,” acknowledged Community Board 16’s District Manager Viola Greene-Walker.

Unlike other Brooklyn neighborhoods, Brownsville has yet to gentrify and in turn experience the revitalization that has made neighborhoods like Greenpoint trendy and pricey. Instead of the $5 lattes found at craft coffee shops in Williamsburg, Brownsville hosts 99 Cents stores and unhealthy, but cheap, food options.

“It’s more living out of cans and the produce that they do sell is not of quality so these are things that I have to fight to improve which would help for us to be more physically healthy than where we are,” said Alexander, who sits on a number of boards through the community district.

While access to healthy food is certainly an aspect that affects longevity, stress of daily life in Brownsville is another factor. Brownsville has the highest rate of public housing in America meaning financial stability is rare among residents.

“I think a lot of its unemployment. If you’re not able to help yourself financially, how is your stress level? How is your blood pressure? How do you provide for yourself?” said Gordon. “If you’re in public housing and not your own house, how does that affect your stress levels too?”

These stressors have contributed to an overall lower quality of life compared with other New York City neighborhoods said Green-Walker.

“I attribute that to access, or lack of access, to health care,” said Greene-Walker. “Often times residents have other factors such as… being uninsured or under-insured. Just different stresses in life living in the community that their health care might take a back seat to other issues that they’re faced with.”

One of the services that Gordon’s nonprofit offers is to connect individuals to life improving services, be that financial or health oriented, but convincing Brownsville residents to take advantage of these services is often difficult.

“The one thing I must say is that those who want to come out will come out, but you have to fight tooth and nail to get them to come out sometimes,” said Gordon.

Alexander is one Brownsville resident who does not need encouragement to get out and participate in life in Brownsville as he has made it his mission to return a glimmer of his glory days to the community.

“I had an opportunity to move out of Brownsville and I elected to remain to ensure that Brownsville gets back its vigor that it had when I was first here,” said Alexander.

One way he is doing that is by reaching out to the next generation. As the chairperson of the Brownsville Youth Committee Alexander hopes to provide current youth with the “more substantial” programs he enjoyed as a child.

“We had Boy Scouts, Girl Scouts, — we don’t have that anymore,” he said. “We had different types of clubs. They weren’t gangs, they were clubs, where we would attend and pay due and go on trips and go on things like that and I’m trying to get that back.”

Alexander hopes that providing the youth more support may in turn lead to less crime and more involved adults, something that is lacking in the community.

“Right now the community is starting to pull itself back up. It’s a slow process but we’re starting to be more sustaining,” said Alexander. “We’re a work in progress is guess is best thing I could say.”