Medical students protest to save Obamacare 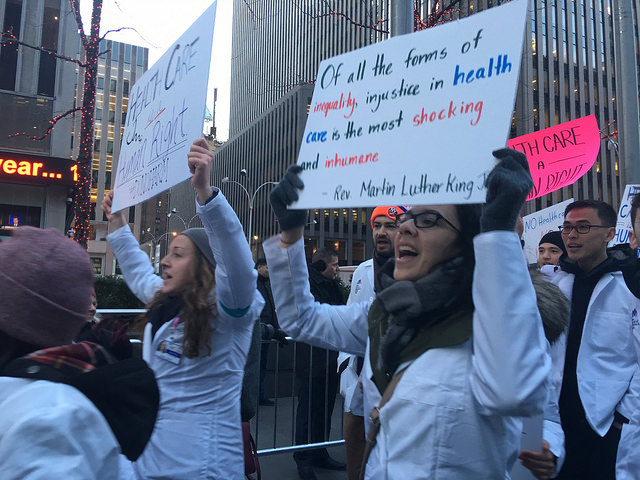 Medical students skip class to protest the repeal of Obamacare in front of the Fox News building in Midtown, Manhattan. Photo by Sophie Herbut

In front of the Fox News building on Avenue of the Americas this evening, a band of mostly medical students in white coats, huddled together and protested against the repeal of the Affordable Care Act as cars zoomed by next to them, some honking in agreement.

“We believe that it’s important to protect people’s healthcare,” said Alex Gomez, a fourth-year medical student. “And protecting the ACA is the first step to doing that.”

It was beginning to turn dark as another large group of medical students crossed the streets to join the crowd already in place. Their signs were colorful and creative, some quoted Dr. Martin Luther King, but the most common sign had a simple message: do no harm.

“I went into medicine so I could help people who are in pain and who needed help,” Gomez, 31, said. “We as doctors can prescribe medications, give appointment, we can perform surgery but unless we work on changing the laws we can’t be sure out patients stay healthy.”

Trump has made it his initiative to repeal the ACA, or Obamacare, since his presidential campaign. This protest comes after Trump signed an executive order to “minimize the unwarranted economic and regulatory burdens of the Act.”  Many people believe this is the first step in completely repealing the ACA, leaving millions uninsured.

Gomez said that while the ACA is not perfect, it is still more comprehensive than anything be proposed to replace it. He said he would like to see it reformed, not repealed.

Toby Cohen, a third-year medical student, said that the repercussions of repealing Obamacare would affect his sister who is self-employed. Without the ACA, his sister’s insurance rate would be much more expensive than that of an employee of a large organization. 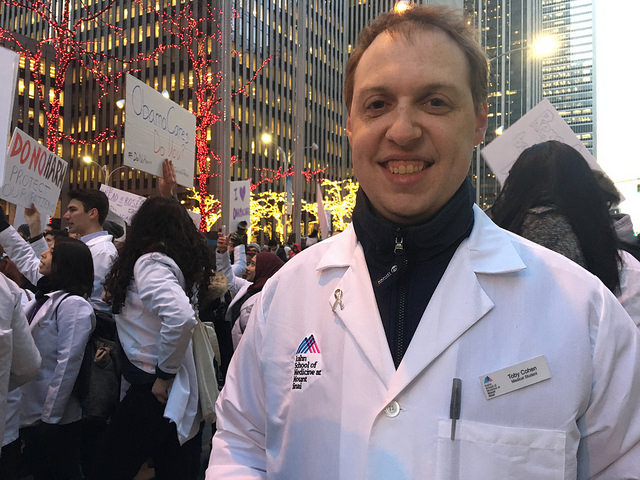 Toby Cohen, 29, keeps his sister in mind as he protests the repeal of Obamacare. She is self-employed and would have a more expensive insurance rate without the ACA. Photo By Sophie Herbut

“Insurance premiums are cheaper when you buy in bulk,” Cohen, 29, said. “It is expensive for a lot of people but the other options are much more expensive.”

The other options would either be in purchasing insurance individually or going without it and paying for hospital bills.

“People without insurance don’t see their doctors regularly,” said Cohen. “They can end up in the emergency room and end up bankrupt paying those bills.”

Many have predicted tragedies that could happen if the ACA is repealed and it is not unreasonable to think the worst when someone’s life is at risk.

“There is literature that says that if the ACA is repealed 43,000 people will die,” Gomez said.

That statistic is what inspired the protesters to drop on the sidewalk suddenly, lie down and stay quiet for a few minutes, feigning death. 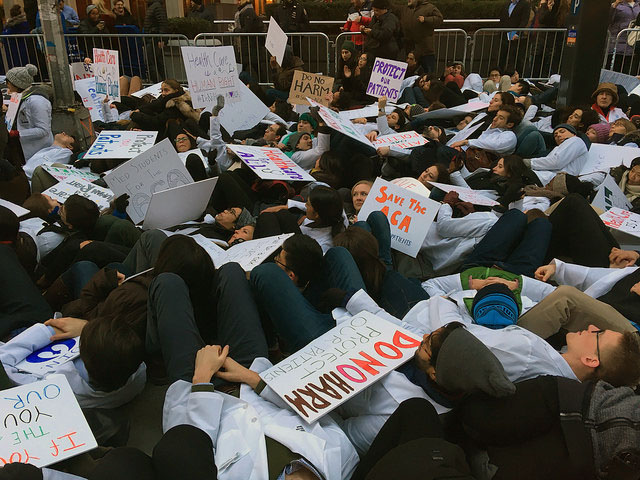 Protestors fall to the floor to symbolize the “43,000 people [who] will die” if the ACA is repealed. Photo By Sophie Herbut

Two women who had stumbled upon the protest stood on the sidelines. They were an older couple who said that they knew if they “head to the Trump tower, [they] would find a protest.”

“If they don’t have the ACA, the hospitals will eat the cost and the people will go bankrupt,” Donna Templeton, 69, said.

She works as a nurse practitioner in Lake Hopatcong, New Jersey in the mental health and addiction department. Templeton said many of her patients receive Medicaid and without it the entire department would probably be in danger.

“If the mental health patients lose their insurance they don’t get their medicine,” she said.

Templeton said that if they get rid of the pre-existing conditions clause of the ACA, her wife, Sandra Powers, might be in trouble.

Powers said she’s disagreed with politicians in the past but it’s never been this divisive before but she says that she continues to protest and fight for her grandkids.

“I feel like they’re systematically trying to get rid of human rights,” she said.