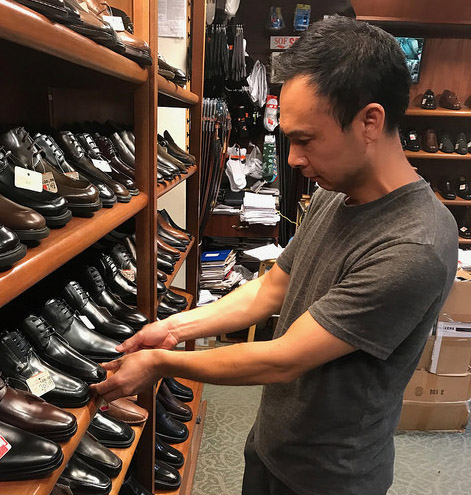 Mark Weng is still very grateful for surviving the September 11 terrorist attacks. He’s owned this business for 22 years an it brings him “joy everyday”.

Mark Weng is grateful for surviving the September 11th terrorist attacks. Many of the customers at Footmart, the Lower Manhattan shoe store he owns, worked at the World Trade Center. Photo by Chinedu Onyemaobi

Life has never been the same for Mark Weng and David Martinez, local business owners whose shoe store was near the World Trade Center.

Seventeen years after the terrorist attack, they are still haunted. Martinez had to battle anxiety, and Weng refuses to go anywhere close to Ground Zero, the replay of the plane hitting the towers still vivid in his memory.

Weng is forever grateful he was not one of the victims of the terrorist attack.

“One day can change your life forever,” he said.

Weng and Martinez owned and worked at Footmart on Fulton Street. They saw hundreds of customers, the majority worked at the Twin Towers. Those people became their friends.

“People came through here every day looking for shoes, all sorts of people, and you begin to familiarize yourself with some,” said Weng.

Their memories of 9/11 are still vivid.

It was just after 9:15 a.m. when Martinez of Flushing, Queens, was on his way to work. His train came to a halt right before the Fulton Street stop. Confused passengers on the train waited to hear why they were being delayed.

“Everyone was lost at what was going on,” Martinez said.

Finally, after 15 minutes, the train jolted and worked its way up towards the Fulton Street Station. Unaware of the events taking place above him, Martinez came out and headed toward work as if it was a normal day. But there was something wrong. Approaching the store, he noticed the gate was closed, he also noticed something else.

“I looked up and saw a giant fireball coming from the side of one of the buildings,” he said “I didn’t understand the magnitude of the situation, it all looked like an accident.”

What he failed to realize was he was staring at the deadliest terrorist attack on U.S. soil.

As people filled the streets ravaged with fear, Martinez had to make sure Weng and his other workers were not coming anywhere toward Ground Zero.

But Weng’s train was on the Williamsburg Bridge. He watched the attack through the train’s windows.

“I also thought it was an accident,” he said. “But when I saw the second plane hit, I knew something was wrong”.

Weng continued to make his commute into Manhattan heading west on Centre Street, as the dark reality of the event came full circle.

“I looked up at the tower and saw people jumping, at first I didn’t want to believe it was real,” he said.

Meanwhile Martinez was looking for a pay phone to call Weng and the others. He spotted one on the corner of Nassau and Fulton street and headed towards it. Moving frantically, he dropped his quarter, stopped, and noticed the quarter bouncing up and down. He turned his head, and saw one of the towers falling as a huge mushroom cloud of debris and smoke whipped its way toward him. He ran with others fleeing the debris filled cloud.

“It was like a nuclear bomb had went off or the equivalent to hundred of planes flying over you at once,” he said.

Finding a nearby subway station, he ran into it and waited for a sign to let him know things were okay. After 30 minutes, he made his way up out of the subway and arrived to a street of floating papers, dust and the smell of burning cars.

Four weeks later the men were allowed to go back to the store and recover items.

“I came back to the store and it was filled with white ash,” Weng said. “The pants I had on were black, by the time I left they were gray.”

Fortunately the store wasn’t severely damaged and the business eventually reopened. Weng is forever grateful for surviving the attacks.

“I can’t believe it’s been 17 years since,” he said. “I pray nothing like that happens again.”