Memories of Life in Cuba 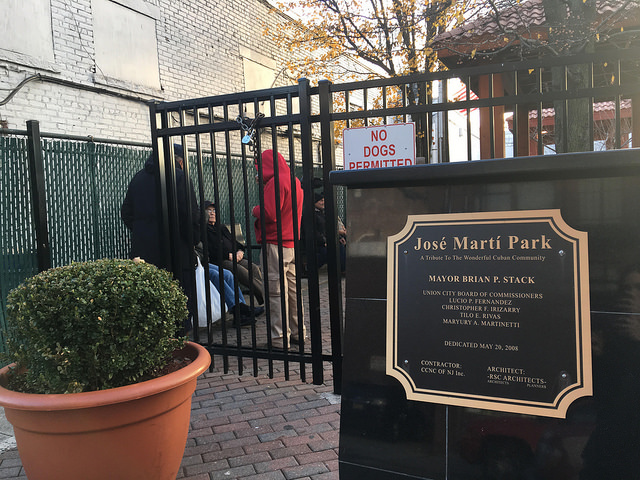 Jose Marti Park in Union City was created in 2008 as a tribute for the Cuban community in the area. Photo by Sophie Herbut

The Jose Marti Park in Union City, is a small, gated park named after the famous Cuban poet. It was once nicely decorated with a tile Cuban flag behind a bust of Jose Marti and lined portraits of famous Cubans. Now the tiles have been taken down and the small display has been weathered and barely recognizable.

But it is still a gathering place for the older local Cuban men. A place to smoke cigars, play dominos, talk about family, memories and Cuba.

These men came to America with nothing except an idea. They left their families, friends and the few things they owned for freedom. They came for a chance to work, earn and build a better life. 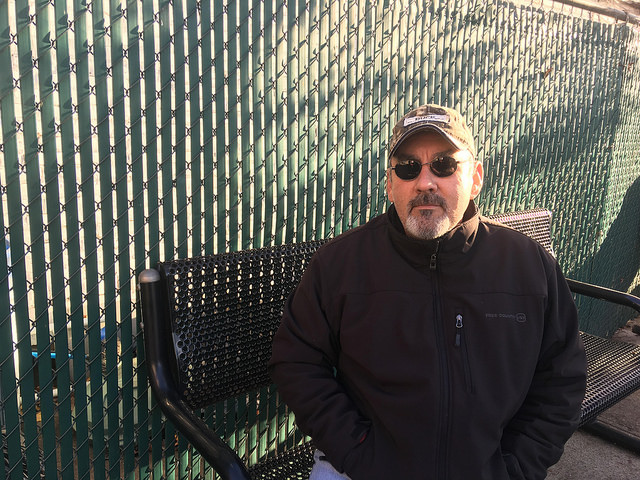 Andreu, 66, always comes to Jose Marti park every time he gets a chance. Many Cubans in the area gather to play dominos or smoke cigars. Photo by Sophie Herbut

“Personally, my country is here,” Fernando Andreu said in Spanish recently at the park. “I have my children and grandchildren here. Cuba is lost now.”

Fidel Castro’s death in November shocked the Cubans of Union City. It was a day that brought, reflection and pain.

Many Cubans immigrated to Union City to seek political and economic freedom after Fidel Castro gained power. North Jersey and New York have the second highest Cuban population in the United States.  Their influence gave Union City the nickname “Havana on the Hudson.”

Now after Castro’s death, many older Cuban-Americans are not expecting any liberation to come to the island.

“With the communism, there are different people who live there,” Andreu,66, said. “They don’t think the same as we do. [Cuba] is not the same.”

Born in the capital of Cuba, Havana, Andreu and his family left when he was eight years old in the 1960s, as Castro was gaining control of the government. Because his dad was taken as a political prisoner for working in the previous government, Andreu left Cuba with only his mom and his sister.

“When we came, we were political refugees,” said Andreu. “[Now] Cubans step foot here and automatically have [citizenship]. Many people from Latin America would love to have the same thing.”

Andreu and his family came with nothing and lived in poverty. They collected welfare   until his mom was able to get a job at a factory to support the family. He learned what it meant to work and earn his own keep. After spending most of his life in the U.S., he’s disillusioned at the thought of a free Cuba.

Miguel Alonso, 60, doesn’t believe Castro’s death meant anything for Cuba’s freedom. He said the hold of communism on the country is far greater than the one man.

“Fidel died to me 10 years ago,” Alonso said in Spanish. “They are just announcing it now.”

Alonso grew up in Havana, under Castro’s government. He left when he was 24, by himself.

“I was young, I came on a boat with the desire to come to the United States for liberty,” Alonso said. “What all Cubans want.”

Alonso escaped through the port of Mariel on April 27, 1980. The port was opened temporarily and a large number of rafts and boats full of people entered the U.S. He said it was the quickest and easiest way to escape.

“I knew people in the United States,” said Alonso. “I knew here you had to work.”

Alonso immediately got to work in construction because that’s what he worked as in Cuba. He had the skills and the opportunity. He said while he grew up around communism, he still believed in democracy.

“No one agrees with communism,” he said. “Communism demands people to be communist. It didn’t work in Europe; it definitely would not work [in Cuba].”

Alonso also said that with Trump as president, he’s unsure where the future of Cuban-Americans are headed. 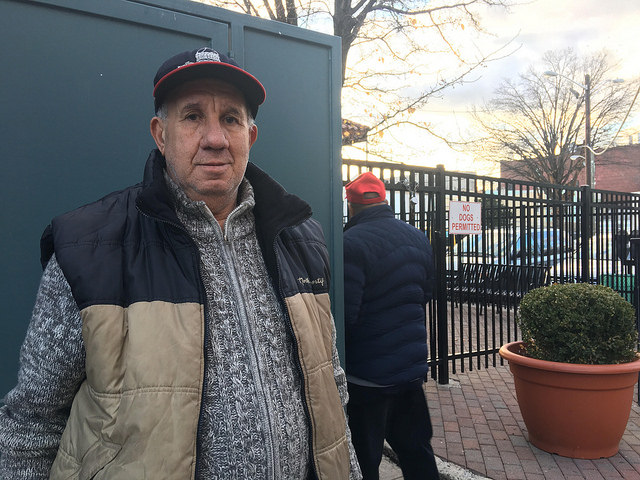 Guzman, 63, steps out to light a cigar by Jose Marti Park. A park made as a tribute to the Cubans of Union City, NJ. Photo by Sophie Herbut

Francisco Guzman, 63, lit a cigar as he stood against the green fence of the park.

Guzman grew up in Havana and he came to the U.S. when he was 26, after he sought asylum in the Peruvian embassy.

“One Saturday when they said that people could enter, I just went,” said Guzman in Spanish. “I spent 13 days in the embassy.”

Guzman immediately started working when he arrived to the U.S., working in a factory at first in Philadelphia. When he moved to Union City, he started working in agriculture. Guzman’s parents and his brother escaped Cuba, but his sister is still there. He said she will never leave so he helps her with as much as he can.

“I send her clothes and I give her money so she can buy what she needs,” Guzman said.

He said many Cubans who used to live in Union City have moved out to look for jobs and start their families. The ones who’ve stayed have been there for most of their lives.

“The Capitalist goes wherever there’s a job,” said Rijo Alvarez, 50.

Alvarez sat on one of the tables of the park with a cigar poised in his hand. He spoke casually about his life as though it was as common as an afternoon walk. He listed all the jobs he had from construction to electrical work.

“I’ve done things here I wouldn’t have ever been about to do in my country,” said Alvarez in Spanish. “My [Cuban] brothers would have stepped on my head.”

Alvarez moved from Cuba to New Jersey when he was 14. His father was a political prisoner, but was able to take his entire family and leave the island. He was one of the lucky ones. Alvarez’s parents started working immediately when they arrived and Alvarez was enrolled in school.

Alvarez said Castro’s death didn’t faze him. He was American. For him, Castro has been dead for years. But he said that both the U.S. and Cuba would have to change.

“Things have to change [in the U.S.],” said Alvarez. “Cubans aren’t the only ones who deserve the treatment they’re getting. All the Latin American brothers also deserve it. We should all be equal”