MetroCard artist sparks debate over use of discarded transit materials 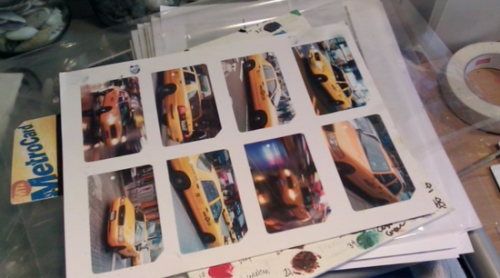 Art by Victoria Hunter McKenzie, who paints New York iconography on the back of used Metropolitan Transportation Authority (MTA) MetroCards. She was approached by MTA officials in April with concerns regarding copyright infringement. Photo by Eva Saviano.

Until recently, no one had really heard of Victoria Hunter McKenzie. But she—and her now infamous MetroCard oil paintings—just got a huge media boost.

The East Village blog EV Grieve, and the much larger news blog Gothamist reported on the Metropolitan Transportation Authority’s (MTA) effort to discuss a licensing deal and fee with McKenzie.

“Initially, I had left the magnetic strip visible and the little strip of color that says ‘Please insert this way,’” said McKenzie of the East Village. “Nothing else was visible. But I had included a photograph of what it looked like before I painted it. “

As misappropriated use of MetroCards and other transit materials has become increasingly common, MTA officials have had more run-ins with artists like McKenzie.

Peter Drake, Dean of the New York Academy of the Arts, or the NYAA, said the first artist he knew to paint on MetroCards was NYAA student Imogen Slater.

Slater, 33, came to New York from England in 2009 to earn her graduate degree in painting from the NYAA.

“I was given an assignment to paint a series of small paintings and I wanted to do something different. In my family we have a tradition of not using things for the purpose for which they were designed,” Slater said. “I collected some [cards] from subway floors and staircases on my way home. With that surface, I made a series of self-portraits that I presented at NYAA, which then became the inspiration for the MetroCard art show.”

“It’s come up and blown over in a sense,” said Drake of concerns about MTA. “The MTA was getting a lot of attention; people were writing about them. People saw the MetroCard as kind of a metaphor for the self…there are thousands of them, billions of people. It was a nice way to build a community.”

Drake said MTA never bothered him about the exhibit since he marketed the show as “selling art that is on or on top of or built out of MetroCards.” 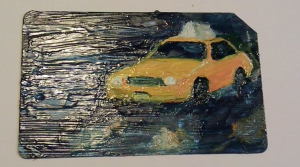 A painting by Victoria Hunter McKenzie on a discarded Metropolitan Transportation Authority (MTA) MetroCard. She saw a boost in sales after a recent run-in with MTA officials over copyright infringement.

The same could not be said for McKenzie. Three weeks ago, she received a letter from MTA that indicated her work infringed on its copyrighted intellectual property. The letter—signed by an intern at the corporation’s marketing department—stated MTA believed her work made inappropriate use of the MetroCard brand and logo.

The letter read: “The MTA has a well-established product licensing program which markets authorized versions of such products. While we have no record of your firm requesting or being granted such authorization, we are prepared to initiate discussions with you about acquiring a license from us.”

Panicked by the accusations, McKenzie removed all MetroCard-related items from her website. She later reposted the MetroCard paintings yet removed a “before picture” showing an unpainted card. McKenzie also avoided all occurrences of the word “MetroCard,” opting instead for phrasing such as “New York transit card,” and included a legal disclaimer indicating that her work is in no way endorsed by MTA.

McKenzie communicated her frustration on her personal blog, The Night Shift. The post soon garnered media attention from several news outlets, including The Village Voice and The Wall Street Journal.

“I only had 18 made,” McKenzie said of her subway card paintings, adding that she put them up for sale on Etsy.com. “People had ‘Liked’ them, but I hadn’t sold any until I blogged about it.”

McKenzie is a computer graphics artist for ABC News and considers art a side project. She thought the use of MetroCards would be an interesting new medium.

“I had been painting some New York iconography, New York water towers, and thought, well, I’ll do a series of these on the MetroCard, you know, icon on icon,” she said. “Someone buys a painting of New York and they get a little piece of New York.”

Sabina Sosa discovered McKenzie’s work when she read about her conflict with MTA.

“It was on Facebook via the New York Post newsfeed. I watched her video interview and was outraged,” Sosa said. She purchased two of VH McKenzie’s transit card paintings for $48 plus $2 shipping. “What I liked was it was different and familiar at the same time. When you’re done with a MetroCard, it’s garbage but Victoria made it into a miniature masterpiece.”

John Breznicky, a New York City artist who also use Etsy.com to sell poster-sized abstractions of a subway map, received a warning notification from MTA similar to that of McKenzie’s.

“I was initially contacted by an intern at the MTA requesting that I remove my listing immediately because I might be infringing on MTA copyrights,” Breznicky said. “I did not comply because I knew we had not used any MTA branding, logos, designs, etc. and I knew that our design had been changed significantly from the actual NYC subway map.”

Breznicky revised his Etsy listing to exclude the words “MTA” or “New York City subway” and has not been contacted again by MTA.

McKenzie said Mark Heavey, MTA Chief of Marketing and Advertising, told her the issue was not that she painted the cards, but that she used the MTA logo in her marketing.

She has not heard from MTA since the revision of her site, The Night Shift. McKenzie sold all of her transit card art and has been commissioned to paint more.