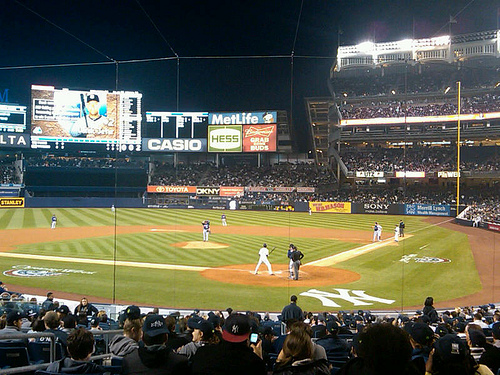 New York Yankees short stop Derek Jeter steps into the batters box at Yankee Stadium in a game against the Minnesota Twins April 5. While the Yankees have high fan attendance, other MLB teams still have trouble bringing in big crowds. Photo by Frank Riolo.

Baseball fans may have noticed even more empty seats in major league ballparks this season.

Major League Baseball has seen a decline in overall game attendance since 2008. Television viewership is also lower compared to other sports, according to the Nielsen Ratings.

Sports marketing expert Lee Igel of New York University’s School of Continuing and Professional Studies said steroid use among players from the late 1990s to the early 2000s may be to blame. MLB officials have enforced tighter performance enhancing drug policies over the last ten years, but Igel said fans are now just seeing the effect of steroid hearings and MLB’s 2005 and 2007 Mitchell Reports.

“Anytime that there is a significant event there’s a lag in time between that event actually occurring and the impact of it,” Igel said, referring to the rampant use of steroids and declining interest in the sport. “That means that there was something going on in prior years that by 2008 we started to see the effect.”

Little League participation has dropped 24 percent among children between ages 7 and 17 since 2000, according the National Sporting Goods Association.

Andrew Fletcher, a former public relations employee with MLB, said baseball is aware of the problem and has put programs in place to get kids back on the field.